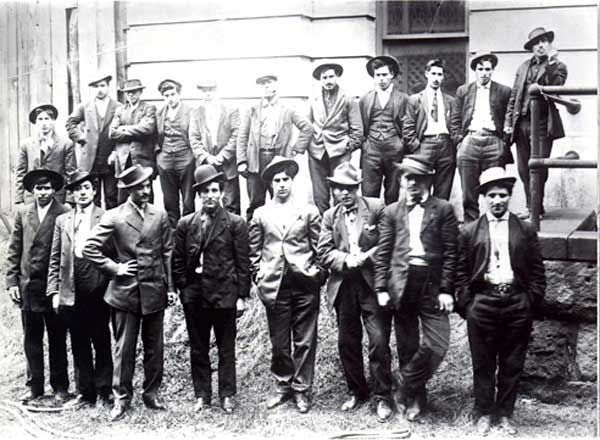 To end the bloody war between the two biggest Five Points gangs, gangleader Paul Kelly must defeat Monk Eastman in a boxing match, with the winner’s gang taking the disputed territory.

A Sicilian immigrant named Paolo Antonio Vaccareli (a.k.a Paul Kelly) starts his own street gang which he names after the neighborhood in which he lives, Five Points.

Kely: "I will RULE New York with blood".

After the Five Points Gang is more  organized, Kelly and one of his lieutenants, Frank Yale, find out that a lot of money can be made by supporting corrupt politicians. By intimidating voters and falsifying voting lists, the gang helps corrupt politicians at the top.

The only real rival of the Five Points Gang is the Monk Eastman Gang led by Monk Eastman.

A Five Pointer shoots Eastman in his belly. Eastman survives this attack and has one of his gang members shoot a Five Pointer, after which a war breaks out between the two gangs that gets his low in 1901.

Kelly, Torrio and about fifty other members of Five Points become involved in a gunfight with Monk Eastman and around fifty members of his gang. The police must withdraw because of the size of the gunfight, which lasts several hours, kills three people and injures a few dozen.

After the gunfight ends, Monk Eastman is arrested, detained for several hours and then released. A corrupt judge acquits to him when Eastman claims that he was only a casual passer when the firefight broke out.

A senior New York politician decides that a solution is needed and organizes a conversation between Kelly and Eastman. At the end of the conversation the two shake hands and the peace returns. But not for long, because less than two months later the war is in full swing again.

Again a conversation between the two men is arranged.

This time they do not think of a solution and a politician proposes to organize a boxing match. Both men agree with this proposal, and the winner will get possession of the whole area.

On the appointed day, hundreds of Five Points members and the Eastman Gang gather at a warehouse in the Bronx. Eastman and Kelly fight for two hours to see who is the best fighter. (Kelly is a boxer in his younger years, but Eastman is a larger, wider man.)

At the end of the fight, both men fail to beat the other, making the match a draw so both men let their gang members know that they are still at war. Is their any hope left that "Kelly will RULE New York" ?

The senior New York politician decides that this is no longer the case and makes sure that all corrupt officials choose Five Points. Because of this, the Eastman Gang loses all support from politicians.

In 1904 Monk Eastman is beaten unconscious by a policeman during a burglary. Eastman is subsequently convicted of this burglary and ends up in Sing Sing prison for ten years. His gang is then led by the second man of the gang in the Eastman era, called Max "Kid Twist" Zwerbach, but it is quickly shot by members of Five Points. After this murder the Eastman Gang falls apart and--

-- Kelly survives an attack, committed by two of his own lieutenants Biff Ellington and Razor Riley after a gunfight in one of his own nightclubs. He is hit three times and after his recovery he withdraws from the gang.

To end a bloody war over a disputed territory, a Five Points gang leader Paul fights rival leader Monk in a boxing match in a secret location.

I love a good crime drama! Besides a gang member dying in a boxing fight... are there other stakes? What else revealed about the story will increase the intriguing-factor?

The stakes are "who is going to çompletely control "the turf", as in most maffia crime movies. It's the end of the logline; the 'or else'... In this case, if he does not win he loses ALL of his turf. "What else revealed about the story will increase the intriguing-factor?" Good question! I do not know yet. What you must know is that this setup is just fun. If you read the English wikipedia "Five Points New York", you see this story setup is after real events.