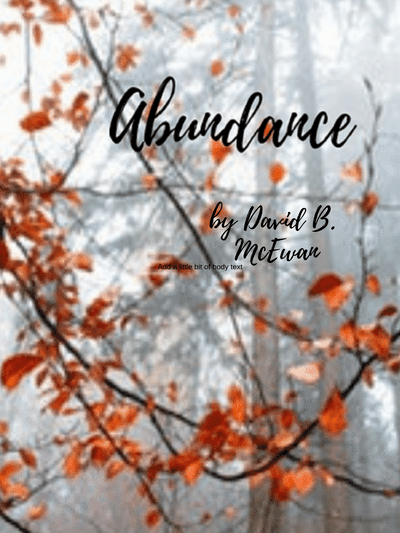 ABUNDANCE
By David B. McEwan

The West Coast murder and funeral of Daniel Coleman, the exiled son of the powerful Coleman family of New York,  brings the members of a privileged and broken family face-to-face with a lost son’s resurrected and abundant life.

Daniel Coleman, the adopted and black sheep son of Constance and David Coleman and part-heir to the Coleman Wall Street fortune, is murdered while walking home from work. Ten years earlier, in an attempt to restart his life following a long list of personal set-backs and his father's sudden death, Daniel moved to Oakland, California, cutting all ties with his turbulent past and his enormous wealth.

His sudden death at the age of 38, forces the dysfunctional members of the Coleman family to fly their private jet to Oakland for the funeral. Their inconvenient journey drops them into Daniel's world and introduces them to his beautiful wife Gabriella for the first time and Daniel's 6-year-old son, Leo. Meeting Gabriella and Leo ignites a flame within Constance, the powerful family Matriarch, that will challenge everything she has created.

Timothy, Daniel’s older brother and King of Wall Street, is forced to realign his world of power and a failing marriage, with a lost brother's rich life and the arrival of beautiful Gabriella into his world.

The sudden collision of the two very different worlds shakes the very foundations of a family not used to questions and unwelcome intrusions. Events challenge Constance Coleman to face her past and shame as a failed mother, forcing her to expose long held secrets about Daniel’s adoption and the family she ferociously protects. Gabriella, having grown up in Pinochet’s tyrannical Chile, enters a world of power and money that rekindles terrible childhood memories and a very real fear for Leo’s future. The trip west forces Timothy to look at his life with brutal honesty and contemplate difficult changes.

In this story of power, wealth, regret and courage, the super-rich worlds of Wall Street and New York society come face-to-face with the uncomplicated, yet richly abundant world of a lost son.