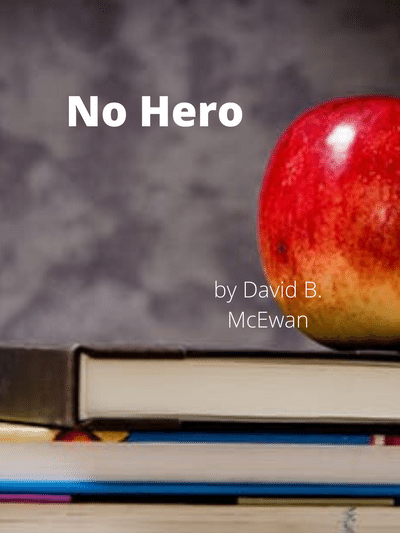 NO HERO
By David B. McEwan

Struggling with a growing sense of loneliness and irrelevance since the death of his wife, a devoted grandfather and ex-Green Beret walks into the middle of a deadly school shooting, turning his quiet life upside down.

Seventy-six-year-old Cal Devlin, widower, ex-Green Beret, law abiding citizen, has reached the point in his life where he’s beginning to feel more irrelevant by the day. Since the death of his wife, three years prior, Cal has lived with his daughter and son-in-law, Jennifer and Craig Kawalski, and their two kids, Kristen and Joshua.

Jennifer has become increasingly worried about Cal’s growing sadness and steady withdrawal from family activities. One evening, she spots a shoulder holster hanging in Cal’s closet and confronts him about having a weapon in the house, especially around his grandchildren. A spirited discussion about the danger of guns ensues and Cal promises to never carry the weapon when he’s around the children, but assures her that all is legal, with Oklahoma a right-to-carry state.

The next day, Jennifer asks Cal if he could pick the kids up from school and take them to the dentist for an after-school appointment. He agrees and the next day, drives to Thomas Jefferson Elementary to pick up Kristen and Joshua. He’s early, so he decides to head in and wait for the kids in the school foyer. Just as he’s about to walk through the school’s front door, he realizes that he’s ‘carrying’ and decides to head back to his pick-up to store his handgun. But after just a few steps, he changes his mind. Zipping up his jacket to conceal the weapon, he tells himself that no one will ever know.

Entering the school with 15 minutes to go until the end-of-day bell, Cal decides to take a walk. As he’s wandering the hallways, enjoying the quiet and the children’s colorful artwork, he hears distant pops and freezes, instantly recognizing them as the distinct sounds of an automatic weapon being fired. He listens and hears more pops and begins to move. With his instincts and 50-year-old Green Beret training on high alert, he locates the shooter in a 4th grade classroom, heavily armed and about to slaughter 25 eight-year-olds and their teacher. Cal slips into the classroom and takes out the shooter just before he’s about to shoot. After getting the children to safety he hears more pops and moves quickly in the direction of a 2nd shooter. As he closes in, he comes across the dead bodies of children and teachers. It’s a war zone.

He locates the 2nd shooter, faces him down and kills him, just as the police arrive. Suspecting that Cal may be one of the shooters, they arrest him and take him to the station for questioning. Cal insists that he is not one of the shooters and tells his story. Released after a long interrogation, he returns home with his daughter. The fall-out from the shooting begins to spin out of control as the media descends upon the Kawalski home and Cal’s life goes from quiet and irrelevant to an escalating circus of hero worship, media intimidation and personal attacks on his character.

Cal Devlin, a man who just wants to be left alone, finds himself at the center of a storm that won’t go away, forever changing his life and the quiet community of Spencer, Oklahoma.

My error. Didn't mean to rate myself!