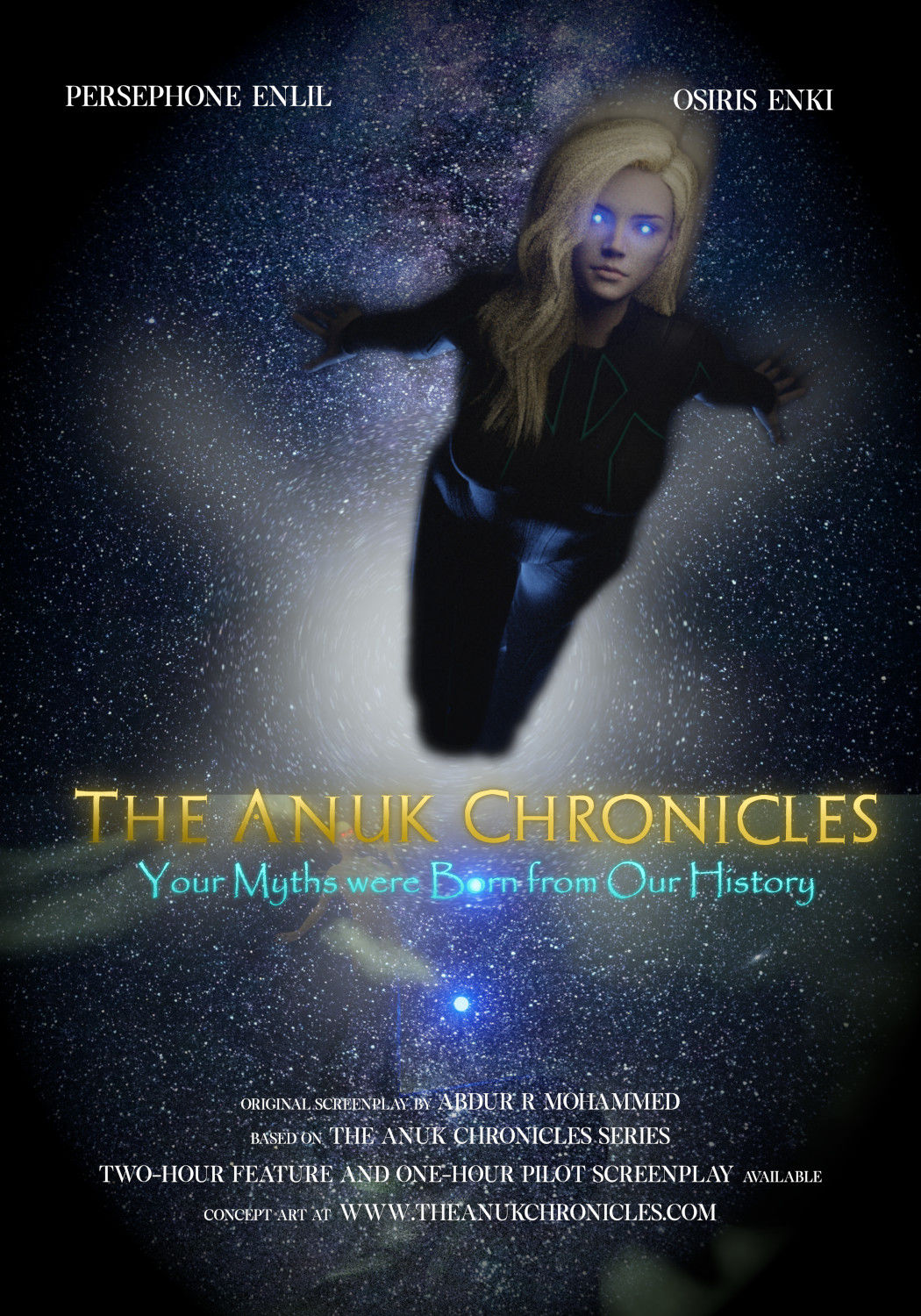 THE ANUK CHRONICLES
By Abdur Mohammed

Long ago in a technologically advanced Earth, a coup flings a princess on a dangerous path to prophecy, where she risks the destruction of humanity to regain her birthright...a burden she never wanted.

THE ANUK CHRONICLES is cinematic splendor, paying homage to Frank Herbert and Stephen Spielberg, telling a profoundly human story drenched in an awe-inspiring universe. It is a science fiction/fantasy series about the elite class of Anuk from the stars, and the last family to rule the Earth. This is an epic in the vein of DUNE, with the cinematic appeal of BLADE RUNNER. It draws on existing myths and religion to present a plausible history of when the gods were human.

The arrogance of every Lannister child in Game of Thrones... the contempt Lucifer Morningstar has for, well everything in The Chilling Adventures of Sabrina... The stifling heartbreak Conner McLeod feels when Heather dies in Highlander... the desperate plunge Paul Atreides takes into prophecy in Dune...

Princess PERSEPHONE ENLIL is like any socialite – rich, beautiful, mildly racist, and a social snob. Outwardly she is a carefree party-girl who avoids responsibility. Privately, her drug and alcohol addiction covers up the festering wound of her childhood abduction and rape. Oh, you should know, Persephone is the heir to Hyperboria-Ki…Earth.

Eons ago, the Anuk from the stars settled the Earth, and established a human civilization with the local Adamu. They entrusted rule of the planet to their descendants until the awakening – the time when Lords Enlil and Enki will rise up from stasis to judge humanity. Peace brings a golden-age; war brings annihilation. The awakening is close, and the world is in chaos.

Political anarchy is rampant within the seven Anuk banners, especially Persephone’s birth house of Enlil. A secret pact is made to marry the princess and wrestle control of the monarchy from her. OLD-MODIR, a 37,000 year old advisor to the court, facilitates the plan, but with an agenda of her own.

She sews discord amongst the houses to illicit war. Everything is going as planned, even her manipulation of Persephone to become the prophesized Jagren-av-Valdar – The Destroyer of Worlds – her tool to destroy Enlil and Enki.

Persephone is pissed about her impending marriage, and solicits the help of her lover, OSIRIS ENKI. Together they set out to destroy the reputation of her suitor, who happens to be in league with Old-Modir.

As with all villains, their arrogant cohorts veer away from the plan. With the impending marriage, VALI ENLIL, Persephone’s uncle, stands to lose his wealth and standing in the Anuk pantheon. He accepts Old-Modir’s help to torment Persephone with her childhood abductor – DASHE THE CONDEMNED. Vali is impatient and will not take a chance at failure. He unleashes the demented Dashe on Persephone, only to have the creature slaughtered when the Destroyer emerges. Vali sees the power in Persephone’s blood, and he wants it, he needs it, he gets it.

After a coup kills the king, Vali experiments with Persephone’s blood and creates a military force to invade the Holy City in Rekkam. The Holy City is a world-ending weapons store – with it Vali will gain control of a mighty interstellar ship in orbit, and afterward secure his rule of the planet – a plan counter to what Old-Modir intends.

Without resources or allies, Persephone seeks help from the Adamu – the children of man. With the aid of Osiris and her Watcher SAMIRI, she galvanizes the former slaves to help stop Vali and Old-Modir. At the same time, she struggles with her apocalyptic nature, which risks everyone around her.

A wild chase ensues across the planet. All the while Persephone is becoming the leader she never wanted to be. All she wants is to be left alone with Osiris. She will have her wish, only as fate would have it – you know the story…the heart wrenching tale of Osiris and Isis.

Before the final battle cry, our characters will plunge into an abyss of turmoil and despair. The villains are dispatched, but the choking reality of things demand one solution – humanity’s end. Persephone outsmarts destiny, and saves a small population before unleashing her devastation. In the spirit of Horus, Moses, and Superman, Persephone secures her heir to wake 3,000 years in the future – the time when Atlantis will reign supreme.