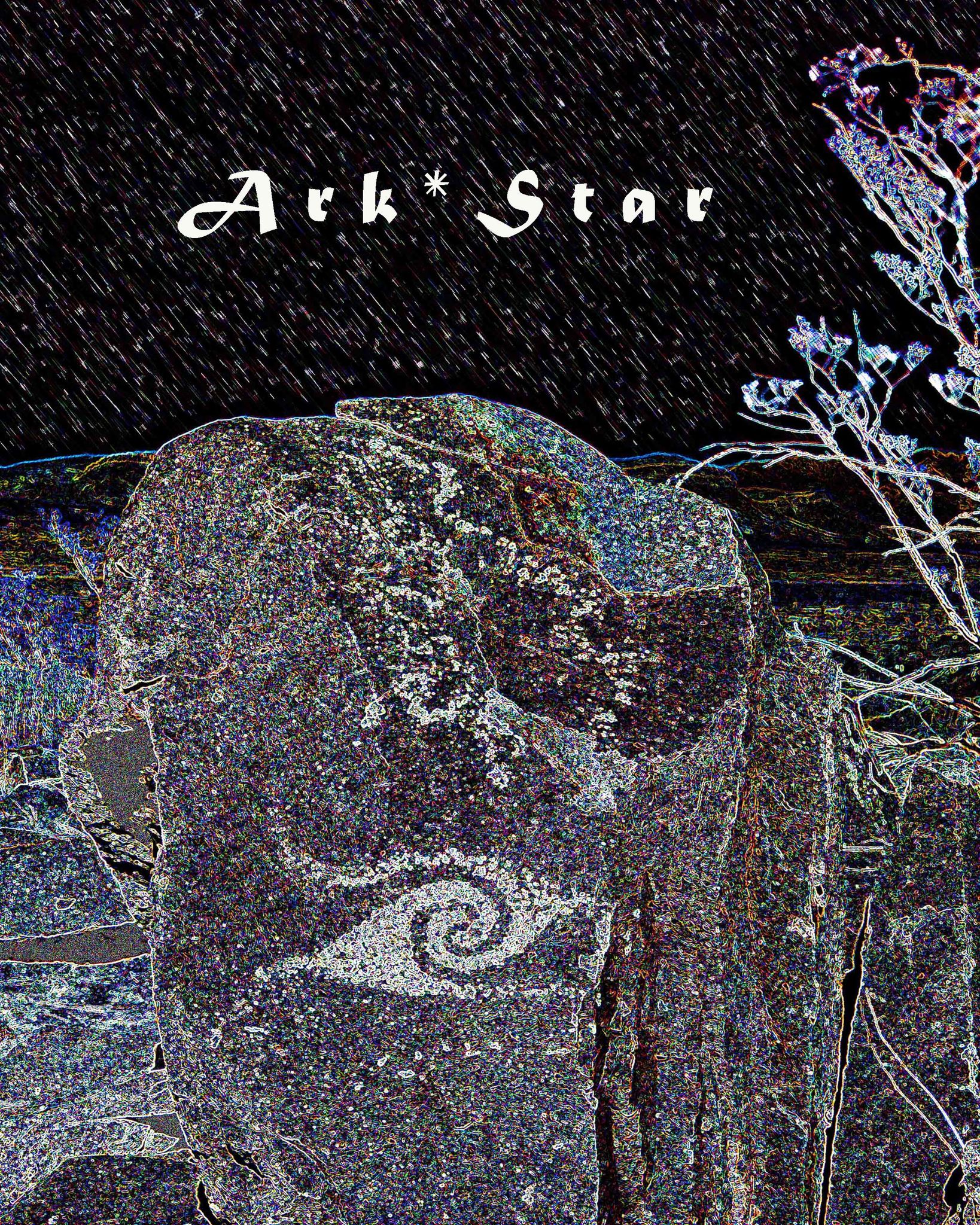 In the intergalactic spaceship Ark*Star, Geli and Rony escape a doomed Earth to discover an impending Big Bang will create the next Omnipresent Universe.

In the year 10,032 A.D., the mega-colossal star, Blood Thirsty Widow, draws closer to Planet Earth, causing a firestorm that explodes the forests into massive fireballs.

The captain, Geli, (20s, athletically toned, runs down the mountain with Rony, (30s), and dog Daphney.

In a flash, the three hustle as fast as they can toward the metallic pulsing spaceship, ARKSTAR, run by the female interactive holograph, ArkStar. Geli, Rony, and Daphney leap into the starboard portal. They eye the monitor to see Blood Thirsty Widow rapidly approaching Mother Earth, ready to devour everything.

ArkStar rises through the firestorm and catapults through Earth's burning atmosphere. As the spacecraft rises higher into the flames, ash, and vaporizing atmosphere, Blood Thirsty Widow incinerates planet Earth below the spaceship’s hull.

With Geli and Rony’s chosen mates, Nanalla and Berry, Earth’s starships escape in a wormhole, but it instantly collapses just before ArkStar enters. This strands Geli, Rony, and Daphney on the wrong side of the Milky Way Galaxy.

Then a massive hydrogen cloud appears throughout the universe. The gas quickly passes around the starship and heads toward the center of the Universe. ArkStar informs Geli and Rony that in a flash, the element will detonate and create the Next World!

For the survival of the Earthlings and its life forms, the holograph develops a “speed of thought” helmet, which will propel the ship in an instant. On Paradise Planet, Nanalla and Berry go to Tsunami Hemisphere where a gigantic wave delivers the ArkStar type starship, Odyssey. Its pilot is the holograph, Homer.

The infusion of hydrogen detonates into the Second Big Bang instantly creating a new universe. Geli, Rony, and Daphney must enter Absolute Zero Sleep, which will preserve them indefinitely for the next habitable solar system.

5 BILLION YEARS LATER! ArkStar awakens the earthlings because the starship has runs out of Earthonium, the anti-matter fuel to propel them through space. In a Ternary Star System, ArkStar aimlessly drift toward the Dinohoid home, Magenta Planet, where a vicious dinosaur/human race, the Razor Teeth, await their next meal.

The half-human/half carnivore reptilian, Supreme Slasher, gives the order to Commodore Razor Tooth-ils to capture the humans with the goal to breed a new food source.

On the other side of the Ternary Star System, the Platy Pussions Empire exists. Platypus Eyes (Geli’s 2nd Big Bang double), leads the fighting fleet, which becomes the vanguard to defeat the Razor Teeth’s space fleet. Being far more advanced, the human/platypus creatures make every attempt not to kill life forms.

In the cargo bay of the Razor Tooth ship, Commodore Razor Tooth-ils commands to torch open ArkStar. Upon realizing that the ship will be breached, Daphney dons the Speed of Thought helmet, melts through the hull of the Magenta Command Ship, and slips through the ternary star system to the Cyan side of space.

On the friendly side of the ternary stars, ArkStar and her crew meet up with the Platy Pussions and become befriended by Platypus Eyes. With Nanalla and Berry, Odyssey hopelessly drifts into Magenta Space, and Commodore Razor Tooth-ils now detects a new food source and commands to seize the starship.

In the Humanoid laboratory, Dino-med Tech, Nanalla, and Berry over-power Razor Tooth-ils and with the Humanoid Pigmies flee into the Mountain of Eternal Dementia, where its curse will entrap them for 10,000 years. Rony returns with the anecdote and saves Geli just in time to keep her from morphing into a Dionhoid.

With no hope of finding Nanalla and Berry, Geli, Rony, and Daphney return to interstellar space in ArkStar. In a distant solar system, they discover the Garden of Eden Planet where they start a family and fulfill their main mission to reawaken the Earth life forms on Ark*Star, reigniting a new Earth civilization.