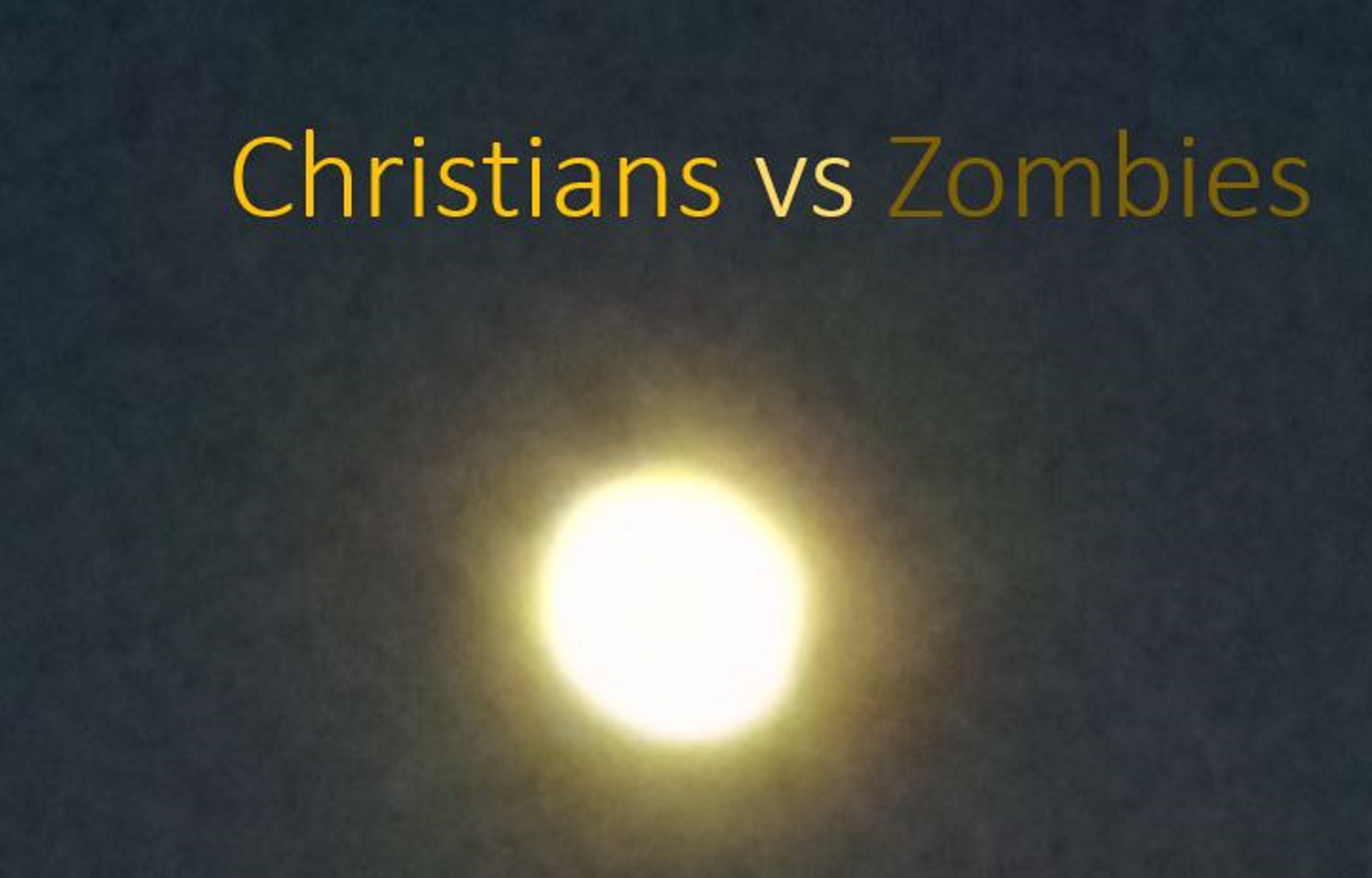 CHRISTIANS VS ZOMBIES
By Robert Sacchi

A young, unplugged, Christian couple begin a routine day unaware zombies are on the march.

It is predawn. Matthew drives to work and listens to a sermon on a CD. The sermon is about not stealing. There is no traffic on the road. Some figures step onto a roadway he just passed. Matthew drives at the posted speed limit. A car on the opposite side of the divided highway speeds by.

In a ditch adjacent to the roadway, and out of sight for Matthew, is a crashed car. The smashed car’s radio is on. A voice on the radio mentions roving bands of attackers.

Matthew arrives at his office building. He enters the building and the entrance door locks just before a zombie reaches it. Matthew goes to his cubicle, which is on the 13th floor, and readies for his workday.

It’s 7:13 AM and Rachael is reading her Bible in a televisionless living room. Rustling outside attracts her attention.

Rachael goes outside and sees armed people running. A woman, armed to the teeth, tells her zombies are coming. The woman gives Rachael a rifle and some ammunition. Rachael joins the firing line her neighbors are forming.

Matthew is working at his desk. Outside an out-of-control vehicle crashed through an office window. Some zombies make their way through the broken window.

Rachael is on the firing line when some zombies come. Rachael kills a zombie. A mother gives her young daughter instructions zombie killing. A woman sees her ex-husband and his girlfriend are zombies. She takes satisfaction in killing them.

Matthew is eating lunch at his desk.

Many zombies are in the lobby. Zombies get into the stairwell and climb the steps.

Many zombies are approaching the firing line. Rachael sing “Glorious Things to Thee Are Spoken” and the others on the line join in. The woman in charge gives the order to fire. She gives orders for 3 volleys then tells the line to fire at will. The ground is soon filled with empty shell casings.

Inside a tactical vehicle and officer tells the soldiers their primary purpose is to secure infrastructure and records. The vehicle stops and the soldiers rush out.

Zombies have reached the 12th floor.

Matthew is finished with his assigned work. He proceeds to clean his cubicle.

The soldiers have secured the lobby and 2nd floor.

The zombies reach the 13th floor. Matthew, his workday finished, exits his cubicle.

The elevator door opens in the lobby and Matthew steps out. Soldiers point their rifles at Matthew then realize he’s alive.

That evening at dinner Matthew asks Rachael how her day went.

And... That's set up. What's their response? The conflict?

Thank you. You mean something like: "An unplugged Christian couple's day during a zombie invasion"?