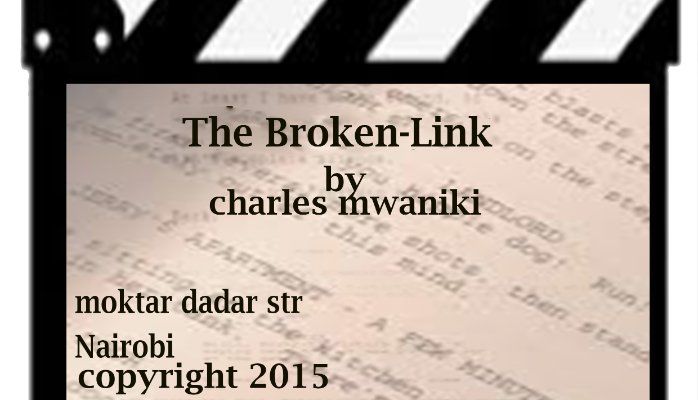 THE BROKEN LINK: GAIN THE WORLD LOSE YOUR SOUL
By Charles Mathews

In a present day African 2052 saga hard to tell a humanoid from a human, a direly hunted life of an abandoned teen girl makes her seek to know why, and why her abandoning is the answer to her drowning nation blindly collaborating with humanoids. A bitter-sweet discovery she is to come into terms with.

An open space glare a grove of towering trees. Parallel rails cut across stuffy grass hoisting remnants of metallic structures. A SOLEMN FLUTE manipulate the cold with tension. An purposed male struggles into sight, uncertain of unknown forces. He halts before the rails, then frantically jerks his phone out.The screen reveal a motionless man lying by a hostile river. Subtle compassion concur. He thrusts it back, cold randomly exercising his teeth. His right hand suspiciously reach out to his pocket for a TOP­UP CREDIT card. A reputable glance at it declares a perception beyond its worth. He gasps it tight in his crossed hands. This hooded figure is CEEGI. His daunting eyes subconsciously meet the flute tuner; an impoverished urchin seated by a crumpled container, perhaps pleading to the barren space for his daily bread. His name is DECO . In pursuit of nagging obligation, CEEGI impatiently turns, crossing the first set of rail. He attempts the second before a train interrupts. He awaits. A second train pop his nose oppositely at distance on the first rail behind him. He heeds to cross. The FLUTE TUNE fluctuates depressively. The fore train open sight to two aggressively sturdy men. Their eyes motionlessly in unutterable way. He ghastly stumble. The two guys violently charge after him. A third party alights from a vehicle at a distance. The shoes reveal of a feminine character. The DYING TUNE usher the rumpling train. CEEGI horribly jump across the back rail. The train’s HOOTING die deaf at his ears. The fore assailant’s incredible jump lands his arm on CEEGI’s jacket scratching it loose. His doubtful power destruct CEEGI subway in space thrusting him off balance. The train obliviously roll. CEEGI helplessly land on a steep across the rail to a reckless halt. The assailants impassively wait for the train to exit. The FLUTE TUNE die down to Deco’s horror.

CEEGI’s phone and TOP­UP CREDIT card land randomly after him. The card nearer to DECO. Blood confront CEEGI’s open wounds. DECO gratefully crawl for the TOPUP CREDIT card. The train’s ruthless exit attracts the assailants. DECO now reaches out for the phone. The two build men obliviously approach CEEGI lying motionlessly. A third party impassively join (only shoes). A hit from the lady’s boot detach DECO’s consciousness in an incredible power against the container. She purposely squats beside CEEGI’s phone then Picks it. She suspiciously stares at it, then reaches back on her feet. The lady apparently lead. The two male cruelly drag CEEGI away by is feet. An peculiar reception dispute their human perception.

Leafy trees convene along a hostile river. Four rescue team members weary at the weird weight of a lifeless male on their stretcher.

DECO subconsciously wake back to life. His hands struggle him to his feet, obliviously landing on the TOP­UP CREDIT. He hopelessly pockets it then confusingly stagger off, crouching painfully.

Busy students exhibit the prominence of this learning institute. An enthusiastic girl feeds her last number from a TOP­UP CREDIT card to her phone. A sense of familiarity of the card exhibit despite its lesser combination of characters, which spark doubt beyond normal perception. She enters a theatre hall with only one number to fill. We come to know her as CACHY. The hall deafens with silence as the ‘Wait please’ mode on CACHY’S phone compromise the rest of the phones. To the occupant’s horror, all phones simultaneously open to a familiar lifeless man on a medical lab. His name is MARON. The theatre screen too flickers to the same scene. Mystery outwits reality. The screen defies the occupant’s endless efforts to turn it off.

A busy technician defines the essence of a well refined medical lab. A motionless body lying at a back table beckon it’s familiarity. A computer beside him juts into activity displaying numerous operations. He unconsciously attends to his microscope. The computers actively execute sinister files. The once closed male’s eyes(Maron) spring open. Doubt accompany the depthless blue eyes. They frantically close back then open again to normality. The once lifeless male alarmingly spring to his feet, naked. He pays no apparent concern to the technician’s horror. A medical coat hanging on the wall fall victim. He compulsively exits.

“Seems CEEGI was into no good!”. On the second screen a humanoid head is transformed to an exact replica of the first selected photo as it rotates. A door CLANG from nearby compartments. The technician’s ghastly creep towards an open chamber where a similar humanoid to that of the screen photo impassively emerge. Three more chamber’s open to more replicas.

At the theater hall, students barely notice the medical lab scene exiting to their normal movie except CACHY. Tension challenge her conscious. Midway, the theatre left door bangs open. Horrible SHOUTS die at the automatic switch on of lights. An aggressively well build male stand at the door. His eyes compulsively scan without a blink.

Two more familiar male aggressively halt at the hall from the opposite door. The occupants freeze in horror to the familiar faces.

“ You never said you had a twin brother!”

” Save yourself!”. She halts in contemplation of fear. “ You are mocking death, run!” The occupants scarily struggle there way out. CACHY compulsively exits. The lights hopelessly glimmer.

THE BROKEN LINK: GAIN THE WORLD LOSE YOUR SOUL

Two more familiar male aggressively halt at the hall from the opposite door. The occupants freeze in horror to the familiar faces.

“ You never said you had a twin brother!”

” Save yourself!”. She halts in contemplation of fear. “ You are mocking death, run!” The occupants scarily struggle there way out. CACHY compulsively exits. The lights hopelessly glimmer.