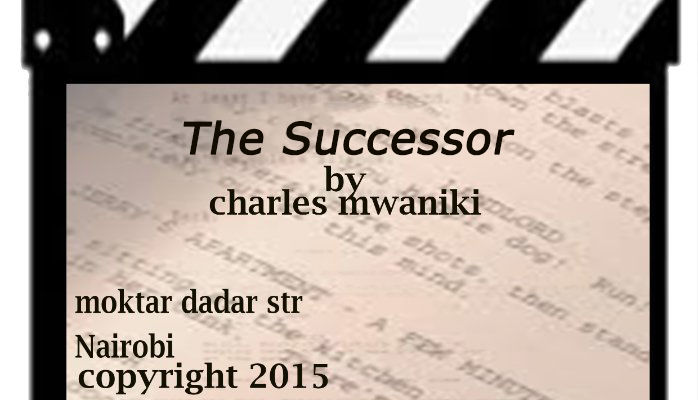 THE SUCCESSOR: YOU HESITATE YOU DIE
By Charles Mathews

A teen boy accidentally comes into contact with his ignored school code project he innocently created and now the terrorists are violently using to tear his foreign country down, he must find out how and why he's the only standing member of his family.

‘Remedy of Hesitation’, the title of a novel suffering in feminine fingers against her torso. Its ex-owner; a moderately tall svelte foreigner,her complexion confirms. We come to know her as SHOWER. Her scarf sway to the waves of the BUSTLING airport. Curiosity dare her persistence. She suspiciously let her luggage loose for a peep on her watch. 7:15pm it is, thanks to the electric accomplishment of this Waiting Room. A plaque at the furthest end reaffirms.

“Thought death would come to me in similar face, not in this drug bastard's face”,

A medium sized lady, utterly in a beautiful way, compulsively enter the Waiting Room. Her name is SEALINE. he purposely lead two build masculine through the crowd. There presence exert a subtle power. They instantly engage in a steadfast search, tactfully splitting ways. A vote of SHOWER’S reputation draw SEALINE towards her. She affirmatively draws her coat one side revealing a military badge.

SHOWER casts a suspicious eye at the two male whom kindly embark on her luggages.

“Get the steroids , they’re are worth, but her void is what you get paid for!”

A mild SOUND of distant approaching vehicle precede. A moderate light explore the emergence of a tough spotted Ranger-Rover. Its lights obliviously illuminate a strategically positioned figure. He aggressively cocks his gun. His presence prove malicious. A smooth ROVE of the Range fill the air. The assassin aim the gun ready towards SHOWER’S position.

“And I better not miss the hook of the news!”

An anomalous shot to that of the first assassin simultaneously hit the Rover's front tyre. It swerves to a screeching halt. From the windscreen, the driver swing lifelessly at the first assassin’s shot. SEALINE and one guard struggle SHOWER out . They retaliate. Horror compromise the tunnel. SEALINE highly safeguard SHOWER.

‘Fucking dread, how many of us where we!”

“You doubt my decision, soldi

“This time is a book. No names, only answers!”

“Rising treason within the camp in recent missions!”

WARLING curiously gaze at the picture.

CLUB MUSIC encore from a messed up room. Soft light glare bottles of beer beside a well build busy male on his computer. The screen glow busy with phone numbers and codes

Anonymous bullet thrust the male down dead. ‘Athman Cross’ display on the screen

THE SUCCESSOR: YOU HESITATE YOU DIE

“You can only save a life by saving yourself”

“Not even birth stands between my mother’s invention and me accomplishing it!”

Barrenness harass a vast land; home to huge extensive warehouses.Stacked containers cover the view providing aisles between them.  From the  furthest warehouse, a BOSSY VOICE intrigue the ears.  The air condemn an aggressively teenage boy bossing around two prominent male, a teenage boy and a blonde foreign lady. There stance invoke an exclusive power. Three more guys lie motionlessly on the floor. Blood daring them. Their reputation advocate for them as guards.  Five rough armed men take charge.  The restrained teenage boy is ruthlessly grabbed away .

“You direly need this book?”

“Death isn’t the only thing I can threaten you with, that includes your families!”

Two guards  impassively offer Memory Sticks to the three. They glare at them suspiciously.

“It’s true someone great is digging out your graves …,and I am afraid it’s not one, nor ordinary!”