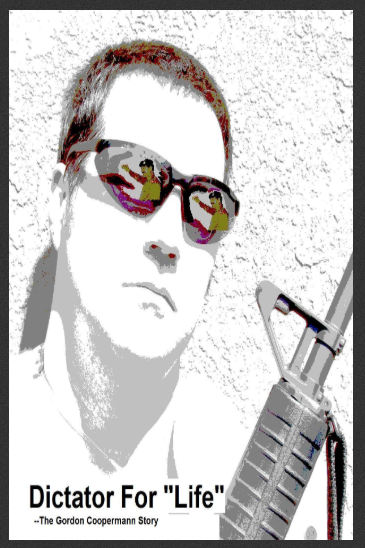 An Iraq war veteran, bucking for a promotion to police detective and trying to woo his girlfriend, is haunted by the ghost of Saddam Hussein five years after helping in Saddam's capture.

Iraq War hero Sergeant Gordon Coopermann helped capture Saddam Hussein. However, the glory is a long time coming after Saddam places a curse on Gordon during the capture from Saddam's spider hole.

Gordon leaves the military. Still jinxed five years later, Gordon is now working for the Denver Police Department. His luck is worn thin; but his last bit of luck, his long-time fiancée, Vanessa, has stuck with him through thick and thin. Vanessa is a recent graduate of law school and is leaving her job as an assistant professor to go to work for Adam Gregory of Adam Gregory Conglomerate (AGC). Adam Gregory is a wealthy oil and gas businessman who is losing his wife to cancer and has hired Vanessa to run a charity to memorialize his wife.

Wesley Gregory, Adam's younger brother manages to get himself entangled with an undesirable element of small time thuggery. Wesley's crew murders a cleaning lady during a home burglary. Of course Adam tries to help Wesley. Vanessa accidentally overhears Wesley's murder confession to Adam while working with Adam. Wesley decides that he must get rid of Vanessa. Meanwhile, Gordon is trying to make detective in the police department and inherits a City Councilwoman's missing dog case.

The ghost of Saddam appears to Gordon on the 5th anniversary of Saddam's capture and volunteers to assist Gordon as atonement for his having placed a curse on Gordon. Vanessa comes home to Gordon and Saddam discussing the case, although she cannot see or hear Saddam. Vanessa runs to her parents when she insists that Gordon seek counseling for Post Traumatic Stress Disorder (PTSD), but Gordon defies her orders.

Saddam's ghost aids Gordon in solving the crime of the missing dog. The missing dog is wearing an expensive bracelet as a collar that was stolen during the burglary/murder. The bracelet is connected to one of Wesley's thugs. Gordon and Saddam track him down and end up following him as the thug aids Wesley in kidnapping Vanessa. Wesley takes Vanessa to an AGC warehouse to get rid of her in an oil drum.

Vanessa is finally convinced that the ghost of Saddam does exist as she sees Saddam after being Tasered by Wesley. She concludes that Gordon does not have PTSD. Gordon and Saddam foil the plot and rescue Vanessa. Saddam, having solved this crime and made amends for his curse on Gordon, moves on to his next reparation, serving his own eternity in his customized Hell where he is "Dictator For Life."