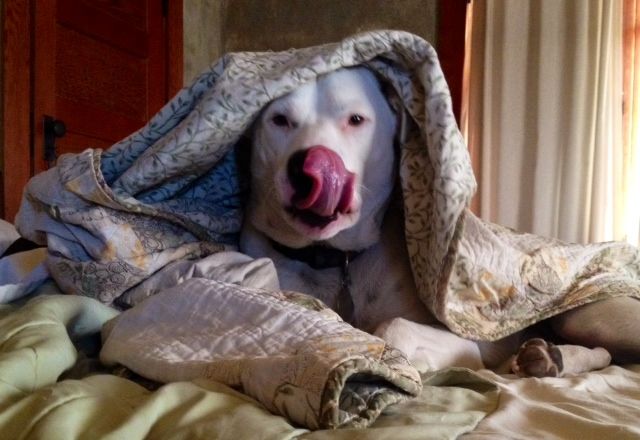 After pilfering the Warden's pedigree canine, the surreptitious inmates blackmail him into giving them  their own dogs - inflaming the ire of the States Correctional System.

A prison warden becomes an emotional hostage to the demands of incorrigible inmates who blackmail him into giving them custody of man’s best friend: dogs — for the penitentiary — inflaming the ire of the state’s correctional system.

Three-time loser Ramsey Lorde (“R. Lorde”) runs Stone Castle Correctional Facility with the usual — and unusual — suspects. His wanton, vainglorious wife has left him for the prison Chaplain, Lester (“the Molester”). She has also temporarily left him with her thrill-seeking, pedigree French bulldog, Butchie, whom he can’t stand. That’s now left him with a hypertensive crisis. After all, he’s been hiding from himself for years, which is incompatible with the standards of a penal province, and, which has left him to join “The Disowned Self” club. And now, his irascible inmates have left him with a dilemma: they’ve taken Butchie captive. The ransom: a baker’s dozen of dogs.

Desperate to get Butchie back, Ramsey reluctantly recruits a mixed bag of unwanted dogs from wacky animal rights crusader, Rochelle, her audacious son, Leopold, and her gal pal, Allea — a mute. The next morning, Ramsey’s parcel of providential pooches arrives to open arms and loving hearts of Stone Castle’s most hardened felons. As dogs and prisoners are paired, Butchie remains on Ramsey’s “Most Wanted” list, thanks to the innate finesse of inmates and their ability to hoodwink a gullible Ramsey, all the while ameliorating boredom. After all, this, too, is cemented in their DNA.

In the days and weeks that follow,Ramsey doggedly scours the prison from stem to stern in pursuit of Butchie’s whereabouts and her captors. Meanwhile,Rochelle’s once “under-dogs” help rehabilitate inmates by teaching them compassion, unconditional love, and the importance of living in the moment. Gradually, this irrigates Ramsey’s impoverished soul. More importantly, rage and anger fades within the prison community. All seems well, that is, until the debut of the unsanctioned Stone Castle’s “First Annual Dog Show.”

The Department of Corrections chieftain, germophobic Jonathan Coopersmith, makes an unannounced visit during the pet’s parade around the prison yard. He berates Ramsey, then orders him to send the prison’s passel of strays packing, and, ultimately, to a certain and unconscionable outcome — death. Rochelle and Allea are emotionally decimated. A dark cloud descends over the prison. Ramsey reluctantly agrees to supervise the return of the prison’s pack to the pound’s death row in the morning. In love with Rochelle but trapped by unworthiness, Ramsey is broken. He’s consumed with self-reproach. His attempts to foster have failed miserably.

On the other hand, inmate ringleader Blackjack has become emboldened. He’s been planning an escape for months, taking advantage of the digging prowess of his semi-blind dog, One-Eyed Jack, and a terrier aptly named Shovel. For them, it’s now or never. Together with fellow prisoners Half-N-Half, Letterhead, Potty, Alan, and their beloved four-legged friends, this merry band of brothers journey deep into the caliginous, makeshift mineshaft leading to liberty. Just as they reach the other side, the tunnel collapses on them — with cataclysmic consequences.

The convicts are placed in the Administrative Segregation’s “hole” while Ramsey confronts an anxiety-provoking dilemma. He’s finally reached that pivotal moment in life — one that will forever define him. Either he makes a stand for Rochelle, for the dogs, and for the profound effect they’ve had on the penal colony — and, most especially, himself —or, he risks losing everything. And, if Ramsey’s lucky, he’ll be reassigned to a local kindergarten —as a crossing guard.

In the endeavor to help win back an emotionally devastated Rochelle, save the dogs, and quite possibly, his job, Ramsey concocts a desperate scheme. With the help of Rochelle, Allea, and technology whiz Letterhead, they break in and enter the pound after hours and liberate the demoralized dogs from their kennels of doom. During the commotion, they encounter Itzi Bitzi, the deranged, 300-pound Animal Control commandant. She’s conned into believing the mission of Ramsey’s Rescue Team; that his authority compels her to release the dogs into his custody. Their victory, however, is short-lived.

In the morning, Itzi learns she’s been duped. She corrals a crack team of animal control officers, state troopers, and the overzealous, sanitary Coopersmith. Collectively, they descend upon the prison with cages, nets, ropes, and snares. Their mission: Remove the dogs, restore order, and impeach Ramsey for high crimes, treason, and uncleanliness.

With his back against the wall, Ramsey quickly dials up a “Hail Mary” play to save the day —for his dogs, his inmates, and his world. Ramsey becomes a bona fide hostage, and as such, directs the inmates to make his surreptitious demands to the media. News crews rush to the scene for first-hand coverage on the chaos, which shows dogs being cornered, rounded up, captured, and caged. Pleas ring out for community support. Crowds enthusiastically respond and line the perimeter chain link fences —rooting for the dogs and inmates.

As the insurrection intensifies, Itzi and her team fire tear gas to subdue both dogs and inmates. Tensions rise. The media’s broadcast reaches the attention of Governor Arnold Schwarzsnauzer (who resembles the “Governator”). Meanwhile, Leopold inserts a news media lavaliere microphone into Coopersmith’s SUV. His salacious remarks are transmitted to every media outlet, including Schwarzsnauzer’s Blackhawk helicopter, which arrives at the height of the rebellion.

After surveying the scene, Schwarzsnauzer is furious with Coopersmith’s insolence towards those who have “no voice and no choice.” The Governator terminates him, promotes Ramsey Lorde, “Citizen Canine,” to fill the vacancy, and encourages everyone to get in touch with his or her own “inner dog.”