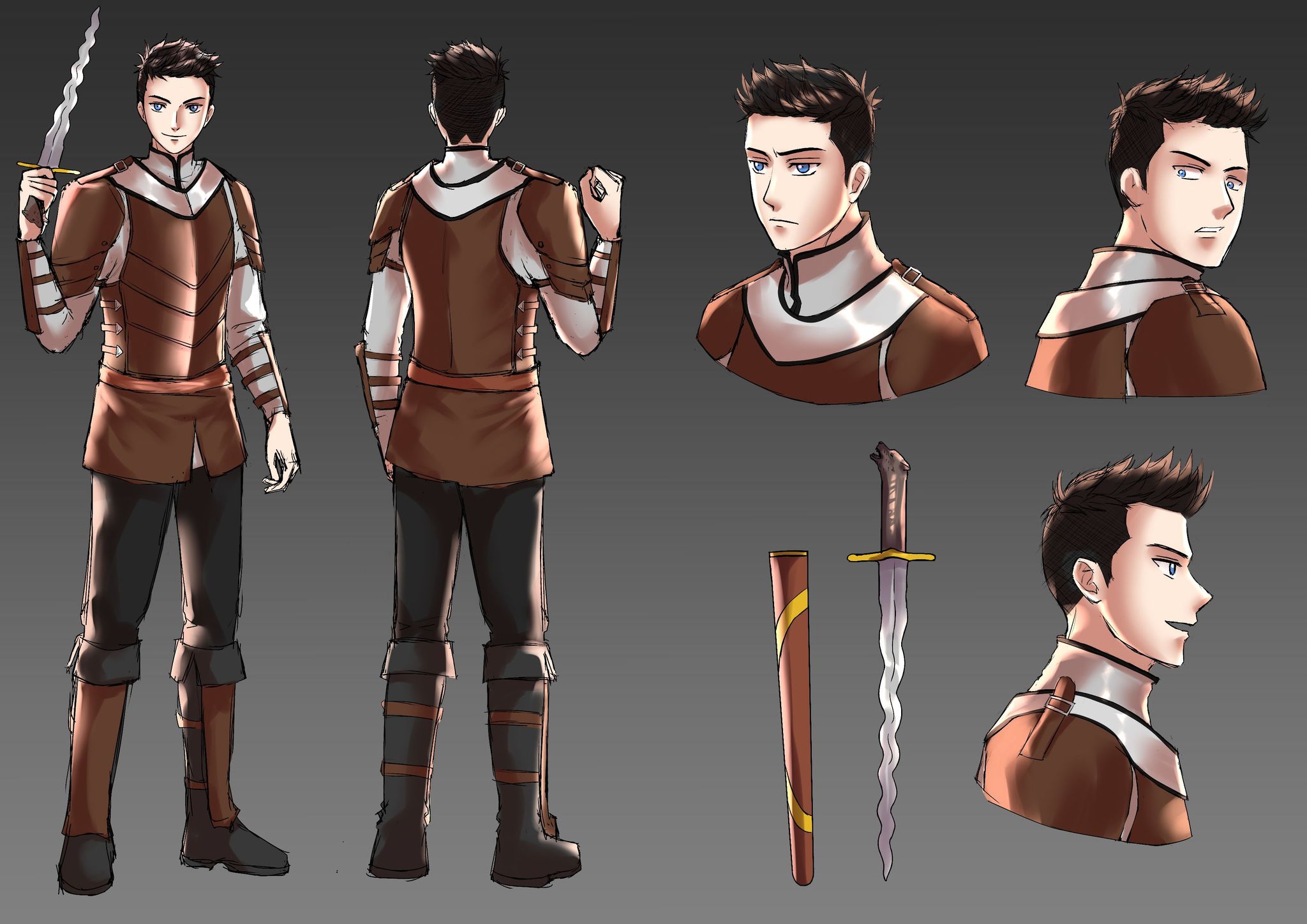 After his father ignores the rise of monsters in his country, a prince takes matters into his own hands by abandoning his royal duties to train under a legendary monster hunter.

Roderick Wolfsgar, is the sixteen year old heir to the throne of Caurith. Three years before the start of the show, Roderick fled his home land to the neighboring country of Tabeth, with hopes of training to become a monster hunter. As a young boy, Roderick witnessed a horrendous orc attack on one of the towns in Caurith which claimed the life of his mother. Roderick tried to convince his father to go after the rising monster population but the stubborn king refused. Taking the words of his father’s advisor to heart, Roderick runs away and trains under legendary monster slayer, Dasterian a half angelic, half demonic entity. Dasterian is highly experienced and very wise, but often gets frustrated with Roderick’s careless antics, but also acts as a type of father figure for his apprentice. It is apparent early on that he does care for the boy and tries to teach him about life and not just about slaying monsters. We are first introduced to Smithers, Dasterian’s half elf half dwarf assistance who is extremely loyal to Dasterian and by proxy Roderick and also serves as another type of fatherly figure to Roderick.

When the pilot begins, Smithers is collecting money from village patrons outside of a cave. After an exchange between the Village Leader and Dasterian, a large monster bursts out of the cave only followed by a werewolf. Dasterian scolds the werewolf, now revealed to be Roderick, for not taking the battle too seriously. Roderick quickly slays the creature and then reverts back to his human form and is scolded again by Dasterian for his leisurely attitude. Roderick is known as a lycan, someone with the werewolf curse who can transform at will and retain control of his mind and body while doing it. Throughout the series this will be revealed as a hereditary trait possessed by the Wolfsgar family.

Once back at Dasterian’s manor, Roderick falls asleep in the tub and begins to dream back to the day his mother was killed before being interrupted by Dasterian. As Roderick washes away one monster attack, we view the small town of Millstone getting plagued by another. The townsfolk hide in fear as a creature rips apart their town, hoping that a rider they had sent earlier in the day made his way to Dasterian. During diner, the rider arrives safely at Dasterian’s manor to request him for a job in exterminating a strange winged creature that has been attacking the town of Millstone every night. Though the rider did not have enough coin to hire Dasterian personally, Dasterian hands the job off to Roderick, certain that he can handle it. The rider takes them to the town almost immediately, arriving as the sun begins to rise. Once they arrive, Roderick is directed to the village market by the town’s leader, Chief Anzo. Roderick explores the village and asks the citizens what they recall about the creature. While doing this, he eyes a young woman being harassed by three bandits. Roderick dispatches the bandits in front of all the villagers, chasing them out of the village.

Shortly after, Roderick meets the village’s blacksmith, Grath, a pacifistic man who happens to be the young woman’s father. He reveals that his daughter had spoken of a strange noise near a cave outside of town and asks his daughter to direct Roderick there.

The young woman introduces herself as Anna (a shy girl but often friendly) and leads Roderick to the cave. Roderick instructs Anna to go back to the village and inform his mentor about his location, giving her a dagger from his waist belt as a means to protect herself from future harassments. He enters the cave where he begins battle with a large gargoyle by the name of Coldstone. Eventually realizing that Coldstone is merely wounded and not the creature attacking the village, Roderick has a change of heart and heals his wounds with blood magic. As a show of gratitude, Coldstone reveals that the creatures attacking the village are indeed gargoyles from his former tribe after leadership was taken from him. After an exchange of words, Roderick returns to the village and prepares for the creature that is surely to appear that night.

Coldstone is cold and calculating and will serve as a type of bodyguard for Roderick with the two eventually becoming close friends. While this is only the premise of the pilot episode, I have the next few episodes planned out which show Roderick and Coldstone battling the invading gargoyle and later team up with Dasterian and Smithers to defend the village against the whole tribe. Season 1 is planned to develop Roderick’s relationships with new characters like Coldstone and Anna who is intended to be a love interest for Roderick. It will also go into his established relationships with Dasterian and Smithers, and follow Roderick’s growth as a monster slayer as he battles all types of creatures. During this season Roderick will also grow to become more of an adult and a well-tuned leader as the potential future seasons are planned with him taking on more responsibility and steering away from being an apprentice.