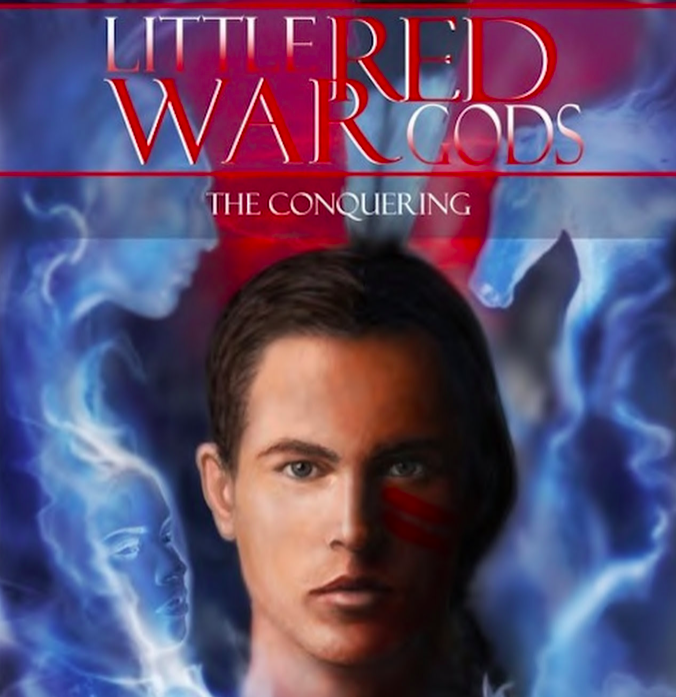 Middle America twins are thrust into the unlikely role of Navajo Indian Gods after a fallen angel tries to convert everyone in the world to Christianity.

Little Red War Gods is all about action

And then there’s the theme

One night, after dinner, his wife shared a Navajo legend with us.

“The Little Red War Gods,” she said, “were the twin sons of Navajo Holy Father and White Shell Woman, who killed all the monsters afflicting the Navajo.” She hesitated. “ It’s too bad they don’t return to kill the real monsters: the pastors, ministers, and priests tirelessly proselytizing on our lands.”

“I will bring the twins back,” I said, brimming with excitement. “Are you ready for a holy war?”

She laughed. “In truth, I wouldn't want the twins to return because they were too powerful. After they killed the monsters, even biting flies seemed worth killing. The slaughter was so gross the land was nearly stripped of life. Our people starved in mass, hanging onto the brink of extinction, until Navajo Holy Father gifted them the Animal Spirits with Blue Eyes, as their new protectors.”

The stakes just got higher, I thought. “What if a Christian angel stole away the Animal Spirits with Blue Eyes?” I asked.

“Navajo Holy Father would certainly bring back the war gods,” she said, thinking. “But why would the angel provoke a return of the war gods if most everyone and everything would be killed. You’d have to be crazy or desperate to want that.”

“True, but the angel would have a good plan. Once the twins returned, young and vulnerable, she’d convert them to Christianity and ally them to Christ. This alliance would be so powerful, Christ would drown the other gods and their faithful in a spiritual flood of conversion. When the holy waters receded, everyone would be Christian.”

“And this angel would be in Heaven on Earth?” She chuckled. “But Navajo Holy Father would never allow his sons to be tainted.”

“Agreed,” I said. “The war for the souls of the twins would take many twists and turns. They’d suffer the brunt of two brutal adversaries pulling them in radically different directions. Their relationship and their lives would be put to the ultimate test. How each of them would handle the revelation they were to become Navajo Gods, that might wipe out the world, would be the backbone of the movie, of the movement.”

“And how would it end,” she asked.

“There would be three possible outcomes: one, everyone would be Christian, two, everyone except the Navajo would be dead.”

“Christ would be repentant for his angel’s mistakes and would give all of his followers over to Navajo Holy Father, if Navajo Holy Father stopped the killing. And the Navajo Way would become the most prevalent way of spiritual life in the world.”

She cried. “I could never picture a world of peace. Now, when I picture my people’s way, having sway over the world, I realize peace is a picture I live in.”

I was blown away by her vision of the new world. She could see the future, and it was beautiful. “So I shouldn’t tell you that ending number two is the winner.”

Recently, I read an article by The Rev. Dr. Clair McPherson: The Passion of Joan: Religious Wars in the Movies. The good Dr. concludes with, “But perhaps we do hear God’s voice in Dreyer’s film. He used the art of film to deal honestly with the subject of religion and violence — a subject often exploited but almost never done justice. Dreyer accomplished that. I wish that every human being who has authoritative access to violence would watch Dreyer’s Joan of Arc. I think that might take us one small step in the direction of the real kingdom.”