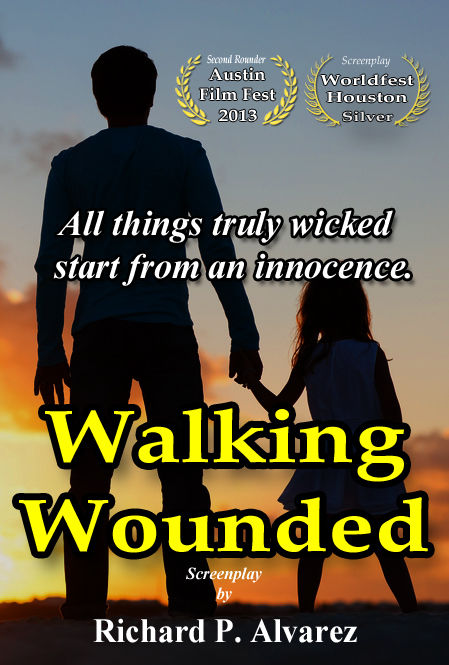 When a disabled vet picks up a young mother and daughter late one night, he opens the door to more than a pair of disturbed hitchhikers; he picks up their sordid past as well. No good deed goes unpunished as the dark secrets of the past catch up to the present in a perfect storm of clashing psyches on a cold Texas night.

"All things truly wicked, start from an innocence" - Hemingway [

Iraq War Vet Sam Boldwin leaves his rural house in West Texas late one night for the long drive to the Crossroads Market for liquor. When he arrives, he finds wayward young mother Krystal, and her daughter Mia, hungry, cold and looking for a ride. He picks up the pair, offering them a place to stay for the night. Turning down Krystal's offer to 'pay the rent'; Sam puts them on the couch for a good night's sleep.

In the morning, it becomes apparent that the young mother is on the run from an abusive relationship. Sam agrees to let her lay low and help around the house. Meanwhile he takes a shine to the young girl and decides to teach her to read.

When Krystal's addiction catches up to her she steals the truck to return to the crossroads, where she scores drugs from Terry the cashier. Strung out and raving on her return, she drags a drunken Sam into bed where she attempts to seduce him.

Sam wakes in the morning, shocked and horrified to discover both the mother and daughter in bed with him. Unable to remember the events of the night, he insists that they leave, offering to drive them three hours west to the border.

Krystal convinces Sam that all is well, and together they would make the perfect family unit. Inspired by the vision of a family he never had - Sam takes Mia to the local thrift store to pick up some clothes. But Valerie, the worker at the store who has a crush on Sam, suspects possible abuse after Mia provides unsuitable answers to her probing questions. She calls the Sheriff when they leave the shop.

While Sam and Mia are away on a long distance grocery run, Valerie pays a visit to Sam's house, intent on discussing her suspicions, and confronting her younger rival, Krystal. But Krystal only inflames Val's suspicions, and shocks her into running for help. Krystal must prevent Val from going to the police.

The Deputy shows up that night and against Sam's objections - takes Krystal and Mia into 'protective custody'. With Mia's help, Krystal tricks the Deputy into stopping on the road where she overpowers and murders him. They hike back to Sam's before dawn, where Krystal steals Sam's truck, hoping to make a run for the border.

Low on gas, she must halt at the crossroads where she offers 'trade' to Terry for a full tank of gas. But the clerk has other ideas, and takes young Mia to the back room.

When Sam awakes to find the truck gone, he uses the riding mower to head for the nearest phone at the Crossroads. Out on the road, he faces down Krystal in a bizarre game of high-speed chicken as she races for the border. Their collision unlocks the secret of Sam's mental disability.

The final confrontation in the lonely farmhouse takes on twisted turns of psychosis, torture and death, as everyone's dark past is revealed. Sam and Mia must forge a dark bond against Krystal to remain standing among the WALKING WOUNDED.