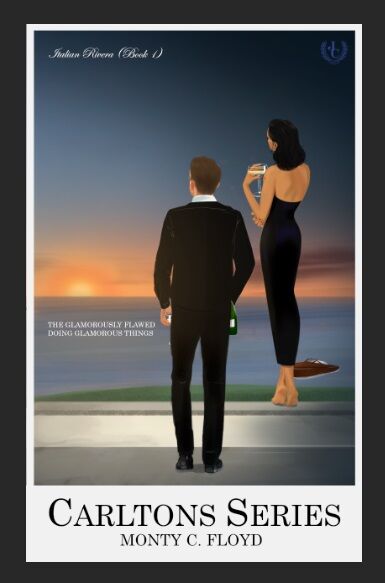 Friends say, “the couple, even when being driven crazy by them, leave one spellbind.”

The Carltons Series is a compilation of vignettes within a continuous serial that peeks behind the lives of a cosmopolitan adventure set. In search of excessiveness and debauchery, the Swans and Stags, ten flawed characters lead by Charlotte Carlton accompanied by her husband John, embrace life after the pandemic... the New Roaring Twenties.

* The series is created for entertainment, but also an advertising/marketing campaign.

Imagine a delicious concoction of Scott and Zelda/Liz and Dick embodying gin-soaked days and fun-filled nights. John and Charlotte are a carefree golden couple madly and lustfully in love, codependents drinking their way through continents, charming and challenging everyone they meet—especially each other. While John’s laid-back style and steadfastness offers stability in their nomadic life, Charlotte’s zest provides the action. Her talents and energy and intellect markets desire. She’s a rare creature to be marveled at, the center of attention with as many detractors as admirers. Although on stage life is glorious, backstage, however, the legendary couple struggle to keep it together, haunted by dark secrets and raucous fights, forever challenged by Charlotte’s relentless drive to uncover a family secret.

Among their circle is Tom Huston, an enigmatic masculine creature men want to be, and women want to bed. However, the reader never quite focuses upon him. He remains shadowy and indistinct, giving only a few hints about his background. His adventurous existence, though, pulls us down a rabbit hole into a world of thrill-seekers, spies and beauties, like Lee ‘Slim’ Kyung, a statuesque Korean art dealer with an abundance of confidence who may hold the answer to Charlotte’s riddle. Albeit, Charlotte’s possessiveness of Tom could might derail Slim’s initiation into the group.

The plot, latent with sexual undertones, excess, turmoil, scandal, and bottles and bottles of booze thickens as the series unfolds; struggle between forms of power develop; some transformations will be spectacular while other slightly less, but beneath the lustrous veneer of the monied at poolside play, lay personal tragedies and secrets when revealed will shatter the illusion and idealism of this radiant world.

Encapsulating the breezy allure of the Italian Rivera, the lustrous playground for the rich and glamourous, Portofino serves as an entrée to the sphere’s initial story that offers a promising beginning to an extraordinary taste of the series to come.

The present-day series possesses a '50s nostalgia, a passport to a vanished time, a peek at a coterie of timeless, international, complex creatures seeking refuge in a blissful world of fantasy sans selfies and social media.

The plots are ripped from past headlines providing an undercurrent of an international spy, noir drama with forays into sordid affairs while catching Ralph Lauren’s latest fall collection.

Be part of the journey--