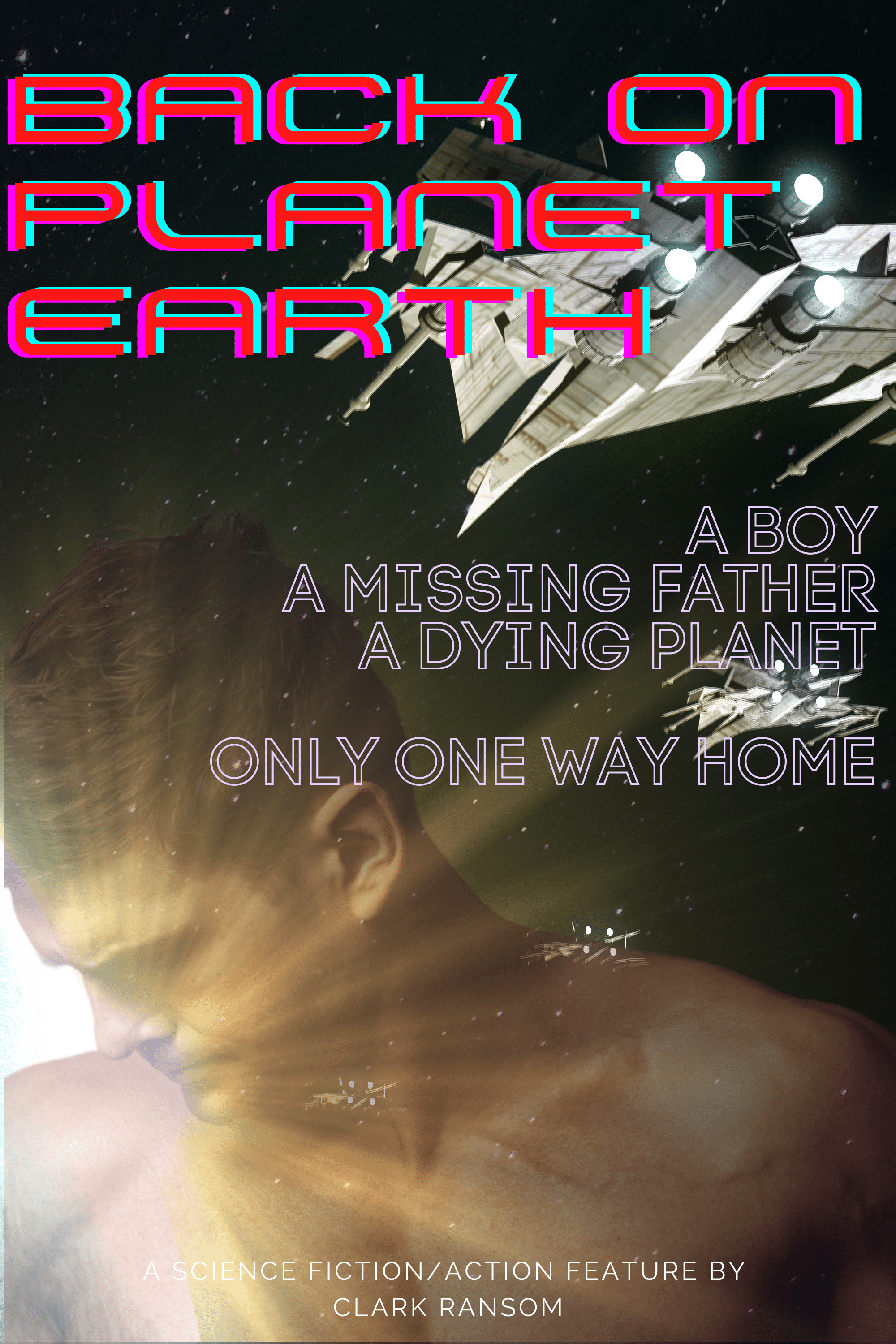 BACK ON PLANET EARTH
By Clark Ransom

Determined to rescue his spaceship-wrecked father, a rebellious teen from a future Earth fights for his life against two powerful men who, in exchange for his father’s life, demand the formula of his bacterial fuel technology, the knowledge of which will make them billions and save our planet from an impending climate-driven apocalypse.

The Earth is dying. The planet has less than ten years until the effects of Climate Change are catastrophically irreversible. Already, electrical grids are failing and rolling blackouts are commonplace across the country. No one knows how to save the planet, and the rich and powerful could care less.

Earth: 2112 - Enrolled in the Space Force Academy, young Brick Wilshire (19) is a rebel who breaks the rules, openly flaunts his insane piloting skills, and in turn, his arrogance and vanity attract few, if any friends.

Brick’s father, the ever-popular Vice President Dade Wilshire, while on return from a galactic environmental peace summit, his spaceship is swallowed by a wormhole anomaly and transported back to…

Earth today. In return for passing favorable legislation that allows fossil fuel drilling in protected areas of the planet, a Senatorial hypocrite, who proclaims to be an environmental advocate, is secretly accepting enormous bribes from the nation’s most powerful Oil Business Executive, Jack Ralston. Ralston will do anything to enrich his fortune, including the eventual death of our own planet.

Dade’s spaceship crash-lands in the Gulf of Mexico near one of the many oil rig platforms owned by Ralston’s company, Global Gas & Oil. Barely escaping death by drowning, Dade is captured and held captive by Ralston. The oil baron realizes the futuristic fuel from Dade’s ship will instantly increase humankind’s ability to power all transportation with zero harm to the planet, the control of which will make him the wealthiest, and most powerful man in the world.

Under intense interrogation, Dade refuses to reveal the technology behind the ship’s propulsion to either the Senator or Ralston, and now imprisoned, his fate seems dire.

Back on a “Future Earth”, the US Space Force command hesitates to react and save the Vice President, so Brick abandons all common sense, sets out to rescue his father, and recklessly plunges his own small ship through the same wormhole and travels to Earth of today.

Unbeknownst to Dade, Brick has survived his own wormhole journey, crashed on the Arctic Tundra, and is rescued by environmentalists. Recognizing that this young man is no ordinary boy, the rescuers alert their benefactor, the Senator, of their extraterrestrial find, and he is brought to Washington, DC.

In Washington, Brick meets Marisol (22), a scrappy, Latina millennial blogger with a reputation for exposing the un-exposable, and the two begin a sparring romance.

Knowing he can use his father’s location to manipulate Brick into revealing the fuel propulsion formula and careful to not reveal his true scheme, the Senator offers his help to “find” Brick’s father. In exchange, a naïve Brick agrees to replicate the bacterial fuel for the greater good of the planet.

Although skeptical at first, Marisol seductively coaxes the time-traveling truth from Brick, which only further inflames her attraction toward him. Through her journalistic sleuthing, Marisol warns Brick about the Senator and Ralston, but his singular need to find his father compels him to ignore what he knows to be true.

The Senator travels with Brick to a secret underground lab in the New Mexico Desert where the Senator and Ralston have set up their own Alien Research Lab. Upon arrival, Brick goes to work on replicating the bacterial fuel formula. Within the lower levels of the lab, the discovery of his father’s crashed spaceship jolts Brick into the reality of his situation and he turns to Marisol for help.

Marisol reveals the truth behind Ralston and the Senator’s illicit plans and the two young lovers concoct a plan to rescue Dade, unmask the duplicitous Senator, destroy Ralston and his oil-sucking plans, save the planet, and in turn, their very own existence.

But their attempt fails, and Ralston’s true and nefarious plot strikes down the Senator and corners Brick, Dade, and Marisol out in the open desert only moments after they escape the underground lab.

Reunited with his father and the planet saved from a Climactic end, Brick must make the heart-wrenching decision to return to a future Earth and leave Marisol behind. However, he puts her in charge of ensuring the fuel technology will be shared with the entire world, thus guaranteeing his own future existence. That information, the fuel formula, are all stored in a key-like device known as a PAS NAV, and Brick entrusts the device in her care.

A few years later, Marisol has managed to orchestrate the introduction of the bacterial fuel, and the world is filled with clean-running space vehicles known as PAS CARS; it’s the Jetsons come true. But her love for Brick reminds her of one of the last things he told her, “The PAS NAV is the key to finding the way back home.” A lightbulb moment, Marisol races to the site on the Arctic Tundra where Brick’s small spacecraft originally landed.

Upon arrival in the Arctic, the now snow and ice-encrusted spaceship instinctively responds to the PAS NAV that Marisol carries with her and reveals its hidden location. Marisol jumps inside the two-seater cockpit, inserts the PAS NAV, and a computer voice announces their end destination: home.

The ship lifts into the night sky and rockets up through the Aurora Borealis into deep space.

(This Sci-Fi/Actioneer features a young Male lead and a Latina lead that showcases today’s Environmental headlines and our increasingly blind reliance upon fossil-based energy sources that are destroying our world. The Oxford-based research and technology are grounded in actual science; the renewable E. coli based, bacterial fuel, Nostoc, is real and at the forefront of alternative technologies that will power our world for the near future.)

BACK ON PLANET EARTH