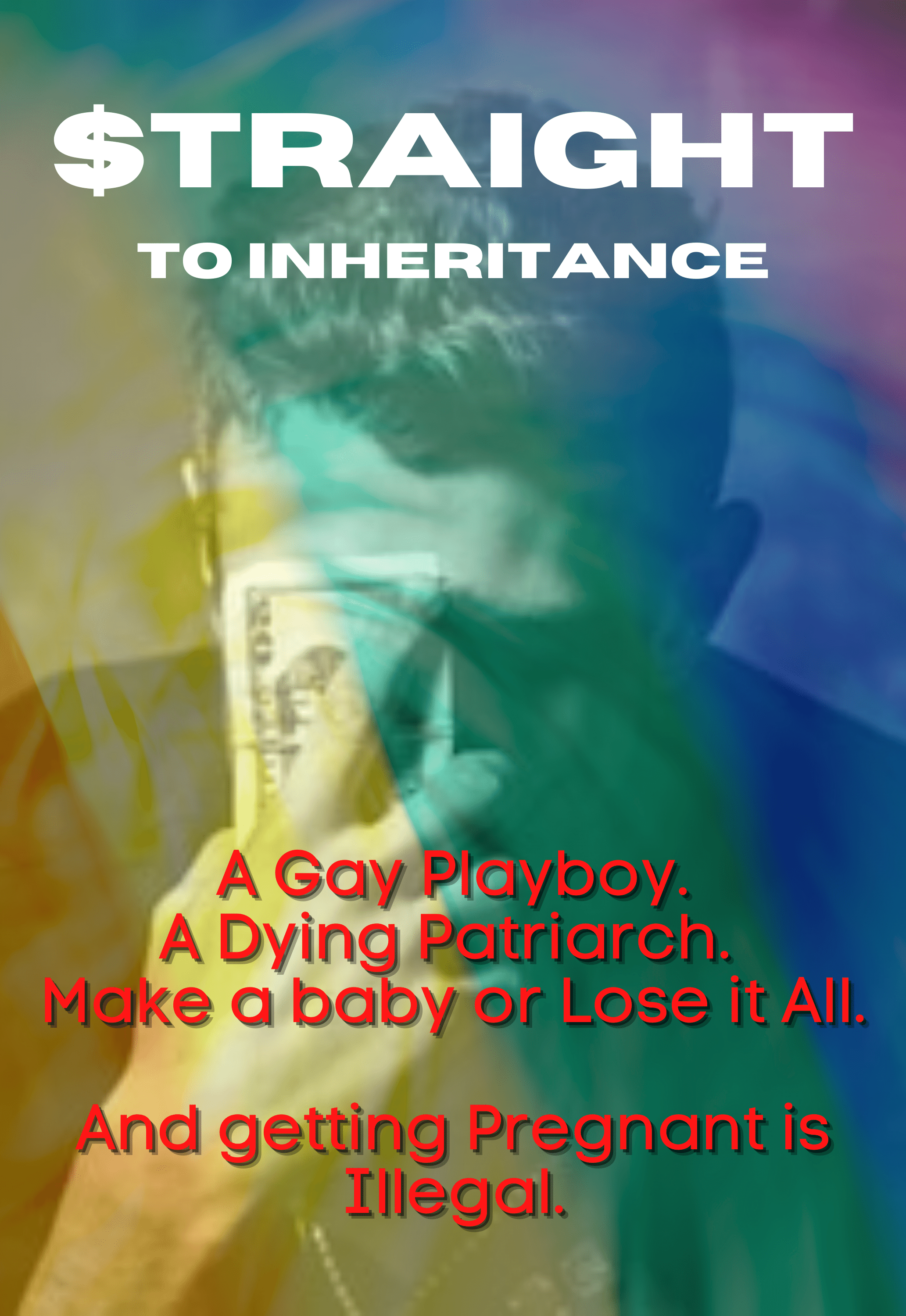 STRAIGHT TO INHERITANCE
By Clark Ransom

Many years ago, the Global Oversight Democracy (G.O.D.) was created to maintain control of human births and achieve a zero-population growth factor in an overpopulated world. The drinking water is treated with a genetically manufactured bacterium that temporarily sterilizes the male sperm: birth control from your kitchen tap.

Kyle Kincaid is a member of society’s Elites. Ever since his parent's “freezing-to-death” skiing accident, his billionaire grandfather, Arlo Kincaid, took him in and ensured the boy never went without.

The secret behind Arlo’s success with Kincaid Toys is the amazing life-like dolls called THE ALGERNONS. When younger, he and his then-partner, Max Grimes, discovered an algae that gives fabric the sensation of human skin and the warmth of a real person; the rest is toy making history. Years later and driven by greed, Max attempts to steal the Algernon formula, but in the process, he is exposed to the algae substance within the factory machinery, leaving him a mentally tortured man with blue skin. Arlo has him locked away in an asylum where Max has forever sworn revenge.

Today: Now a raucous, irresponsible, always-in-the-news, Casanova, Kyle is shattering many a man’s heart, both straight and gay.

Arlo is diagnosed with an inoperable disease, and with less than two months to live, he demands that Kyle produce evidence of a true male heir within thirty days, or he forfeits his billion-dollar inheritance and will end up in Salvation Village, or worse, the bowels of Inferius.

Mori Dumont grew up with the Kincaid family and faithfully works in their household. With a hidden love for Kyle, she hopes he will grow out of this “boy attraction” and realize she is the one for him. Kyle is ill-prepared in the child-making department, and the very thought of “coupling” with a woman is terrifying!

Without Arlo’s knowledge, Mori concocts a scheme to find an illegal surrogate, fulfill Arlo’s fortune requirement, and allow Kyle to remain his good-old gay self. Unbeknownst to Kyle, Mori volunteers in the subterranean tunnels of Inferius, supplying stolen medicines to help save the sick children.

When Max learns of the heir-producing plan, he manipulates one of the asylum orderlies, Stefan, by promising him access to ever-popular Kyle. Struggling with his own sexual identity, Stefan sees Kyle as a way out of the poverty of Inferius. In return, he agrees to help Max escape and introduce Max’s daughter, Priscilla, as a possible surrogate. If Priscilla can birth the heir to the Kincaid billions, Max will finally have control of the organization and get his revenge on Arlo.

With Stefan’s help, Priscilla works her way into Kyle’s playboy life and persuades him she is the perfect surrogate. In the process, Stefan and Kyle begin to fall in love. But it all seems too easy, and a combination of jealousy and suspicion propel Mori on a secret fact-finding mission about Priscilla’s past. In doing so, she not only uncovers “who” Priscilla is, but that she is also the granddaughter of the vengeful Max. Yet, Arlo grows closer to death each day, so Kyle abandons caution and arrives at the in-vitro clinic ready to hand over his sperm to Priscilla.

At the clinic, with Priscilla only moments away from being impregnated, Mori bursts in to reveal Priscilla’s true identity, and her relationship to Max. Mori and Priscilla battle for possession of the sperm, and in the melee, they destroy all the other in-vitro sperm supply tanks. While Priscilla escapes the clinic with Kyle’s sperm sample intact, Kyle and Mori are hunted by the G.O.D. and, overnight, they become wanted criminals.

Back in hiding with Max, Priscilla discovers that Kyle’s sperm container has been cracked and the contents useless. Kyle and Mori flee to Inferius where Kyle learns about Mori’s work with the children, and he questions his frivolous playboy lifestyle. Torn between his love for Kyle and the guilt of aiding Max, Stefan comes clean about his role. For the first time in his life, Kyle is the one whose heart is shattered.

While the G.O.D. closes in on the wanted pair and turns Inferius upside down in their search, Arlo takes a turn for the worse. With time running out, Mori agrees to be Kyle’s unwed surrogate. Arriving at the toy factory to give Arlo the good news, Max, and Priscilla ambush them and, at gunpoint, threaten to hand them over to the G.O.D. unless Priscilla is impregnated on the spot.

At that moment, Stefan, and the children of Inferius swarm in and save the day. Trying to escape, Max falls into the “imperfect toy” garbage chute and is shredded like a rag doll. The unimpregnated Priscilla is shut away in a remote island convent, never to see sperm again.

Kyle, Stefan, and a pregnant Mori announce a new heir to Kincaid Toys is on the way, and in Arlo’s honor, they create the Stefan Foundation that provides medical care and hospitalization for all the children of Inferius.

A little too many un-necessary words try to keep it less than 30 words, max 25 would be better. Try this more compact - In the future becoming pregnant without a license is illegal so a gay bachelor becomes a criminal by producing an heir to inherit his dead grandfather's fortune.

Thanks, Kacee. Actually, I have gotten good feedback on the LL from a few execs, and I have found that trying to fit within a certain number of words is not always required.