Azadeh Nikzadeh is an Iranian writer and director living in New York City. She grew up in Iran amid war, political and social crackdown which is the heart of her interest in cinema and storytelling. She works on rarely-heard political, human right stories including her award winning shorts Vida, X and The Girl Sitting Here.

She was the sole Iranian recipient of the prestigious Fellowship Award from Asian Film Academy Busan International Film Festival in 2010, Top Youth by Iran’s Ministry of Youth and Sports in 2012, multiple awards and nominations with her shorts Vida (Writer) and Distribution support for The Girl Sitting Here from MidEast Women Organization.

Azadeh had done workshops and masterclasses with the masters of filmmaking including Abbas Kiarostami, Dardenne Brothers and Weerasethakul. She strongly believes in equal opportunities for women and participated in many filmmaking projects about or done by female filmmakers. She is a proud member of NYWIFT, The Sandbox Directors Collective and The Filmshop. She was a jury member in Winter Film Award Film Festival in 2017 and 2018. 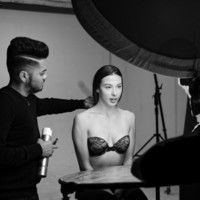