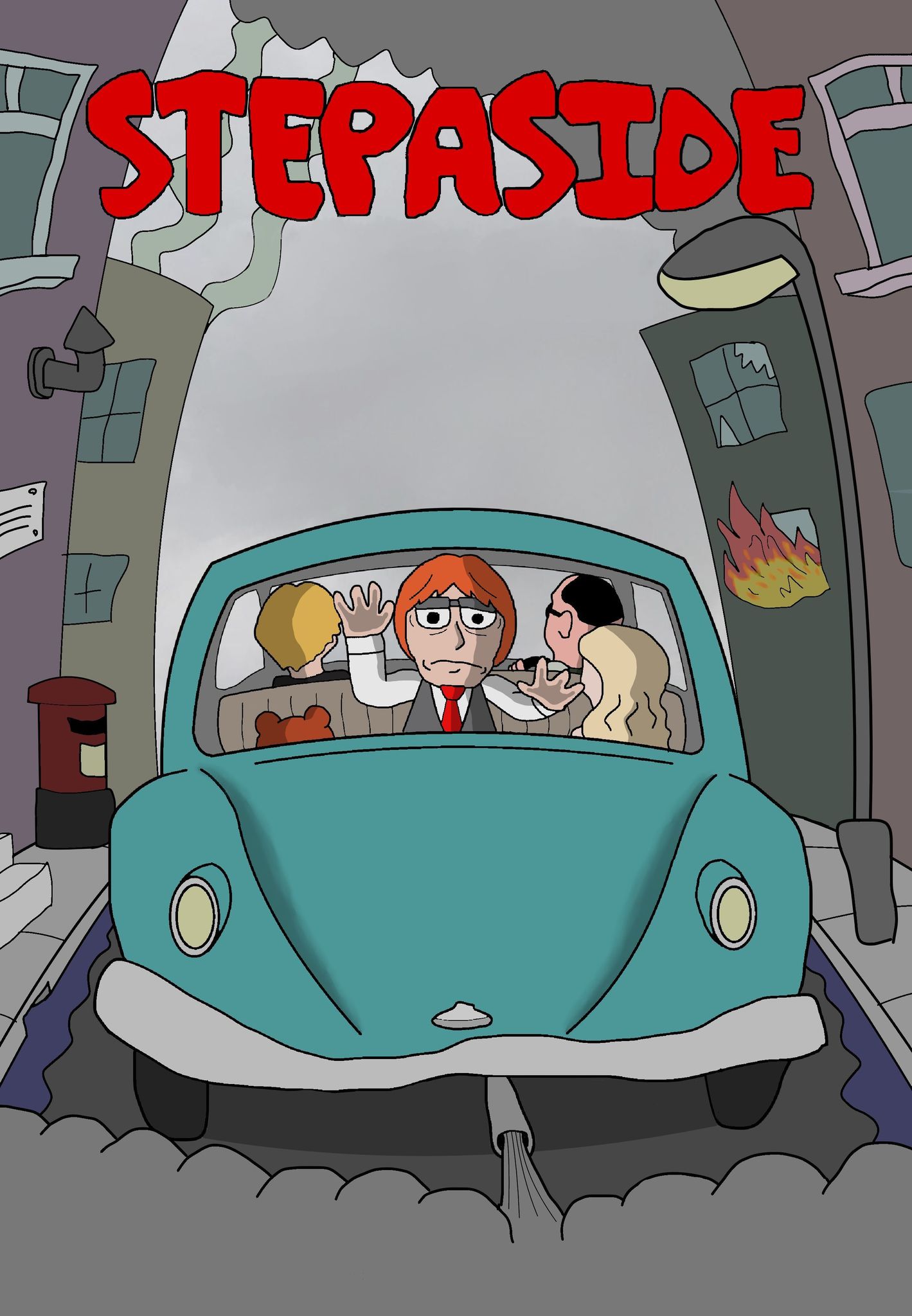 STEPASIDE - THE WORST TOWN IN BRITAIN
By Josiah Watters

‘Stepaside’ is an adult animated comedy about a well-to-do middle-class family who are forced to leave their quaint suburban life in Great London behind and relocate to a rough, working-class town in the north of England.

Aiden is attending his weekly therapy session, where his therapist expresses frustration that they’ve been unable to make any progress. After being collected by his parents, and returning to their home in Highgate, Simon breaks the news to Aiden and Freya that he has lost his job, meaning the family has to relocate to his late aunt Ruth’s cottage in the northern town of Stepaside. The family is vocally incensed by this. Nevertheless, before they know it they’re packed up and hitting the road.

The Arterberrys arrive in Stepaside and Aiden is immediately horrified upon seeing the town and the uncouth locals, particularly when he spots what appears to be a pimp having sex with a prostitute up against a wall in an alleyway. It is clearly a place someone of his stature does not belong. He is left even more disappointed when they get to Ruth’s poky cottage and realises he’s been allocated the box room in the corner of the house. Meanwhile, Simon and Cecilia meet their new neighbour, the obscene troll-like spinster Aretha.

Because he’s getting on her nerves, Cecilia sends Aiden across the street to the off-licence while the rest of the family unpack. At the off-licence, Aiden finds a boy the same age as him, Qassim, behind the counter, masturbating over a lads mag. Aiden asks for some cigarettes, which Qassim gets for him, before mocking Aiden’s posh voice and asking him if he has a sister he can bang. Before a repulsed Aiden can rush out of the shop, Qassim’s father Ahkid comes downstairs and scolds Qassim. Once he realizes Aiden is new in town, he tells Qassim to show him the way to school the next day, a prospect both Aiden and Qassim are horrified by.

Aiden and Qassim arrive at Copperfield High School the next day. Aiden is shocked when he sees the state of the place, as it’s even worse than his already rock-bottom expectations, and he fears for the future of his education, and his survival in general. Qassim tells Aiden that he’ll be fine as long as he keeps his head down, at which point Aiden is hit in the head by a rock thrown by Connor, who is taunting Shane and his gang. Aiden meets Qassim’s mates, Connor and Jamal, who are every bit as vulgar and common as Qassim. Aiden feels as though his life is cursed.

After experiencing a full day of school, Aiden is left even more dejected. He goes with Qassim, Connor and Jamal to the boy’s toilets where they all light up cigarettes. Aiden complains about how terrible everything is and how his life is plummeting downhill, which annoys Qassim, who doesn’t appreciate Aiden looking down on them. The headmaster, Mr. Patel, enters the bathroom and busts them for smoking, sending Aiden home early, but not before warning him to stay away from Qassim.

That evening in the cottage, Simon and Cecilia express their disappoint in Aiden for getting sent home on his first day. That night, Aiden decides enough is enough. He cannot live in this hell-hole. He orders a taxi back to Highgate and sneaks out of the house. He quickly realises a short ways into his taxi ride that the driver is not willing to go outside the city limits, essentially trapping Aiden inside Stepaside. He forces Aiden out of his vehicle, dumping him in the middle of downtown in the dead of night.

A terrified Aiden wanders around the dangerous streets of Stepaside, encountering tramps and the sound of gunfire. He by happen-stance runs into Qassim, who is nonchalantly graffitiing a wall. Qassim is completely at ease being on these streets at night, which shocks and confuses Aiden. All of a sudden, they’re accosted by the pimp Aiden saw as he entered town, who forcefully takes them back to his drug den.

The pimp, D’Rail, ties Aiden and Qassim up and reveals that he has been searching for Qassim because of his outstanding debt. However, when one of his prostitutes suddenly goes into unexpected labour, Qassim seizes the opportunity to wriggle loose from his ropes much to Aiden’s amazement. Qassim opens the window to sneak out, but at the last second has a change of heart, and begrudgingly unties Aiden. They escape the den together.

Outside in the alleyway, Aiden finds it difficult to believe that someone like Qassim would save him without having some kind of ulterior motive, so he gets his wallet out to offer him some money. Insulted, Qassim asks Aiden how he’s ever managed to make any mates acting the way he does, before starting to walk away. In a rare moment of vulnerability, Aiden tells Qassim that he’s never had a mate before. Qassim says that explains why Aiden is such a cunt.

The two of them exit the alleyway. Qassim asks Aiden if he still wants to leave Stepaside, to which Aiden replies that his life was already shit in Highgate anyway, so it doesn’t really matter. Qassim realises that the sun is starting to rise, so the two of them start heading to school as Qassim asks Aiden, again, if he can bang his sister.