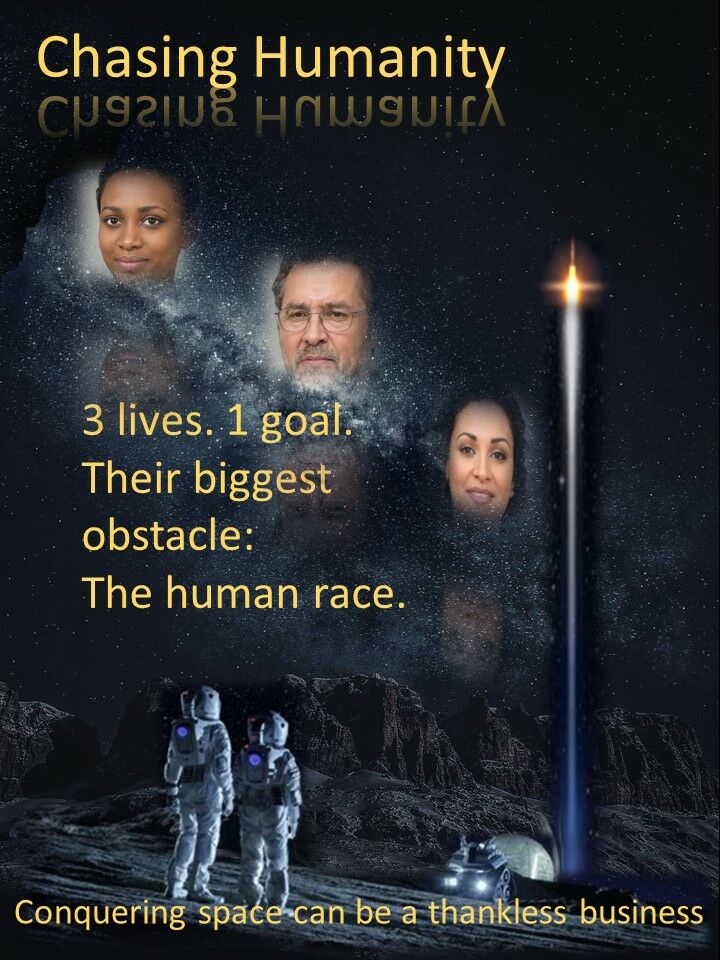 After discovering life on Saturn's moon Titan, three diverse people in a private space firm are torn between the dangers of a manned mission there or letting their troubled pasts destroy them.

Conquering space can be a thankless business.

A 1-hour serialized drama set in the near future, revolving around three lives in a private space exploration company known as CosmosNow (CoNo): its headstrong founder of losing control of his company; the guilt-ridden manager of lunar ops struggling to move on after losing her same sex spouse and child; a wide-eye student entering CoNo’s academy based on an entrance exam fudged by her favorite teacher. Probes finding life on Saturn’s moon Titan offers each an opportunity at redemption and purpose. It explores not what it means to be human, but what is the concept each character struggles to serve, and define, called humanity, (the driving question) and how the Titan find helps each character achieve it.

JOHN BLAISÉ, nearing 60, founder and CEO of CosmosNow (aka CoNo) created a space empire to include a commercial/military satellite launch system, a lunar base with science stations, manufacturing labs and resort, space exploration vessels and an outpost on Mars. A private business, nearly all revenues go back into his company, making friends and enemies along the way. Intelligent, he’s almost naïve when it comes to believing everyone shares the same vision when it comes to the conquest of space.

In celebration of the 30th anniversary of ‘The Speech’ John shocks the world again by announcing he will turn CoNo over to a board of directors to carry on his work. Ostensibly to ‘pass the torch’ and concentrate on specific the Mars colony, he’s tired, knowing he’s nearer the end than the beginning; wants to grow old with his wife and reflect on -and defend - his legacy. Immediately, the vultures see an opportunity. His young nephew ETHAN PAULSON, involved with CoNo’s lunar mineral business, sees an opportunity to take over sell off parts into separate, private for-profit companies with the help of other investors (a la young Gordon Gekko). Later on, he changes his mind and wants to control CoNo as a single entity.

A new class begins at the Space Technology, Engineering, Exploration, Mathematics & Science Academy (STEEMS or the Academy) founded by John ‘for the purpose of preparing our youth for the conquest of space.’ MACKENZIE (MACKI) WILLARD (19), raised in a lower-class American family, begins her studies, bent on living the dream. ANDREI (ANDY) KOZLOV (early 20s) is a Russian upperclassman trying to live up to the family name. They navigate an academy so prestigious it easier to get into MIT or CalTech. Once in, Macki discovers one of her teachers fudged a test landing her a spot at STEEMS. The teacher’s willing to take the wrap, but dies unexpectedly beforehand. If discovered, she has no way to defend herself. Joseph, although intelligent, isn’t really into the rigors of study. Given his strong sense of family he doesn’t want to disappoint them, even at the expense of his own well-being. An excellent student, he does only what’s necessary to get through.

YEVETTE KOENIG (early 40s) manages lunar operations. A former STEEMS graduate, she’s led a successful career. Her same sex spouse and their only child, with others, died in plane crash years before. Her despondence seen as a reason she’s passed over for the command of the newest exploration ship the VALENTIA TERESHKOVA. Like others, she’s totally loyal to John, and sees him as the savior of space exploration. Despite a stoic façade and consummate professional, she questions her life, more so after John’s announcement and the changes it may bring.

Everything changes when probes on Saturn’s moon Titan find evidence of animal-like life. The find breeds excitement and fear. An assignation attempt by a zealot puts John in the hospital, where he learns he has a genetic heart condition, disqualifying him from future space travel. Keeping it a secret, seeing CoNo slip away from him, he’s determined to send a manned mission to Titan. This would be the ultimate validation of his lifelong efforts. Along the way, he begins realizing he may have caused more harm than good by his workaholic, introverted, unsociable, speaking his mind to the point of crassness persona.

Initially, Yevette welcomes a relationship with Adelina. But guilt pushes her to end it, using the uncertain future as an excuse. CoNo taking on a corporate structure, life without her dead partner and child, causes her to reassess her life. Feeling little is left for her, the Titan find gives her an opportunity at self-fulfillment. She volunteers to pilot the lander. However, the journey begins instilling a renewed lust for life. Choosing to hide her secret, Maki immerses herself into the rigors of STEEMS while dealing with the personalities there.

Shunning close relationships, her friendship with Joseph helps her with the rigors and personalities of STEEMS. He comes to admire her dedication and shamed by the lack of his own. Earning an internship on the moon, she becomes part of the Titan mission’s experimental nuclear rocket team. Seeing an opportunity, she wrangles her way onto the mission. If successful, no one will question her in the future. Through it all, she sheds her fear of discovery and relationships.

FOR ALL MANKIND- Instead of the space race not ending, a company like SpaceX came around in the 1990s.

THE FIRST-Similar struggles not only to get to Mars but convince people we must stay and expand.

AD ASTRA- Depicts realistic space travel, a character on a quest and how that changes them.

THE EXPANSE- Dealing with the unknown, the dangerous, and people with different ideas about politics, right and wrong.

With the discovery of life on Saturn's moon, Titan, five lives converge: the headstrong leader of a private space colonization firm must fight for control from his upstart nephew; the flight ops director deals with the mission stress and issues in her marriage to a {female social worker}, while a wide-eyed student will do anything to go on this mission, but it might be a death sentence.

Still a bit long, so maybe consider focusing just on the main-est of the main characters' problem/stakes.

The head-strong leader of a private space firm must work relentlessly for a successful manned mission to Saturn's moon Titan, but he faces challenges not only from competition but from within his own family, and every challenge might mean not only death to the project, but all aboard.