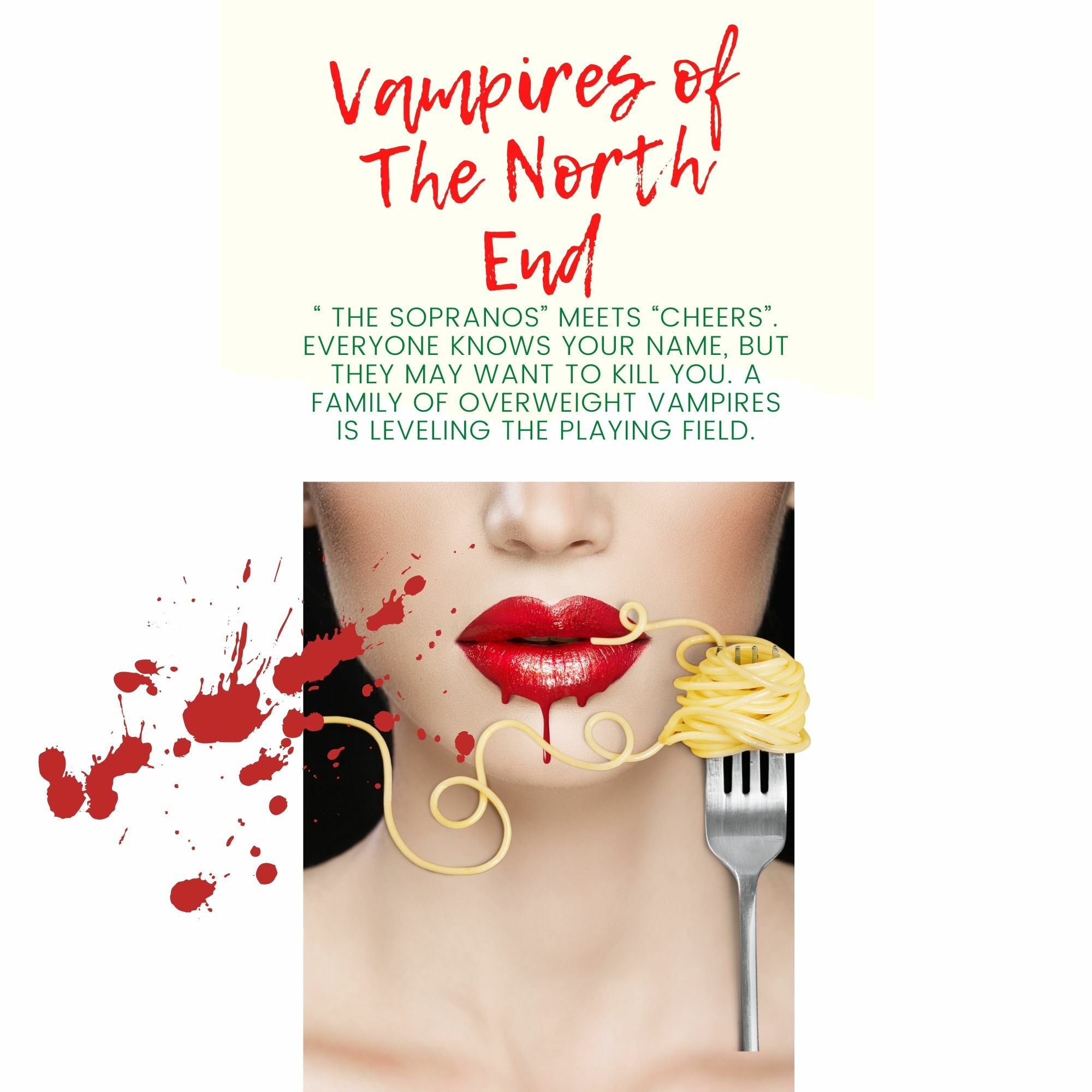 VAMPIRES OF THE NORTH END
By Penner Dang

Vampires of the North End is “ The Sopranos” meets “Cheers”. Everyone knows your name, but they may want to kill you. A family of overweight vampires is about to level the playing field.

The Mancini family has lived in Boston’s North End for centuries. When James is about to turn twenty-one on Christmas Eve her parents are faced with the difficult task of explaining to her that they are a family of overweight Italian vampires and she must complete her first kill before the clock strikes midnight.

The lead singer Tokyo Oslo from the boy band Vikings of the Heart meets James when he is running from a crowd of screaming girls after a concert he sang at Faneuil Hall. Tokyo is instantly attracted to James and her kindness. He uses his money to buy real estate and give to animal charities.

James’s Papa Leslie Mancini owns the gelato shop on Salem Street. 88 Flavors and Counting. All of the gelato flavors are named after people the family kills. They kill only bad people. The people are then cut up in bite-size chunks and frozen in the store freezer for easy blending protein shakes. Leslie is a huge Red Sox fan and enjoys tanning beds.

Benni is James’s Mama. She is a real estate investor but only buys and flips zombie houses. No one can ever win against her as they have all the resources to buy any house in Boston.

Willy is James’s brother. Willy is directing a shoe-string budget zombie movie called Freedom Trail Zombies. The locations are the stops of the Freedom Trail. Loto, Parvankin and Jedda are his best friends and they are the actors in the movie.

James is shocked when her parents break the news. This explains why no matter what she does to diet and exercise she remains the same weight. She finally has met someone she loves and now must break the news to Tokyo.

James befriends Meo Bova AKA Meatball the son of the Bova 24 hour bakery on Salem St. They enjoy late-night binge eating and James hooks Meatball up with her best friend Jedda.

James is interning as a child protective caseworker. Her first case is an eight-year-old boy named Hank. Her gut tells her the Foster father is abusive and she decided that he will be her first kill. After she kills Teddy the abusive foster care parent she finds out that Hank has a stepbrother and they are both going to be adopted by a young family.

Tokyo accepts the fact that James is a vampire. He knows that they will be together for the rest of his mortal life. They are flying to China for Tokyo’s concert and James is saving room to kill the workers of the Chinese Dog Meat Festival.