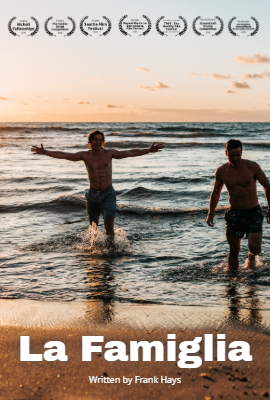 After being accused of impersonating a United States citizen by a Homeland Security officer, an Italian immigrant goes into hiding and finds work with a divorced man with two children.

When life becomes unfair, sometimes there is no other way but to flee from what troubles us. So some of us run away from the law, and some of us from ourselves. Yet, the truth finds a way to catch up with us and finds a way to break through our walls of pretentiousness. La Famiglia is a screenplay that deals with the act of fleeing from danger, revealing the consequences of lying to ourselves and others.

The screenplay presents two different men that are escaping from their troubles. Antonio Camerino is a gay man wrongly accused of impersonating a United States citizen. He goes on the run, hiding from the law, finding a job caring for Davide Calabria and his sons, Luca and Franco. The two men connect through a need. One needs to hide from police officers, and the other needs a caretaker for his children. These characters' common denominator is that they both lie, which brings unrest to their loved ones. Davide keeps his sexuality a secret from his boys and his fashionista fiancé, Dorothea Phillips, even though she senses the truth. In no time at all, Davide falls in love with Antonio bringing forth his true identity. Dorothea figures out the bond they share and becomes determined to separate them.

From the start of its plot, La Famiglia shows the unrest of its characters, building up their efforts to hide until the characters cannot hide anymore, thus spilling their hearts out and embracing honesty. Yet, out of continuous pain and lies, a paradoxical love is born, snatching away the masks of the two men who have no other option but to embrace this undeniable feeling that consumes them. Once the lies are over, the two characters manage to find happiness, and the environment around them supports their romance, leaving no more room for prejudice or shame.