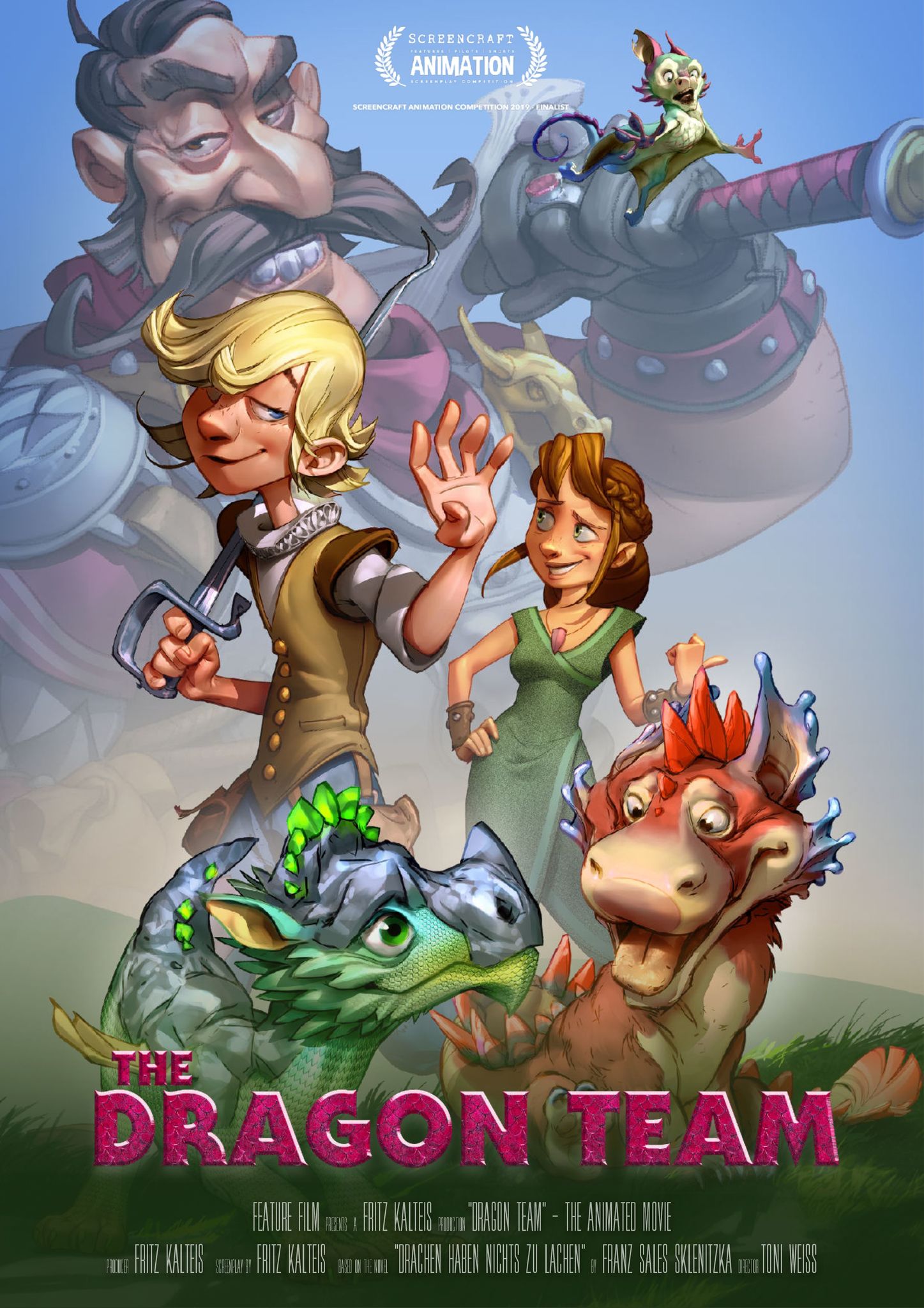 THE DRAGON TEAM
By Fritz Kalteis

In a world where dragons are hunted mercilessly, a young, pacifist, vegetarian and reluctant knight sets out  to prevent them from certain extinction. But to do so, he must pick up his rusty sword and win a tournament - against the kingdom´s most fearsome dragon hunters. Hopless - if it was not for his equally misfit friends.

Ottokar von Zipp is a bookworm, a dreamer, a dancer, a vegetarian, a pacifist, and passionate about dragons. Unfortunately, he lives in an age in which dragons are hunted mercilessly. In fact, his cousin and neighbor Sigmund Silvertooth-Floretto is the worst of the dragon hunters - and even poaches the few remaining dragons who inhabit Zipp's forest.

At the annual council meeting, Zipp asks the duke to ban dragon hunting and is promptly ejected - but not before he discovers the details of an upcoming tournament. The winner will be permitted to marry Gwendolyn, the duke's daughter - and the duke will grant a single wish.

Desperation is beginning to set in when Zipp's best friend, the minstrel popstar Archibald Exeter, appears. He is due to perform at the tournament's halftime show and attempts to convince Zipp to compete in order to save the dragons. Zipp refuses. He knows he has no chance against knights like Silvertooth.

Everything changes when, at the last moment, Zipp saves the young dragon Clemens from Silvertooth's clutches. Clemens was destined to join 12 other dragons on the barbecue for the tournament banquet. Zipp realizes he must, finally, become a real knight. In order to save Clemens and all the other dragons, he will have to win the tournament and convince the duke to end dragon hunting.

However, Zipp can barely hold a sword, let alone use one.

Zipp's trusted manservant Michel does his best to knock the young knight into shape, but it is a disaster. Zipp simply cannot handle weapons. In fact, he can barely read the tournament rules without injury. Meanwhile, Silvertooth continues to hunt dragons for the tournament banquet. Stella, a young emerald dragon, is able to escape and hides in Gwendolyn's quarters in the castle. The headstrong young woman soon realizes that dragons are friendly creatures rather than monsters and decides to protect Stella and join forces with Zipp. The two come to an agreement: Gwendolyn will help Zipp win the tournament. In return, he will make sure she is not married off against her will.

Eventually, Zipp learns how to almost hold a lance and not collapse under the weight of his rusty armor. But Zipp's worst fears come true in the first rounds of the tournament. Silvertooth goes from strength to strength, while Zipp becomes a laughing stock.

Zipp survives the first rounds with a lot of luck and a little bit of trickery from Archibald. All the same, he is in bad shape. The only thing that helps is the "Guaranteed Dragon-Free Ointment" provided by Ms. Long, Zipp's tofu supplier who escaped China when Genghis Khan invaded.

Zipp and Gwendolyn watch Archibald's halftime show, accompanied by Clemens and Stella. Silvertooth appears and captures the female dragon. Zipp, Gwendolyn and Clemens escape into a nearby cave, which Zipp immediately recognizes as the long-lost Cave of a Thousand Dragons. The cave contains proof that humans and dragons once lived together in peace. Zipp realizes that the kingdom's poor harvests and dying nature are directly related to the decreasing number of dragons, and that he must win at any cost.

But first Zipp must defeat the legendary Eberhard von Straubing, an almost impossible task. Just before the competition begins, Straubing's digestive system begins playing up - to the horror and amusement of the spectators. The ensuing scandal carries Zipp into the final, but Silvertooth's manservant reveals that Straubing was secretly fed laxatives - by Zipp's team. And he has evidence: dragon ointment with a laxative effect!

Zipp is horrified - he had no idea! Gwendolyn and Archibald are forced to admit that they have little faith in Zipp's abilities as a knight and that they hatched a plan to help. Zipp is disqualified from the tournament, and it appears that all is lost.

At the last possible moment, Zipp remembers the tournament rules (which only he has ever read) and wagers all his possessions, including his forest filled with rare dragons, in order to remain in the competition. As far as Zipp is concerned, his friends have let him down and he turns his back on them, retreating into the cellar of his run-down castle with Clemens. The cellar is full of old hunting trophies. Clearly, Zipp's father was an even greater dragon hunter than Silvertooth - at least until he didn't return from a crusade. Zipp's self-pity is interrupted by Ms. Long, who reveals that she, too, knows the intertwined history of humans and dragons. She tells Zipp not to fight on his opponents’ terms, but to rely on his own strengths.

The grand final. Silvertooth waits for Zipp to appear, intent on finally vanquishing his rival and taking possession of his lands. He waits and waits, but there is no sign of Zipp. Will Gwendolyn be forced to marry Silvertooth? Are the dragons finished? Michel, who trained both Zipp's father and Silvertooth, takes Zipp's place in the tournament.

Michell fights hard but is about to be defeated by his former pupil when Zipp finally appears. He seems completely transformed. Silvertooth is unable to land a single blow on Zipp, who gracefully ducks and weaves like a blade of grass in the wind. Gwendolyn is impressed. Silvertooth becomes weaker and is unable to keep up with Zipp.

Meanwhile, Clemens frees Stella and the other dragons from the cage they are being held in. It is the first and only time Clemens spits fire - and it is more of a burp caused by a large portion of radishes. The dragons go free just as Silvertooth launches his final cowardly attack while Zipp's back is turned. Clemens piles onto the attacker, followed by a dozen dragons including Stella. The initial horror soon vanishes as the dragons prove to be anything but monsters.

Zipp is declared the winner and everyone cheers.

The duke asks for Zipp's wish. Zipp demands dragon hunting be banned, and the duke is forced to honor his promise - with a little convincing from Gwendolyn.

The following weeks are a dream for Zipp. The market stalls below the castle all proudly display Zipp's "100% Dragon Free" seal. The local children are dressed in Gwendolyn's DragonDream fashion brand. Clemens and Stella are expecting.

Everything seems to be going well when Zipp receives news that Genghis Khan has once again invaded China on a mission to exterminate the kingdom's last remaining flying dragons - accompanied by Zipp's father.

This is a case for: The Dragon Team.