10 Reasons To Release Your Feature As A Web Series

Posted 6 years ago by Kelly Hughes 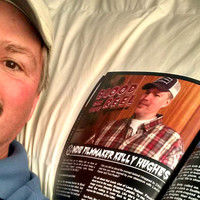 You can now shoot a movie on a phone.

You can edit like a pro on a laptop.

The revolution is here.

So why are we stuck on old business models? Why do we still think the best way to further our indie careers is to make a low budget feature, do the film festival circuit and be discovered and signed like it’s 1999?

I’m over 50. (Yikes!) and it’s time to let go of decades-old indie filmmaking ideals. It’s time to take inspiration from the younger crowd. The teenagers and 20-somethings who embrace up-to-the-minute technology and modern viewing habits. I can feel them nipping at my heels. It’s time to nip back.

So my latest movie is in the can, but instead of editing it into a 90 minute marvel, I’m changing the rules and refashioning it into a web series.

This is a horrible idea because:

1.  It’s more prestigious for my actors to tell family and friends they were in a movie.

2.  I can’t use it to be next year’s darling at Sundance.

But I think it’s also a good idea and here’s why:

I can edit it in little chunks. Causing less strain on my computer’s RAM, if not my brain.

If I upload it to YouTube, people can watch it sooner and not have to wait for the festival/Netflix/DVD release cycle.

Fans, reviewers, trolls…they can all have a go at it.

Maybe it’s not the thrill of Cannes, but for actors who have had to wait a year or more to see their work edited and released, this could be a pleasant development and they could even use it to supplement their reels.

YouTube has a subscribe button and lets you add links to other social media pages. So episode by episode, as you lure people in to watch, you can capture them as an audience for future projects.

Should we pander to them? I don’t know, but a web series lets you chop your story down into digestible chunks and at this stage, I’m willing to try out the format and see how people respond.

7.  You Can Always Turn It Back Into A Full-Length Movie

But after the exposure of an online web series, I think I’ll eventually release it as a Season 1 DVD. Something like that, which lead me to…

8.  You Can Turn It Into A Longer Range TV Series

When I first wrote it, I had no intention of this being anything but a self-contained movie, but I fell in love with the characters and realized they were people I could spend more time with, explore more of their back stories, play with some plot twists and develop their worlds more. It came down to: “Would I rather start on a new feature, or write more adventures for these existing characters?” I chose the latter and I’m already glad I did.

If you choose to monetize your YouTube channel (i.e. let YouTube play ads before and/or during your videos), you need a lot of traffic to make any decent money, but it is possible. Maybe not as much as that Swedish video game player makes, but some popular web series creators earn a nice chunk of change after building a big subscriber base and releasing a regular flow of content.

And maybe we need a wake-up call. To do something to remind ourselves that technology has permanently changed the way we consume media.

I know I’ll have some challenges. For each three to five minute episode, I’ll have to create a mini-movie with a beginning, middle and end. Can an existing feature script be broken down like that? I’m not sure, but if we’re writing compelling scenes in our feature screenplays, shouldn’t they already have a mini-movie-like structure? and end with little cliff-hangers?

Instead of over thinking it, I’m just going to do it and see where the process (and hopefully my new iPhone-savvy fan base) takes me. For the next project, I’ll be open to the new gadgets. The new outlets. The new formats.

Because I’m not ready to become a dinosaur quite yet.

Right now I'm concentrating on writing a memoir about my days creating underground video and theater in Grunge-tastic Seattle in the early '90s. And writing celebrity interviews for my column on my website.

Kelly Hughes’ new occult thriller The Mephisto Box premieres on YouTube on April 29. You can subscribe to the channel and watch a new episode every Friday at: https://www.youtube.com/channel/UClw8OK_31cFJZYiVupX8_dw