HERE ARE THE WEEK 5 WINNERS!

FORCES OF DECADENCE by Phillip Hollins

"A military cop chronicles a series of incredible events as a lawyer preps a high-profile international smuggling court-martial involving an attempted assassination case against one of the most decorated Green Berets in U.S. history."

THE NIGHT WITCHES by Steven Prowse

"With wood and canvas biplanes, no radio, no lights, no defenses and no parachutes, just bombs, these WW2 pilots terrorized the German front line night after night - they just happened to be women: a true story."

"A group of largely forgotten B- and Z-grade movie actors must band together, battle monstrous creatures, and survive the night when an ancient evil is unleashed at a horror film convention..."

HOME OF THE DEVILS by Steven D'Addieco

"After connecting the death of a rival school's quarterback to a disemboweled cat, a young new teacher at an affluent suburban high school must defend his life and profession against devil-worshiping helicopter moms."

HERE ARE THE WEEK 4 WINNERS!

"A Black architecture nerd's determination to win herself a man and a job before graduating from her predominantly white university takes a turn as rising racial tensions in the country hit a little too close to home."

MAN OF COLOUR by Martin Keady

"A biopic of Walter Tull, one of Britain’s first black professional football players, who was driven out of the game by racism (even from within his own club) but then became one of the most extraordinary heroes of World War One."

THE CURATOR by Danny Matier

"When a touring theater company are to perform at a remote art exhibition, it quickly becomes evident they are to be the bloody tableau in an art instillation held for a very select audience who will bid to watch them die."

HERE ARE THE WEEK 3 WINNERS!

REAPER MOM by B. Patrick Yates

"After accidentally killing the grim reaper an altruistic single mother is forced to replace him."

ROCKSTARS VS ZOMBIES by Andrew Ward

"The world is brought to it's knees by the zombie hordes. The hope of mankind rests with a group of rockstars...If they can stay sober long enough."

"In 2030, a downtrodden group of robinhood-esque militants, called Mil-Z, enacts revenge on aging politicians who left the world in ruins while steeling from everyone they claimed to represent."

HERE ARE THE WEEK 2 WINNERS!

STROM by Zach Tirone
“Strom” is the true story of Senator Strom Thurmond, who while being a radical opponent of civil rights, fathers an African American daughter and maintains a secret relationship with her throughout his quest for the Presidency"
CHURN DOWN FOR WHAT by Kaitlyn Gatto
"A young Amish woman, destined for a life of child-rearing and butter-churning, leaves her Pennsylvania farm for the Big Apple to pursue her dreams of playing the triangle."
HALL OF RECORDS by Joanna Bloem
"After her mother and famous Archaeologist father mysteriously disappear in Cairo, their spunky daughter carries on her father's dangerous mission to re-enter a secret chamber of the Great Pyramid."

HERE ARE THE WEEK 1 WINNERS!

"A delusional visionary ignores the steady implosion of his own life by launching a service app called 'better!' where users can hire him to be their stand-in during life's most unpleasant moments."

THE PRICE IS LIFE by Elena Lockleis

"During a housing crisis, a struggling young married couple are forced to sign their lives away to a game that promises freedom and luxury at the cost of pain."

JAZZ ACROSS THE FRONT by Gillian Twining

"A Black mother must smuggle key intel out of nazi germany and across europe to the allies during WWII while maintaining her identity as a popular jazz singer."

GODS AMONG MEN by Eddie Goree

"A veteran agent, and his rookie partner are tasked with a case of stopping a serial killer that targets former superheroes."

Don't see your name? Not to worry! New winners are announced LIVE throughout the month of October every Friday at 12pm during our "That's a Movie" Logline Contest Webcast!

Does this sound familiar? You spent months - perhaps even years - perfecting your screenplay or pilot and now, you’re ready to take that project out into the world. But then, someone asks you what it’s about, “a quick one-liner,” and you freeze! How do you boil down your entire narrative, your protagonist’s journey, the obstacles, and the stakes all into a single sentence?

Is Your Logline Sabotaging Your Chances of Getting Read?

Have it reviewed by an Industry Professional for FREE

(and potentially win some awesome prizes)!

It’s shocking but true: even if you write the most groundbreaking story in history, if you don’t have an effective logline, your story may never break out in this crowded market! Why? Because industry professionals (producers, managers, agents, filmmakers, and executives alike) routinely hear hundreds of ideas and make quick decisions based on loglines. Through this single sentence, they can assess the uniqueness of the project, “see” your story’s structure, and both your “vision” and “voice” as a writer. And after hearing your logline, if an industry professional says, “That’s a movie!”, it is perhaps the best compliment a writer can receive.

So, what do you think? Would your logline catch the eye and the imagination of industry pros?

In our neverending mission to support the growth, education, and access of screenwriters all over the world, Stage 32 is thrilled to announce our “That’s a Movie!” Logline Contest! Throughout the month of September, you’re invited to submit your loglines for your original feature, TV pilot, or short film to our panel of industry judges comprising filmmakers, producers, managers, and executives.

This panel includes Filmmaker Doug Atchison (AKEELAH AND THE BEE, BRIAN BANKS), Producer Aimee Schoof (10 Sundance, 4 Tribeca and 3 SXSW premieres), Netflix Director Mike Disa (“PARADISE PD”), Producer Bradley Gallo (GREEN HORNET for Universal), Literary Manager & Producer Andrew Wilson (Emmy-nominated “SELFMADE”), Literary Manager Spencer Robinson and many more!These pros will review each logline, offer their expert opinion and pitch their favorites LIVE every Friday throughout October & collectively decide whether or not “That’s a Movie!” (or a series, or a short). Writers can join the LIVE webcasts every Friday in October to find out if their logline was selected! The writers of the winning loglines will receive exciting prizes including FREE PITCH SESSIONS, FREE 30-min & 60-min CONSULTATION CALLS, FREE PREMIUM & STUDIO COVERAGE, FREE MENTORING SESSIONS, FREE NEXT LEVEL WEBINARS and more from Stage 32! There are over $10,000 in prizes at stake! That’s right! This contest is FREE to enter and you are able to make as many entries as you like! ENTER HERE NOW! But hurry! Submissions close on September 30th at Midnight! 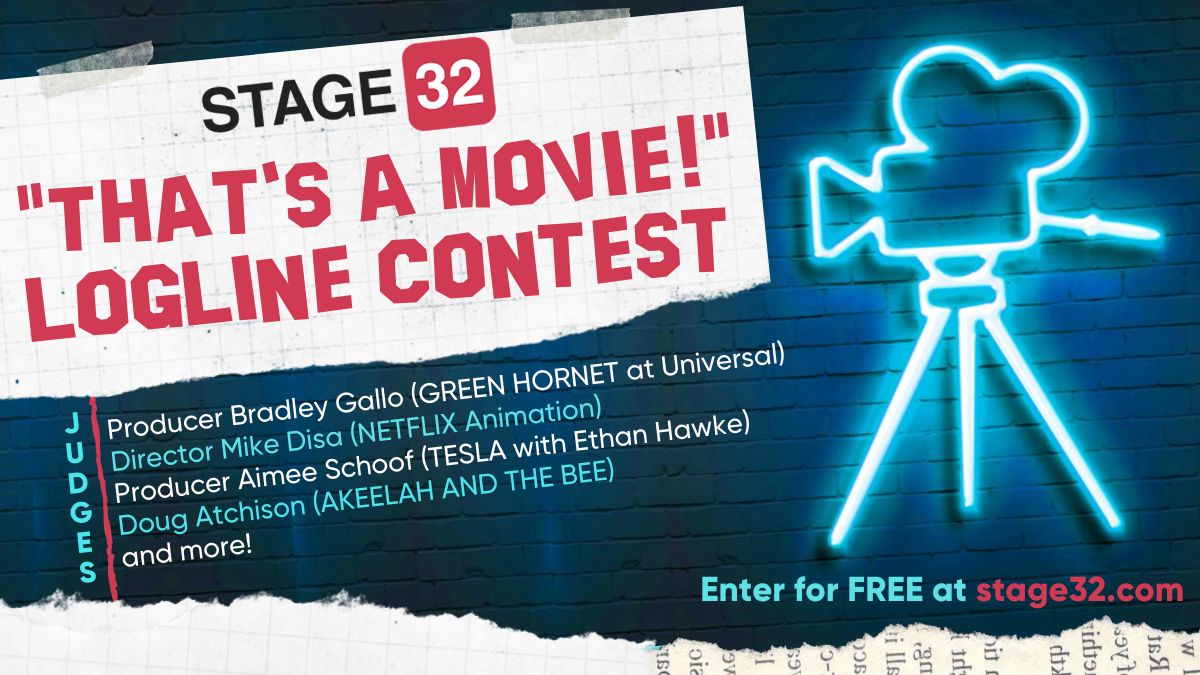