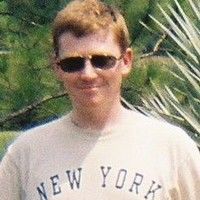 ACT ONE: PANDEMIC, YOU SAY?

Things were going great. We had just finished shooting our first horror feature film. I had spent the last four months working with the editor and now it was in the hands of our sound and colour experts when… calamity struck, in the shape of our old friend Covid-19.

Allow me to explain. Under the banner of Vamoose Productions, our newly formed production company based in Manchester, England, we had just finished our first feature film, the realistic urban vampire film “Boy #5”. Flushed with pride at our soon-to-be-really-successful movie, we launched into production for our next film, a sprawling crime drama based on a bestselling novel.

Then, the pandemic hit.

Here in the UK we were plunged into total lockdown. Restrictions meant no mixing of households, social distancing. Pubs, bars and restaurants shut down. Not even a cappuccino or latte were to be had anywhere. The horror!

And then… the idea. Or rather the germ of an idea.

We had all been using Zoom way too much. So, I figured, why not a horror movie set on Zoom?

Don’t worry if this all sounds familiar. We are talking about way back in July, before “The Host” became a global sensation.

There’s an old screenwriting term for this type of idea: “The smell of the rain on the road at dawn”. Well, I had that smell well and firmly entrenched in my nostrils. It was time to write the script! 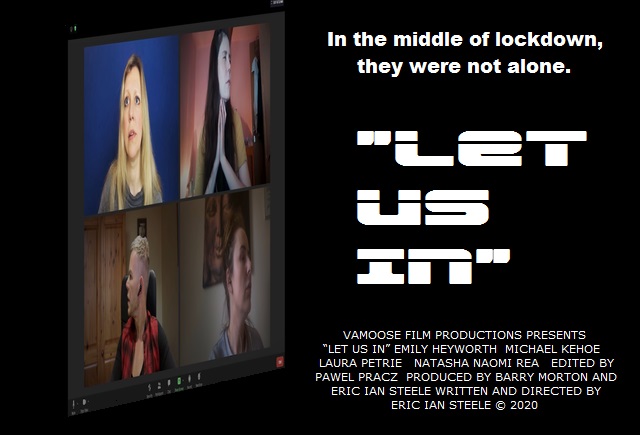 One of the most important lessons I’ve learned as an indie filmmaker is that you have to work with what you have. If you wait for money, the perfect location, or the perfect time, you will wait forever. The beauty of this idea was that we needed no locations. Everything would be filmed in people’s bedrooms or lounges. Nobody would have to mingle with anyone else. The actors could all shoot it themselves over zoom!

The first draft of the script, I am ashamed to say, may have featured zombies. Zombies and aliens. Yes, it was a step too far for my co-producer who accused me of being rather worse for drink when I told him about it. Ahem. One small rewrite later, and the zombies were gone. Sure, the flying saucer was going to be a bit of a problem… 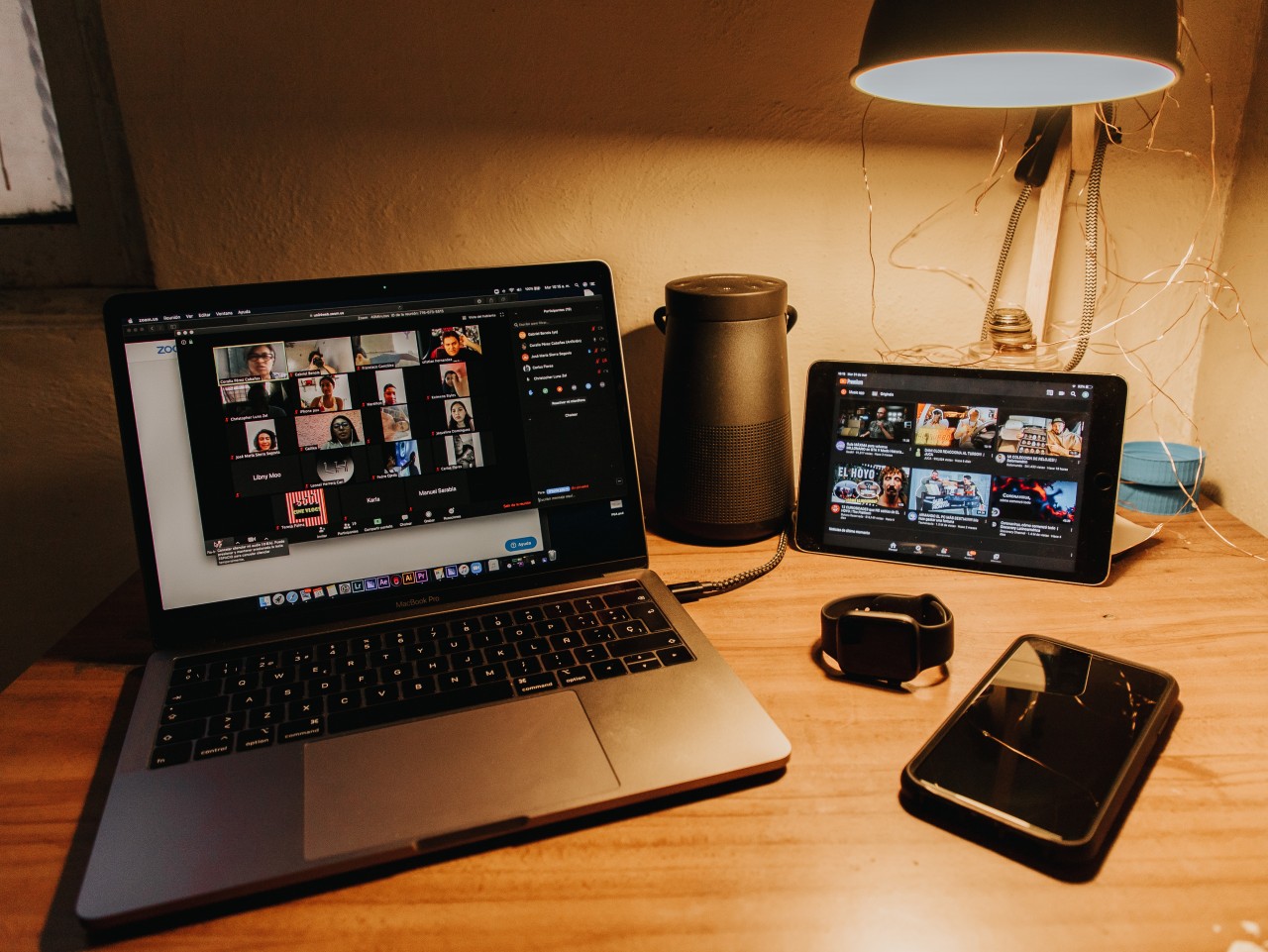 We got the script down to bare essentials. This was going to be difficult enough, as we didn’t have access to a Hollywood budget, an editing facility or a soundstage. In the end, we boiled down the story to a lonely young woman in quarantine who is communicating with her friends via zoom when an alien invasion happens outside. Or does it? The truth is that the alien may not be what they or the audience thinks…

We thought we had a clever twist on the usual “There’s a slasher behind you!” kind of social media film that we had seen before. Script in hand, we discussed how we were actually going to make it.

We had several problems:

I may have been responsible for the last problem.

Fortunately, my producing partner is a technical wizard. Even more fortunately, I am a skinflint who refuses to spend money on production. This last trait is very useful when you are making low-to-no-budget films.

We hit upon a solution. 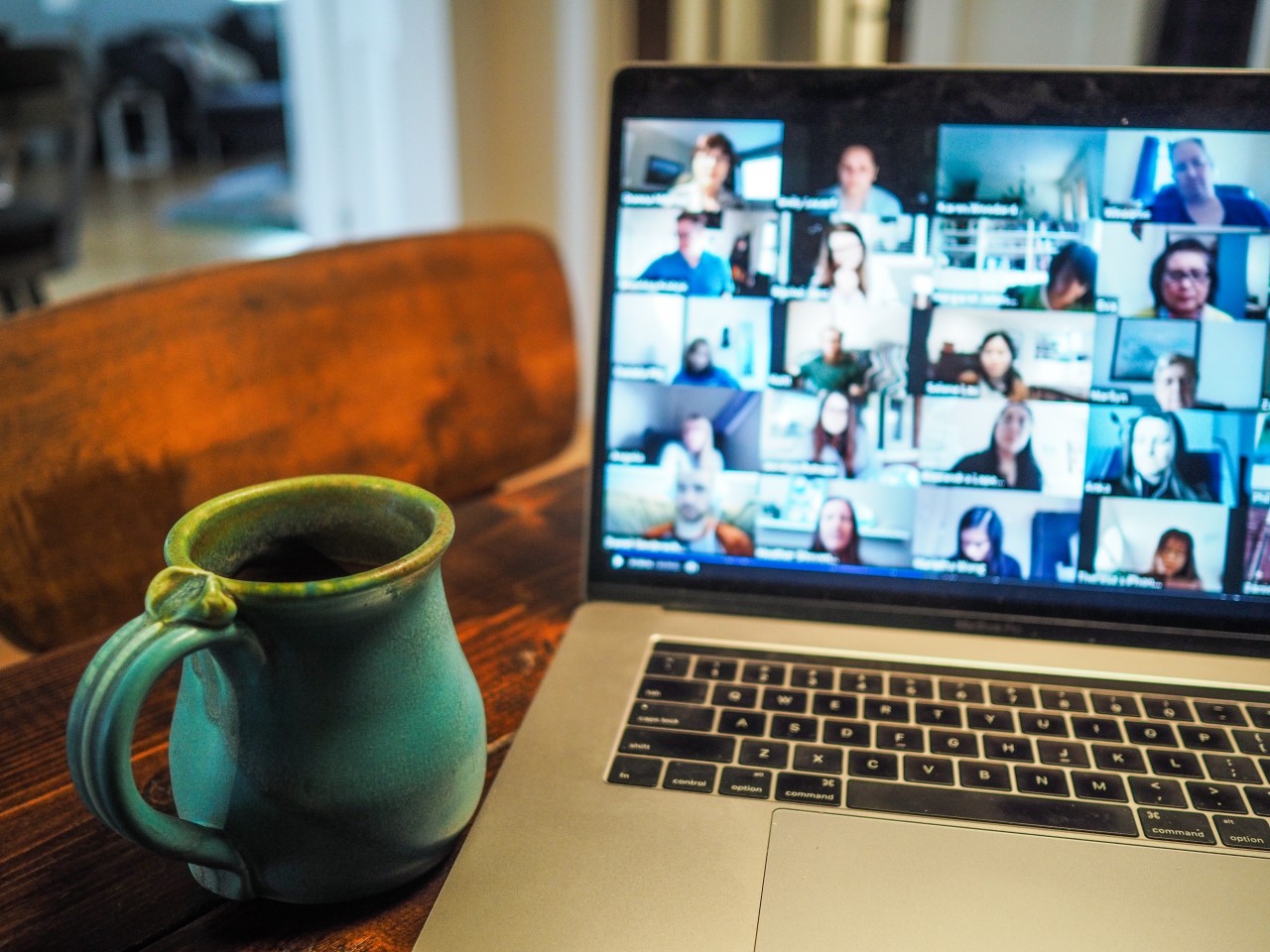 We live in a wonderful age. A digital age. An age where lots of things can be made to look real at the touch of a button.

Unfortunately we also live in an age where things cost money.

We decided to go with the simplest solution. We only had one camera. So we would ask the actors to record themselves individually on their own phones. Then we would doctor the footage in postproduction to make it look like it was all being done on zoom. We would greenscreen all of the actors who moved around. Then we would insert the backgrounds of the rooms behind them. We decided to record the sound using portable microphones which could be attached to the mobile phones. Simple, no?

The script called for some special effects. Fortunately we managed to do these with the help of four identical alien masks, some creative lighting, and several plastic freezer bags from the local supermarket. If you want to know what those were used for, I’m afraid you’ll have to watch the finished film. 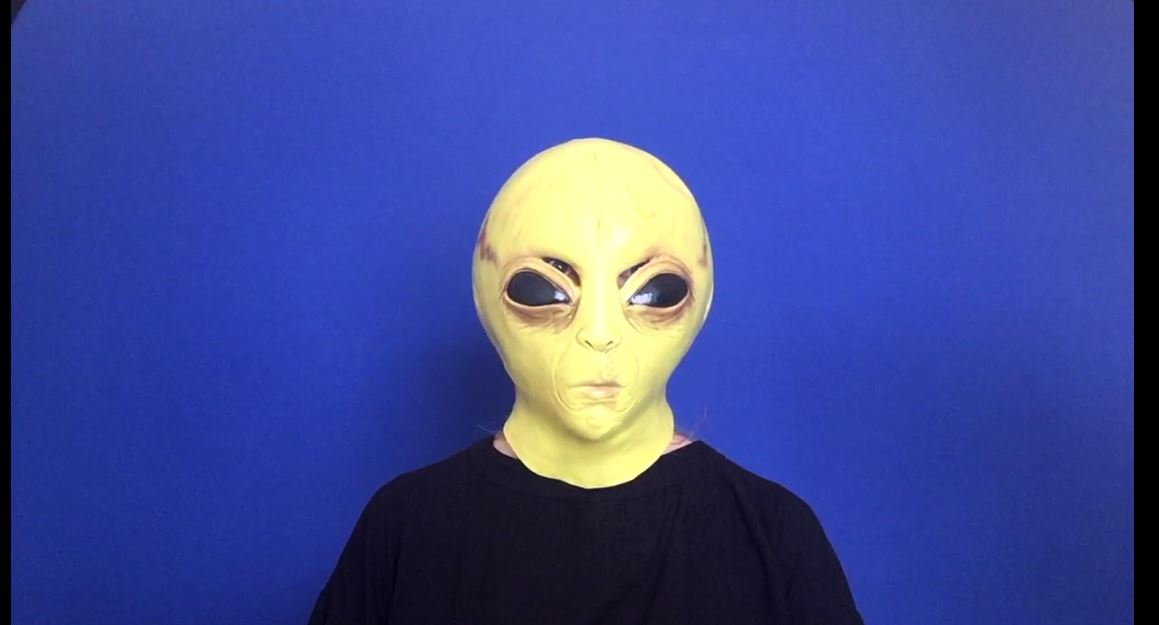 We did some test runs on zoom. We got the lighting issues sorted out so that the greenscreen worked. This was difficult because we couldn’t be there with the actors to correct the lighting, so we had to rely on them getting it right on the day. Note: actors are not technicians. We also had some problems with colours. Greenscreens are really good at getting rid of green. This causes problems if, say, your alien is slightly greeny-yellow. The solution is simply to switch to a bluescreen instead. Fortunately, we had both.

So far so good.

Then a real problem hit.

When we rehearsed the script with each actor, we realized that all of their timings were different. Nobody knew when to pause or to speak. This was especially troublesome as some parts called for two or more actors to talk over each other.

Fortunately, one of our actresses cracked it for us. She pointed out that it would be better if the actors could all hear each other talking while they filmed themselves. That way each person would know what they were reacting to. Brilliant! Sometimes it pays to listen what your cast and crew are telling you. The only problem was… if we did that all the other voices would be audible on the sound recording.

The solution was staring us in the face… earplugs! We finally decided to record the whole thing while the actors were zooming in real time. You would not see or hear any of this. All you would see was what the actors were recording on their own phones. Thanks to the earplugs, the audience would only hear what each actor was saying as they recorded their own voice.

Now all we had to do was shoot it. 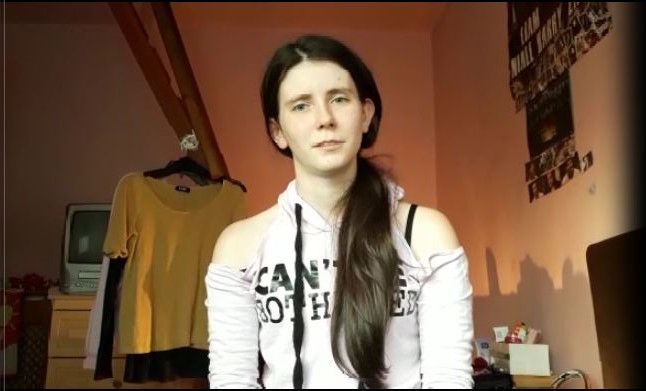 Over a mammoth Zoom session we recorded each actor saying their dialogue. As usual, everything that could possibly go wrong went wrong, expect (miraculously) for Zoom itself, which worked beautifully. This was the start of lockdown, so I think that worked in our favour. Not many people had yet cottoned on to the idea of using Zoom. These days I think it would be a lot harder due to bandwidth issues.

So after an exhausting 10-hour Zoom video session, where I think my co-producer aged at least five extra years, we had our film in the can, so to speak.

I sent the footage to our long-suffering editor. This was not easy, because again this was during lockdown so everything had to be sent electronically. I tried to explain what we wanted. Amazingly, he understood. Our editor has a fantastic sense of timing, so he managed to assemble the footage so that it looked like everyone was on zoom at the same time – even though each part had been recorded separately.

It was no mean feat. Some moments had to be sped up or slowed down so people hit their cues on time. It required some fine tuning to make it work. But after a few weeks, we had our finished film!

Now we just had to sell it.

Should this be Act Six? I don’t know. Anyway, we got our film done, during probably the most difficult domestic situation that we will ever face. Reaction so far has been very positive. Yes, there’s this little film that’s out there called “The Host”, but I’m sure nothing will come of it. Even if it does, we’re pretty confident our film is different enough.

Again, indie filmmaking has taught me that you don’t need a ton of money to make a film. You need resourcefulness and creativity. You have to refuse to let a problem stop you. There’s always a solution if you just look hard enough, even if it means tweaking the script to fit what you have to work with.

Casting is just as important. We had some amazing actors who really sold the story. We were also very lucky because all our actors were good sports and went along with this crazy situation.

Honestly, I hope I never have to direct a film via Zoom again. But if we do, I know we can do it with imagination, a refusal to let problems get you down, and passion! 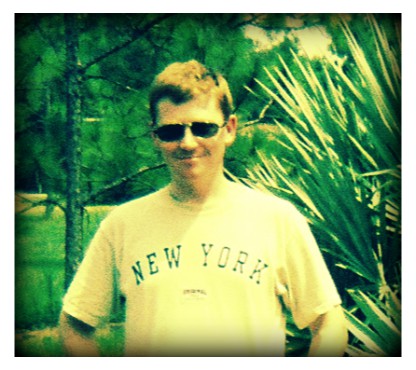 Eric Ian Steele is the writer of the thriller feature film “The Student” (2017), currently on Netflix in the USA, and the sci-fi action feature film "Clone Hunter" (2012). He has written for a children’s sci-fi TV show in the UK and was hired to adapt several cult novels for the screen. He is also a published novelist. He has just finished directing a vampire feature film which he also wrote that is set in the world of social care in his home town of Manchester, England, titled “Boy #5”. 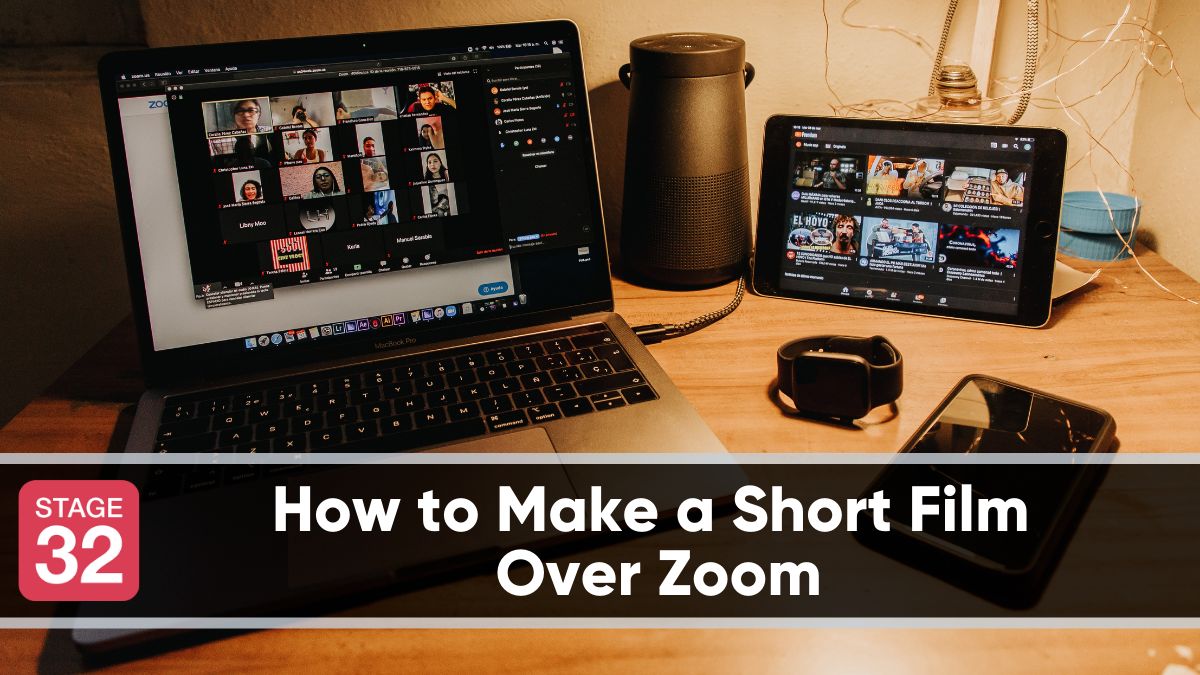