Happy Holidays Stage 32 Family! We are wrapping up this year and I want to take this week and next week to look back at some of our biggest success stories of 2019. To give you an idea of the overall successes our members have enjoyed, keep in mind that there have been over 315 connections made between screenwriters and filmmakers community and industry professionals in the Stage 32 this year alone! That means over 315 opportunities for creatives all over the world to take the next big leap in their career as a result of the platform! That’s huge!

While Stage 32 allowed for the facilitation of these for connections, it is the talent of our members that allowed the connections to result in some of the greatest successes we have seen. There are just too many highlights to share in one post, so this week we will focus on the early part of this year up through June. Next week, we will dive into Summer 2019 up through December. Now, let’s take a stroll down memory lane and revisit our biggest successes from 2019!

To kick off January 2019, we announced the winner of our 3rd Annual Comedy Contest winner Diana Wright who signed with literary manager Audrey Knox at The Cartel. Through connections made through Stage 32 Diana also met with the President of St. Amos Productions, Bret Slater, development executive Sarah Cornelius at Whitewater Films, Heather Johns, the VP at Lionsgate's LOL Network, manager Spencer Robinson with Art/Work Entertainment, the EVP of Development for Michael Shamberg's company, Ameet Shukla and Jared Iacino with Panay Films.

In February we shared the story of Stage 32 member Aaron Benjamin, who signed with veteran literary manager Jon Hersh at Housefire Management. Aaron participated in a Stage 32 pitch session with Jon to receive feedback on the pitch for his feature project, The Bastard of Robert E. Lee, which was previously a quarterfinalist in the 3rd Annual Stage 32 Feature Screenwriting Competition. But the connection resulted in a lot more than Aaron was expecting.

“Since signing Aaron, his two spec features - Maverick and Saturday Night Massacre - have been championed by major production companies and sent to dozens of studio buyers,” Jon further explained. “He now has fans all over town, and has been focusing on pitches for studio writing assignments,”

Aaron continued, “I'm currently pitching a bunch of projects to folks I met with, and working on another spec on young Abe Lincoln who was an ass kicking wrestler on the frontier before he started his legal career.”

And according to Jon, who has also spent time at CAA and Broadgreen, “The Stage 32 pitch session is screenwriting democracy at its finest.”

In March, Stage 32 member Julie Ann Cross was announced as the Grand Prize Winner of the Gidden Media & Stage 32 Romantic Comedy Contest. Julie received a $7,500 option agreement on her project, Vagic, and went into a development incubator led by Amy Baer (My Best Friend's Wedding, Something's Gotta Give), Chris Ceccotti and Sissy Denkova from the Gidden Media development team.

As Amy Baer said, "Julie has written an R-rated, laugh-out-loud, feminist romantic comedy in which the heroine learns to "own" her power - romantically, professionally... and sexually! It's a very surprising premise and a fresh, modern spin on the romcom genre. Stage 32's very own Amanda Toney and Nick Assunto did an incredible job setting up the contest. Also, shout out to Rachel Kempf for her script DIRTY WORDS, which we have awarded 'Special Distinction for Emerging Voice.' It's a unique and entertaining script that has a dry, incisive tone and an edgy wit. Congrats Julie & Rachel, and thank you to everyone who participated."

In April, I was happy to relay the story of a writer I know personally, Michael Lederer all the way from Berlin, Germany. Michael grew up in Palo Alto and NYC, has lived in seven countries, and now makes his home in Berlin. Michael has had four books published but admits he is fairly new to screenwriting, having written three feature scripts. Michael wrote to us and said, “Just want to go on record saying how helpful, knowledgeable, and kind (Stage 32 executive) Miguel Valenti was!”

Michael continued, “I’ve had such positive experiences recently through Stage 32,” adding, “Berlin feels less far away thanks to you guys.”

That means so much to us, because that is what Stage 32 is all about; we always emphasize that relationships are a cornerstone of the business and we want members to feel closely connected no matter where they are in the world.

Michael also won the PAGE Award for his project SAVING AMERICA! But Michael’s story doesn’t stop there. Michael is now writing for a major Broadway producer who has won over 20 Tony awards for Broadway shows! Amazing, Michael! Keep up posted!

And speaking of writers from abroad who are experiencing success Stateside, in May our success story came from screenwriter and Stage 32 member, Teng Ky-Gan of Kuala Lumpur, Malaysia. Teng is an incredibly talented screenwriter who writes Asian-themed stories in English. To date, he has written 5 musicals, 5 plays, and 2 short films. He has also placed very well in a number of screenwriting competitions.

One of Teng’s projects titled, Swept Away, caught the eye of Tiffany Boyle at Ramo Law in Los Angeles. The story centers on a young boy who teams up with a single-mother dive instructor, after their loved ones are swept away in a tsunami, so they can both begin the insurmountable task of scouring the ocean to find the bodies of those they have lost.

“Once [Tiffany] felt confident that the script was good enough, she pitched it around,” Teng told me. And because of their hard work and tenacity, the reception was fantastic!

“She attached 2 directors and a producer after a couple of months. I signed the option for the script in Dec 2018! Stage 32 rocks! I'm from Malaysia, light years away from LA, so to get a script optioned like this is a miracle,” Teng said.

In June, I was really excited to announce that Christina Pamies - the Grand Prize Winner of our 5th Annual New Blood Contest - was signed by Jake Wagner the head of Lit Management at a leading management & production company Good Fear, through Stage 32. She has since met with uber-producers Chris Bender and Jake Weiner who are working with her to develop her winning project! Christina continues to work with Jake Wagner developing projects!

Man, what an awesome first half of the year! We saw writers getting signed, writers getting optioned, writers getting paid writing jobs! Come back next week and we will check out the best stories from the Summer, Fall and Winter of 2019! It will be the last Monday blog of 2019 and the decade and it's going to give you the rocket fuel to launch into 2020!

In the meantime, keep up the hard work, keep writing, and keep supporting each other! 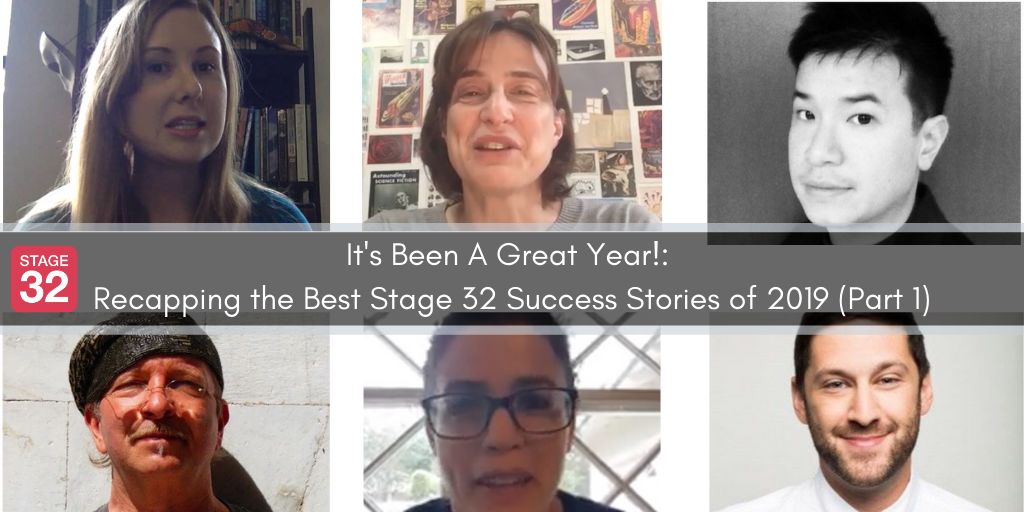