A special announcement to our Stage 32 members in and around the LA area. Stage 32 member, director David Rountree, will be premiering his film, CUT! at the Arena Cinema in Hollywood (next to the Egyptian Theater) this Sunday, February 15, 2015, followed by a live Q&A panel with Rountree, Stage 32 Founder/CEO Richard "RB" Botto, David Banks, Chriss Horgan and Matt Chassin. Immediately following will be a very special Stage 32 member meetup at the world famous Pig 'n Whistle on Hollywood Blvd.

David used over 30 Stage 32 members to round out his cast and crew on CUT! which speaks to the true power of Stage 32 for finding talent.  We thank David for his friendship and loyalty to the network.

For our Stage 32 members who do not live in the LA area, fret not!   We have some really exciting news for you regarding how you can view CUT! that we will be announcing soon!  Stay tuned to the blog next week to find out more! 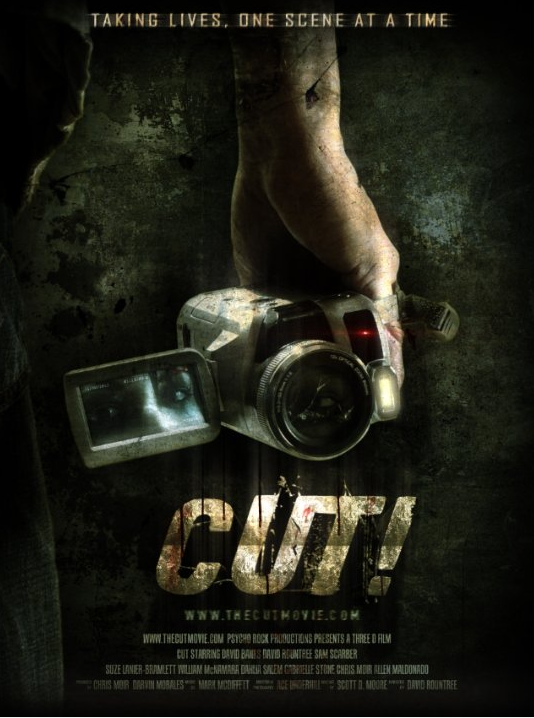 COME SEE WHAT OUR STAGE 32 MEMBERS CAN DO WITH A LITTLE HEART AND DETERMINATION - WHILE NETWORKING WITH EACH OTHER.

We are pleased to announce the Sunday, February 15th, Stage 32 Meet-up/ Mixer for Los Angeles. The Meet-Up will be accompanied by a screening and Q&A for the thriller film CUT!, which was made by over THIRTY Stage 32 members. ALSO JOINING THE Q&A will be Stage 32 Founder Richard “RB” Botto. Although much more of a smart psychological thriller, CUT! was voted as one of the TOP 5 Horror Films of 2014.

****Movie tickets for this event will be at a discounted rate of only $10 for all Stage 32 members. To guarantee a spot, you should get your ticket online (use promo code: STAGE32), however, you may be able to purchase at the door provided they are still available.

Get your $10 discounted ticket online at:

CUT! , directed by David Rountree, who was recently named by The Hollywood Reporter as one of the Top 10 Hollywood Directors under 40, welcomes everyone to bring an acting headshot/resume or crew resume to the Q&A. Rountree is set to direct 3 projects over the next 3 years, including Garrett Manor this March in Louisiana and the $25 million dollar fantasy film Evangeline, which is the first of 3 films in a new book series out of Norway.

CUT! opens in theaters and VOD everywhere this month.

CUT!, a twisted, psychological thriller, which won BEST FILM, BEST DIRECTOR (David Rountree), BEST LEADING ACTOR (David Banks), and the AWARD of MERIT for AUDIO (Solange S. Schwalbe and Chriss Horgan) at the 2014 Independent Film and Television Festival was named by Movie Rankings as one of the TOP 5 HORROR MOVIES of 2014.

In CUT!, the apparent is never the truth as an ex-con and aspirant filmmaker set out to manufacture a film by scaring people for real; however, when it goes too far and someone actually dies, the pair decide that killing for real on film is the only way to make a truly terrifying movie.

“CUT! has all the makings of an instant classic.”  James Wood - AXS.com