It’s that time again! Time for the July 2015 edition of On Stage with RB. Every month our Founder & CEO, RB, in a webinar setting brings on special guests who work in the industry, such as literary managers and development executives to offer advice to our community, and he goes over the best way to use Stage 32 to help your career. Afterwards, he opens up the floor to you for a live Q&A session about anything and everything in the industry. Best of all, this is FREE, exclusively for Stage 32 members. 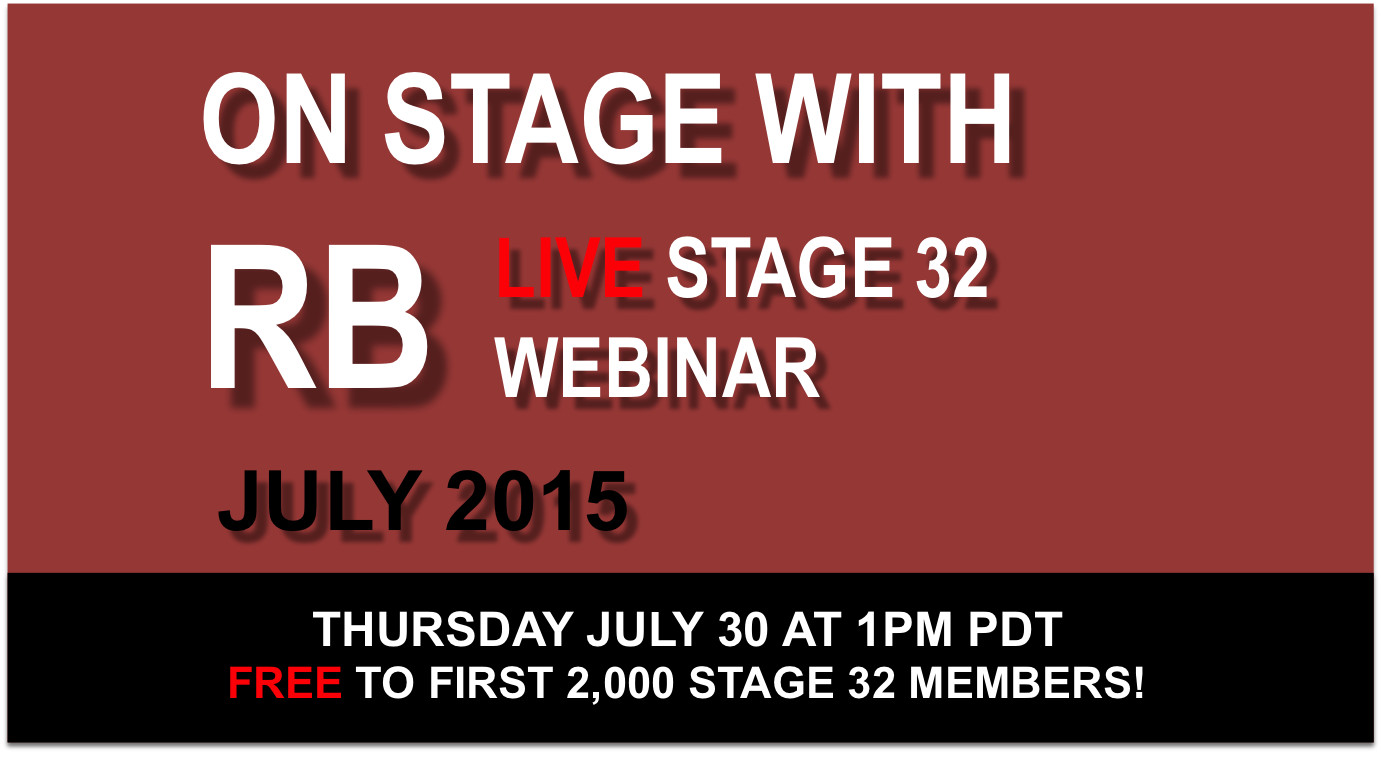 Last month's On Stage With RB broadcast was a 3-hour affair and we had on special guests Timothy Andrew Edwards who is one of the most diverse and accomplished Composers and Music Supervisors working in entertainment today with over 75 credits in Feature Film and Network Television, including two Emmy award-winning shows. We also had on Steve Desmond, a Professional Screenwriter and Filmmakerwho has written or developed projects with Imagine Entertainment, Level 1 Entertainment, The Walt Becker Company, DreamWorks Animation, and The Disney Channel.Herecently raised $30k on Kickstarter for a short film he directed from an initial raise of $16k.

Joining RB is Jen Grisanti, a former studio executive, Story/Career Consultant and Writing Instructor for Writers on the Verge at NBC, blogger for The Huffington Post and author of Story Line: Finding Gold In Your Life Story, TV Writing Tool Kit: How To Write a Script That Sells, and Change Your Story, Change Your Life. Jen was mentored by Aaron Spelling, one of the greatest executives and most prolific producers in the business, She learned early on how to develop a story and make a script the best it could be before it hit the air. She worked with the executive producers, showrunners and staff of over 15 primetime shows and had the unique opportunity to give script notes on a daily basis and see them implemented weekly on shows like 90210, Melrose Place, Charmed, Medium, Numbers, NCIS, The 4400 and Girlfriends. As a three-year mentor in the CBS/Diversity Program and a panelist for the WGA and DGA, she helped other creative talents see the business through the eyes of an executive.

We are inviting 2,000 Stage 32 members to join us LIVE Thursday, July 30 at 1pm PDT for the On Stage with RB online broadcast. RB will be covering some of the latest and greatest site features, speaking to members of the community and spending at least 90 minutes answering questions about the industry, your chosen discipline and just about anything else that's on your mind. If you cannot make it live, don't worry, you'll still be able to see the webinar for free On Demand in our EDUCATION section. To see all On Stage With RB webinars for FREE, please click here.