Posted 1 year ago by Martin Reese 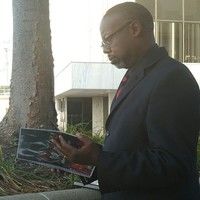 Good morning, Stage 32 Creative Crew! From the day it was announced on Deadline Hollywood that Stage 32 had partnered with Trick Candle Productions and Glass House Distribution to launch the Microbudget Horror Script Competition, this day has been months in the making!

In reality, as "RB" Botto stated in the blog he wrote to announce the competition, 'this opportunity all started...at the American Film Market (AFM) [in 2019] when Tom Malloy and Michelle Alexandria of Trick Candle Productions and Glass House Distribution sat with Stage 32 Managing Director, Amanda Toney, and I to discuss the idea of creating yet another incubator program to bring to the platform."

The competition received a record-shattering number of submissions from around the world and the judging process was long and arduous. Now, we're excited to bring you the story of the contest's winner - Martin Reese of Cleveland, Ohio - and his project THE EYE OF OWUO!

Martin is the embodiment of the combination of character traits it takes to be successful as a screenwriter. He is imaginative, hardworking, humble, and above all, supportive and encouraging to his peers. I have had the great pleasure of working with Martin one-on-one through the Stage 32 Writers' Room and have consistently been impressed by his willingness to share his ideas, take notes, and do the work.

When I first heard the logline for THE EYE OF OWUO, I gave Martin what could be the best compliment a screenwriter can receive, "That's a movie." It means that I instantly saw the "big idea" and I knew that if Martin was able to pull of the execution of the concept in the storytelling, he would have a fantastic project.

Martin will now receive a $5,000 option for his script and to have that script become eligible for a $100,000 production! If the film is made, Glass House Distribution will handle worldwide distribution for the film. Martin will also enter into development with the project's producers, "RB" Botto, Stage 32 Managing Director, Amanda Toney, the CEO of Glass House and Trick Candle Tom Malloy, and the Head of International Sales of Glasshouse and Trick Candle Michelle Alexandria!

From the entire team at Stage 32, thank you to Tom and Michelle for being incredible partners and a BIG CONGRATULATIONS to Martin!

THE EYE OF OWOU is based on the West African tale of how death entered the world. The logline is “A desperate mother uses ancient African magic to resurrect her daughter, then realizes the price for keeping her daughter alive entails taking the lives of others.” The logline won a logline contest in 2014 which led me to believe the idea, at least, had potential.

I’ve always enjoyed reading mythology. Most horror films are based on Eurocentric myths. I decided to take a different route and explore African mythology. I discovered the story of Owuo and how death entered the world. I combined concepts from this myth with the concept of how far some parents will go to protect their children. This led to the question “What would you sacrifice for your child?” then to “Who would you sacrifice for your child?” What if someone could save their child, but it meant someone has to die in their stead? I wondered what that moral dilemma would look like and what would be the consequences? How would that person justify their actions?

I started working on the script. As a member of Stage 32 and the Writer’s Room I participated in the practice pitch sessions for feedback. I took a couple of Stage 32 webinars on pitching. After a few drafts I decided it was time to start getting feedback through Stage 32’s Script Coverage. I proceeded with a step-by-step process. First, I did the First 10 Pages Script Coverage. This was my check to make sure my story was on the right path. I received a Consider for both Writer and Project which was encouraging. I made a few changes based on the notes I received. Next, I submitted the script for Script Coverage from an Industry Reader in order to get an evaluation of how my script was working as a whole. Once again, I received a Consider for both Writer and Project. The notes were extremely helpful. I added many of the changes the notes suggested and then submitted for Feature Script Premium Coverage from an Executive. I received Consider for both Writer and Project and more notes.

Martin Reese learns he is the WINNER of the Microbudget Horror Script Contest!

My next step was to pitch the script to executives through Stage 32’s Pitch Sessions. I submitted several written pitches and did a Skype pitch. In order to prep for the Skype pitch, I recorded myself and timed it. You only get 8 minutes to pitch and they recommend you leave 2 minutes for questions, so you really only have 6 minutes to pitch your project. I ran through it over and over again until I was fluent with the pitch and it was within the 6 minutes. The Skype pitch resulted in a script request. One of my written pitches resulted in a script request, but it wasn’t all roses. A number of my written pitches resulted in passes for both writer and project, though I did receive some helpful comments. One of the script requests resulted in good comments, but no meeting request. The lesson here is don’t get discouraged, just keep working. A pass on your script is just part of the journey to a request or something more.

My decision to enter the Microbudget Horror Script Competition was based on notes I had received through the feature script premium coverage. One of the notes suggested that my script might work as a microbudget film. Without that note I might not have considered my script to be a fit for the competition. Once I entered the competition, I told friends that I would be happy just to make the Quarterfinals. I honestly never expected to win. When I found out that I had won I was thrilled. I never could have done it without the support of Stage 32 and the Writer’s Room led by Jason Mirch. I’m giving a special shoutout to Nick Assunto and Allen Roughton who were there in the early days of The Writer’s Room and kept me encouraged and engaged. I would be remiss if I didn’t recognize my wife Stephanie for her support and her help as a beta reader. She provided me with feedback regarding the development of my female protagonist.

It should be noted that I live in Cleveland, Ohio. Some say that you have live in LA to succeed, but in today’s world that’s not always true. Technology has made it a much smaller world. I’ve been able to meet fellow creatives from as far away as Norway and Trinidad through Stage 32. As an example, I have a short horror film that I wrote and co-produced currently in post-production. It was shot in LA. I met and befriended the director through social media. Living outside of LA is no longer an obstacle.

In closing, it’s an honor to win the Microbudget Horror Script Competition. I’d like to thank Stage 32, Trick Candle Productions and Glass House Distribution. I salute all the talented writers who were able to place in this worldwide contest. I’m proof of what can happen if you utilize the resources available at Stage 32, participate by networking with fellow creatives, and never give up. 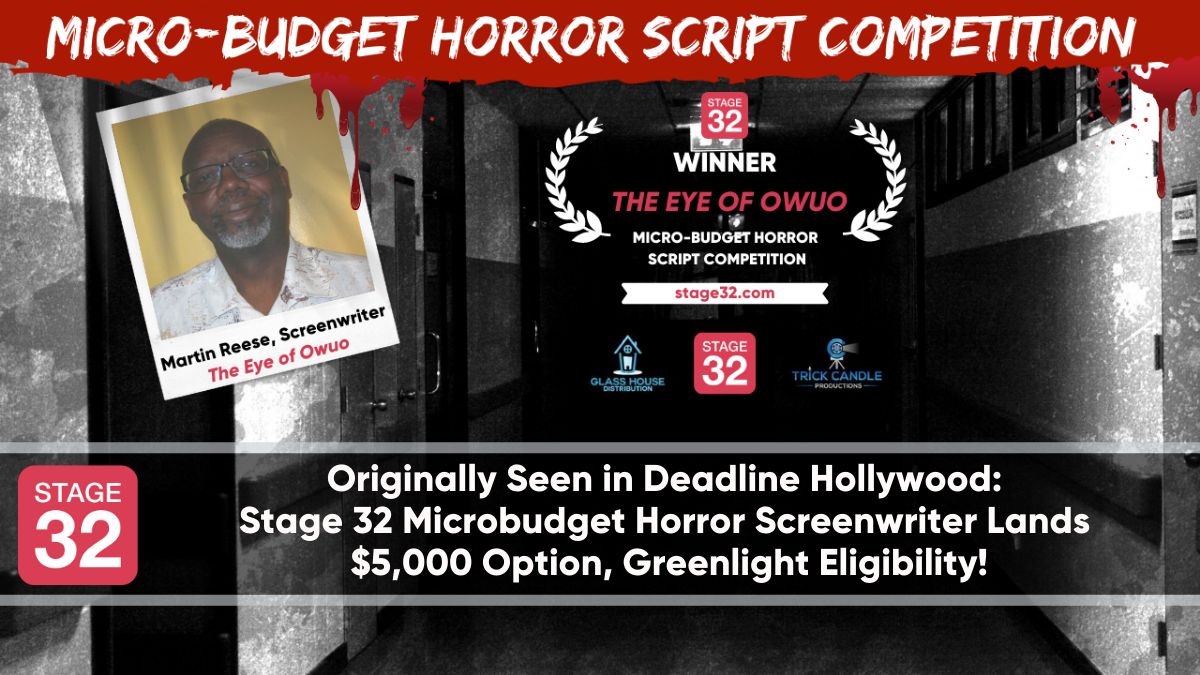