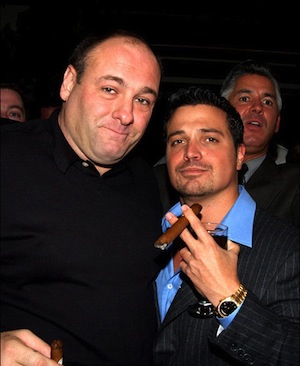 The first time I meet James Gandolfini, I’m bellied up at the bar of an Italian restaurant on New York’s Mulberry Street.  Steve Schirripa, who played Bobby “Bacala” Baccalieri on The Sopranos, and I have become good friends (we shared the same publicist), and we – meaning my magazine, RAZOR, and I – are throwing a book launching party for Steve’s latest book, A Goomba’s Guide to Life.

So, shutting down Mulberry Street seems like a perfect idea.  I mean, who will notice or care?  This is New York after all.  Turns out when the entire cast of The Sopranos shows up to Little Italy in support of one of their own, the answer is: The entire neighborhood.  Remember the opening of The Godfather?  The wedding?  All those Italians?  Like that.  But I digress.

Back to the bar.  The place is packed.  Even a sardine would have its patience tested.  I sip my cocktail and speak to the press agent for the party.  She’s a nervous wreck.   You see, at that point everyone who had promised to show - the cast, David Chase, other celebs and athletes - has arrived.  There’s only one person missing, Tony Soprano himself.   The press agent contemplates whether to jump off the building or run into traffic…In an effort to help, I remind her the street is closed off to traffic.

I feel a paw on my shoulder.  I turn to see Steve staring at me, perturbed.  Now I should mention, Steve is one of the funniest (and kindest) men on the planet, but he’s also one of the most sincere.  So, there’s some doubt as to whether he’s busting my chops when he says, “RB, there’s a guy here says you’re a hack, that your magazine ain’t worth the paper it’s printed on.  I told him to screw off, but he’s demandin’ to talk to you.”

I give Steve my best “Oh yeah?” look, then a nod indicating he should bring this ass forth before me.  With that, Steve steps to the side and standing before me, holding the latest issue of RAZOR, is James Gandolfini.  My jaw muscles don’t go slack, exactly…they kind of just melt down toward the floor.

“I hear you’re responsible for this,” he says, fluttering the magazine above his head.

I manage to blink.

“And I hear you’re responsible for this,” he says, waving around the room.

I attempt to say, as cool as possible, “Yeah”, and end up lightly spitting.

He nods, wraps a large arm around my shoulder, and pulls me into him.  “I respect you for this,” he says, lifting the magazine.  “Takes balls of steel in this environment, ya know?  You should be very proud.”

I hope my thundering heartbeat serves as a clear signal of my appreciation.

“And I admire you for this,” he says, looking out at the room.  “Steve tells me you’re a true friend, one of the good ones.  You should be proud of that as well.”

I manage a “Thank you, Mr. Gandolfini.”

He looks me straight in the eye.  “Jimmy.  My friends call me Jimmy.”

We spend the next twenty minutes discussing the magazine.  What he had said to me was no face music, the man was a fan of the content.  He speaks intelligently and thoughtfully on a piece that James Carville had written for us, and becomes passionate when discussing an article by sportswriter Mike Lupica which speaks to the demise of heroes in the sports world.  Later in the evening, and this would be a recurring topic through the years, we spend some time ranting and raving about our love, hate relationship with the New York Jets.  (I think 99.9% of those conversations begin with one of us saying, “Don’t get me started…”)

Since his passing, many whom were touched by Jimmy have mentioned that he was the antithesis of Tony Soprano.  That’s a fact.  Jimmy was shy, uncomfortable with the attention fame carried.  Understand, he never complained about it, and he wasn’t naïve about it, but he was a blue collar guy from a blue collar town.  It was something that never left him.  The teachers, the truck drivers, the union guys, where was their credit?  Fawn over them.  Shake their hands.

He even took a blue collar approach to acting.  Those who worked with him always spoke about his desire to be better, to dig deeper, to explore further, to push the line to its furthest point.  As an artist, he was never satisfied.  There was always another level to be discovered.

But as a person living in the day to day, especially when he was in his comfort zone, he was no different from you and I.  One day I had the opportunity to play blackjack in Vegas with Jimmy and some of the guys from The Sopranos cast.  Jimmy was learning on the fly.  At one point, he moved to pull a card on a high bust hand for the house – something like a 16 with the dealer showing a 6.  Everyone at the table jumped down his throat.  Even the dealer paused.  Steve, ever the ball buster, said, “Jesus, Jimmy.  Could you get your shit together?  You’re supposed to be Tony Soprano.  You’re pulling back the curtain.  Stop embarrassing us, huh?”  Everyone got a good laugh.  And Jimmy gave it right back – I can’t write what he said, but he hit the target dead center.  Just one of the guys, having a blast. 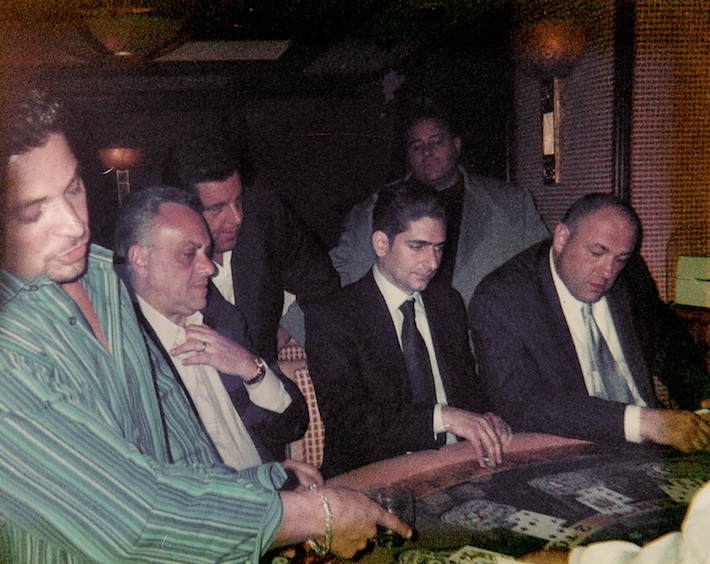 Enough has been said about Jimmy’s groundbreaking performance as Tony Soprano – and make no mistake, it was groundbreaking, for there would be no Walter White, no Don Draper, no Nicholas Brody, no Francis Underwood without Tony Soprano – but I’d like to focus on a more recent role, that of Secretary of Defense, Leon Panetta, in Katherine Bigelow’s Zero Dark Thirty.

When Jimmy first appeared on the screen, I couldn’t help but smile.  A few memories flooded into my conscious.  But they quickly slipped away.  And I found myself immersed in the performance, instantly lost back into the world of the story.

Because that’s what great actors do, they take you out of your space and time and draw you into theirs.  And Jimmy was one of the all time greats.

About ten of us are sitting in a lounge one evening when a man approaches in that way most fans do when within proximity to a star – a stutter step here, a shuffle there.  Jimmy spots him, and now the man is forced to make his move.

“Do you mind if I ask you a question?” he asks Jimmy.

“My son wants to be an actor.  What piece of advice would you give him?”

“He never talks about fame.”

“And what do you think?”

The man tilts his hand up and down as if to say, I’m not so sure.  Jimmy contemplates for a moment.  “Well, I have two pieces of advice then…”

“Two, tell him not to listen to you.”

We all erupt with laughter.  The man is doubled over.  Finally, he offers his hand.

“Thank you so much, Mr. Gandolfini.” 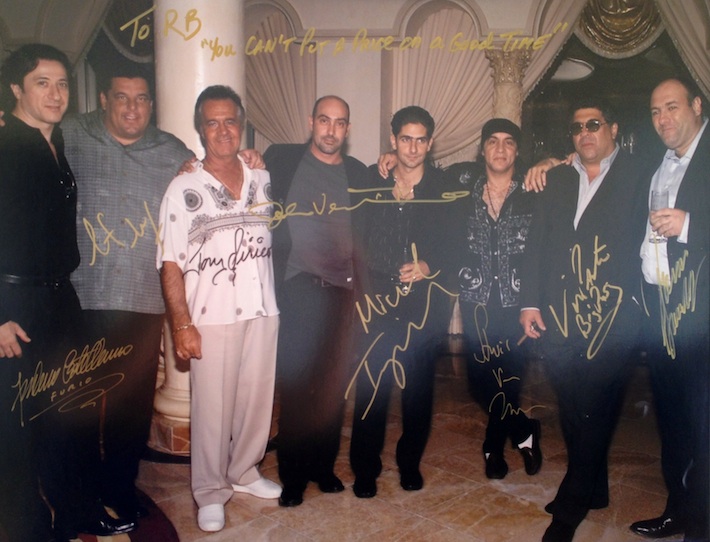 A gift from The Sopranos cast.