Posted 6 years ago by David Andrade 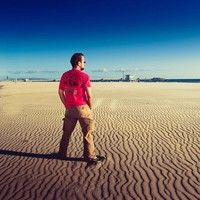 As an artist and storyteller, I know all too well the struggles of making art. Your very first sketch is met with resounding confirmation: "I am wasting my time." Eventually that's partnered with "I am not good enough." If you somehow survive this double onslaught of internal doubt, you will meet the most vicious internal critic of them all:

Let me tell you a story.

A little over three years ago one of the lowest points in my life occurred. I was laid off. The bankruptcy of my employer (coming off an Academy Award win in Visual Effects) sent ripples through the industry. We were faced with no options other than abandon our families and move abroad - no easy task for anyone.

I went in a different direction and started a studio. I had no idea what I was doing. I didn't know what cash flow was, or what the difference between W-7 and W-9 was. I just wanted to tell great stories, make great entertainment and do something about this mess I found myself in.

Have you ever told your family you're going to join the circus?

That's what those first six months of my life were like. Boundless enthusiasm was quickly defeated by consternating paperwork. Forms, taxes, lawyers and just trying to raise financing for a project seemed to be the only thing that I did. Wait, I am an artist! Where's the script? Why are we looking at Excel so much, where's my Adobe Suite? What's cashflow again?

When you hit this point and trust me we all do, there’s only one way out  —  through. You must get back to work. It’s a grueling, painful process, doing the same thing over and over, hoping for a different result. Most people tell you you're insane.

Yet, as artists, that is exactly what we have to do. You must practice your craft over and over again, because every drawing, every line, counts towards your continued growth as an artist. As a business, every form, connection and dot, matters. We learn the art of negotiation, your worth as an artist and learn determination to win.

Take a look Walt Disney’s drawings for his early Alice Comedies shorts. They were awfully crude and simple, the animation hampered by a poor budget, little time and novice technical ability. Nonetheless, these drawings grew Walt’s first studio, Laugh-o-Grams, into a business.

These very crude early drawings some of the most beautiful, enchanting animation the world has ever seen.

A business that failed. A business that left him broke, eating from trash cans and penniless in Kansas. Yet, through sheer determination, or madness, he moved to Los Angeles and slowly began anew. Walt gained a partner in business, his brother and redoubled his efforts on art education. CalArts owes their heritage to his pioneering spirit to be a better artist.

A world without The Walt Disney Company is practically unimaginable. Yet it was nothing more than Walt’s determination, his desire to go through those challenges and willingness to keep learning that ensured his legacy would still be standing today.

Drawn by Milt Kahl, one of Walt’s best animators.

Even At Your Best, You Can Still Fail.

The earliest short films George Lucas directed were crude-yet-bold experimental attempts at storytelling. Following no distinct pattern, Electronic Labyrinth THX 1138 gave us a mish-mash post-apocalyptic dystopian future dominated by an oppressor. To make the short film, Lucas leveraged his professorship, employing his students, filming in parking lots and using a camera that is put to shame by even the worst of smartphone cameras today. Completed painfully over 12 weeks, THX 1138 became George Lucas’ calling card.

This short film would go on to win accolades and would even be turned into a full-length feature film. With this milestone, Lucas knew he had made it. Success was all around him! He was one of the graduates that 'made it.' Until the film was widely released and it bombed at the box office, this sent Lucas in a bit of a tailspin.

Rejected, dejected and broke, Lucas moved to San Francisco to begin anew. Rather than starting a new career, he started a collaboration with his friend, Francis Ford Coppola and took on directing a film that touched on his car-racing roots -American Graffiti. A smash at the box-office, American Graffiti’s success paved the way for another film — Star Wars — a few years later. Did you know Lucas suffered a heart attack during the grueling struggle of the original Star Wars?

THX 1138 may have been a commercial failure, but it would pave the way for another sci-fi success.

Making Magic Is No Easy Task.

My point is that in the midst of all these failures, glories and tribulations, one thing stands clear. All journeys are filled, even at the best of times, with the worst of circumstances. Your job is to keep going forward.

Fast forward years later, I do know, finally, what cash flow is! Our studio has worked on television, video games, produced an award-winning web series and is currently developing a virtual reality app. Yet even with these successes, every day I face the very real challenge of not winning pitches, clients not paying and the grim reality that even my best efforts could still land myself in bankruptcy.

As an artist, a storyteller and an animator, I cannot give up. Determination got us work on Fox’s ADHD. Pushing through challenges got us work on CBS’ The Good Wife. The daily pursuit of my craft freed me from the shackles of vicious internal critics and set me apart from all those who just dabbled and gave up. Heck, even posting on Stage32 made us a connection with a great musician who would become our lead composer. You just simply never know where success will lay.

Clovis is happy because his animation scene is finally done.

Nervous? Don’t worry, we all are. We're all making this up as we go along and there are certainly no secrets to empire building. Except for one: