The Surprising Secrets of the Success of a Viral Music Video

Posted 3 years ago by Mackenzie Kristjon 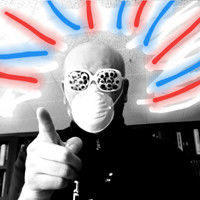 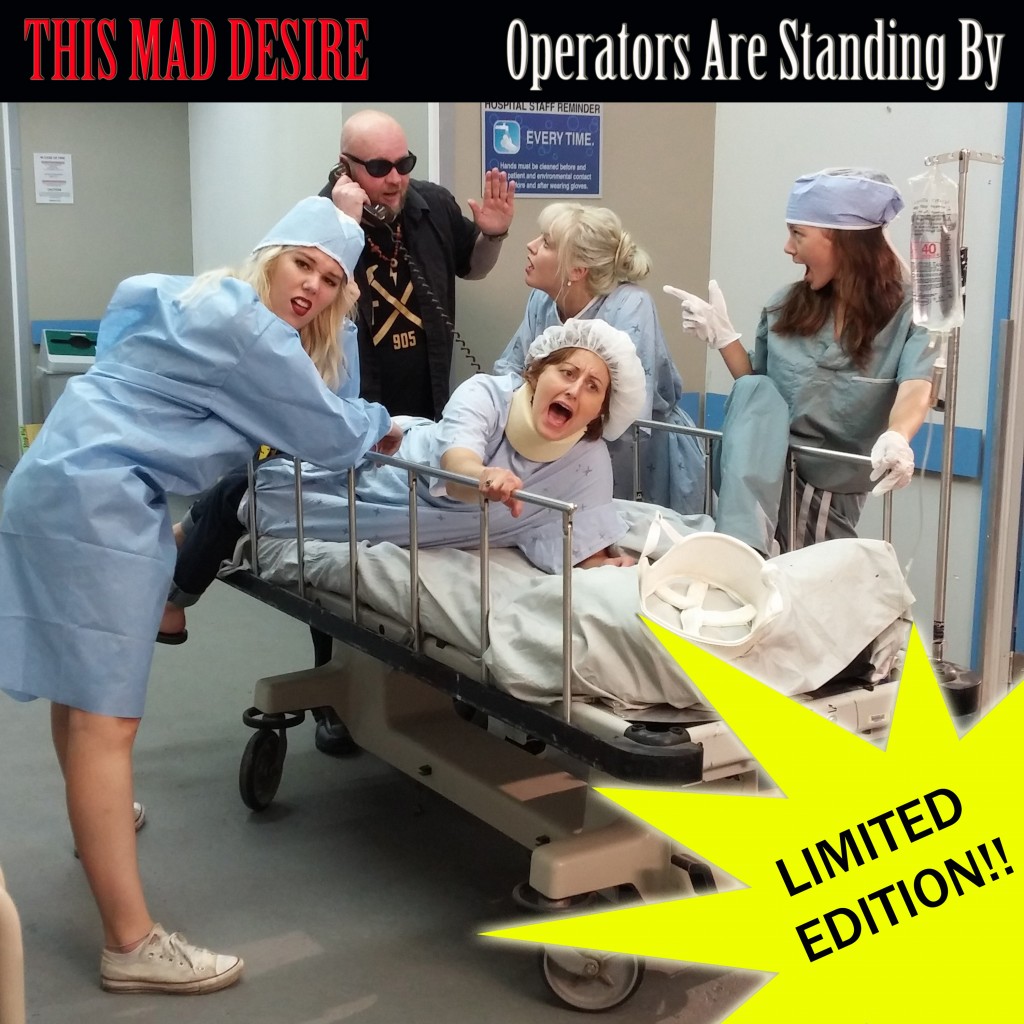 One of the greatest aspects of creative projects in any discipline is the synergy and surprising turns that occur in the process. You start with a vision and then one happy accident after another takes you down a rabbit hole to something far beyond expectation. This was exactly true of my re-entry into the music world with the video for my act This Mad Desire's Operators Are Standing By. To date, it has been viewed over 200,000 times on youtube, spawned two more videos, created occasions for me to perform in places as far-flung as Reykjavik, Iceland, and caused us to be on the cover of numerous magazines and newspapers in at least three different languages (of which I am aware).

Probably several times a day, strangers write me about these videos and how much fun they had watching them. While this is by no means on the same level as Jay-Z or Kanye, for an unsigned and unheard-of act, this has all been pretty inspiring.

Here I will describe some of the secrets of our success. 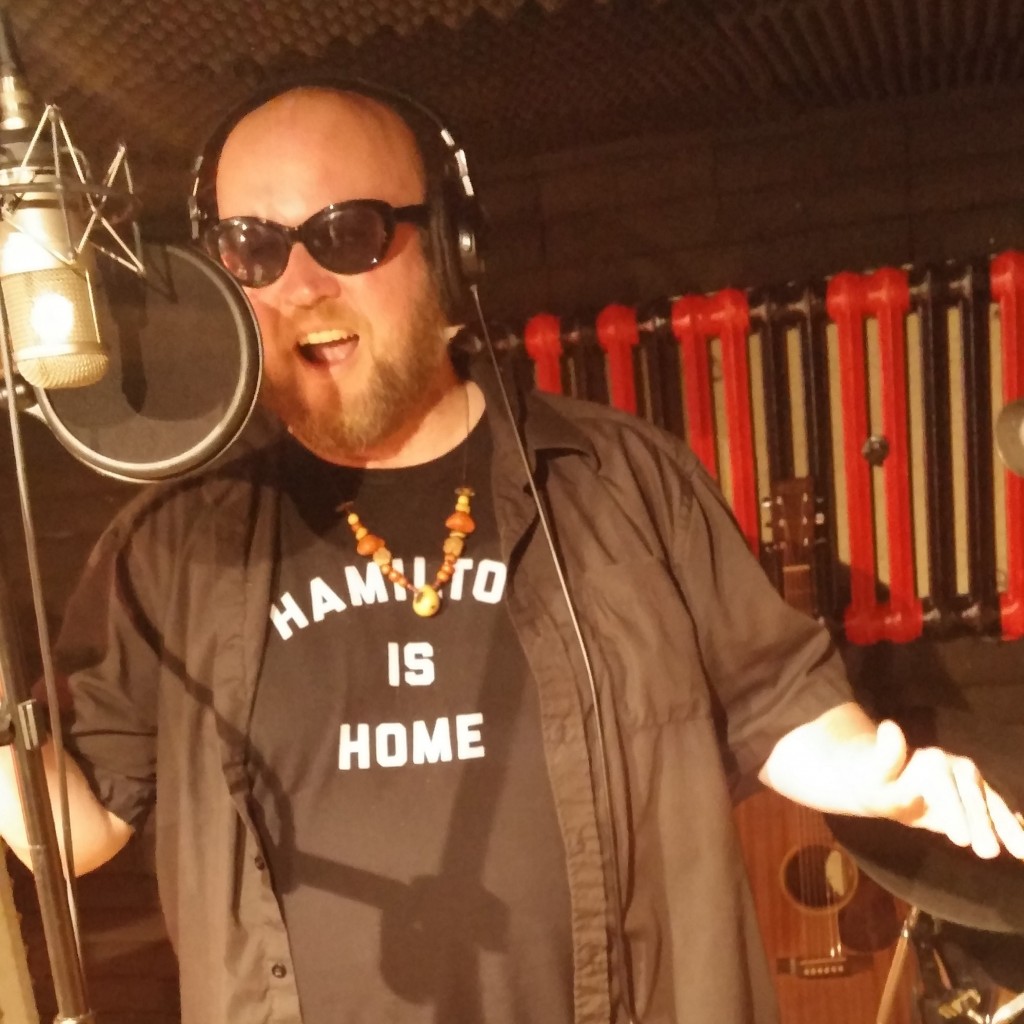 Sounds simple, right? As we are not focused on music here, I will only say that the song came to me in about as long as it takes to sing (and I do offer private lessons in songwriting both in person and online).

After a number of years not focused on music, I decided to give this song the royal treatment and opted to work with award-winning record producer Mark Zubek of Zedd Records in Toronto. Everyone tells me it reminds them of something different but my personal favourite was one day I had someone come up to me and say it reminded them of Supertramp and the very next person said, “Hey! I like this.... makes me think of Marilyn Manson!”

Actually someone on the Canadian Broadcasting Corporation compared it to the Sisters of Mercy -a band I'd never even heard before. And that's the great thing about art: when people find things you would never have foreseen in the work.

My initial instinct for making a video was this: I was aware that the Hamilton Public Library had a fully-functioning green-screen room with professional camera and lighting equipment (all available for free) and I knew a few actors as I had been doing background work in various film productions in southern Ontario.

I figured something would work out fairly economically.

Within about a day of having this thought, I attended a party where I met an actress/model who suggested I call this guy Simon to help out. I asked what was his last name? She said, “Simon Winterson.”

“No way!” I thought. “THAT guy??” I knew him as a fellow regular at a downtown bar where I had performed and attended with perhaps more regularity than I should admit. Even though I knew him, I had never known really anything about what he did for a living and the same went in reverse.

In life, you get nowhere if you don't take chances so I decided to call him up and ask for a meeting, thinking that I would see if we could get more of a “family and friends” rate than the big production companies to use one of his sets or maybe use some of his props.

Little did I suspect what was to transpire.

Let Others Contribute to Your Vision

Enter Simon Winterson. “I heard this song and instantly knew I wanted to direct it. I felt there were many opportunities to both make interesting social commentary as well as make some very fun and entertaining scenes.”

With Simon on board, the video was filmed at Simon's studio, Digital Canaries Sets and Studios, which is a sprawling, 66,000 sq. foot film studio in Hamilton, Ontario, with a large number of standing sets including a courthouse, the White House Oval Office, a jail, a hospital, some houses, and costumes galore!

Our second meeting was a casting call held downtown Hamilton at which I was introduced to my wardrobe manager and choreographer and all kinds of actors and models who seemed to pop out of nowhere for this little song I wrote about human connection. Frankly, I was amazed.

Everything Will Go Wrong & Sideways. Roll With it, Baby!

Things were coming together just as surely as they were falling apart. We had cast a number of people for significant roles in the video and two days before the shoot, our “Adam” character cancelled. Now I had an Eve with no Adam. What kind of Garden of Eden would that be? (Maybe an improvement. The jury's still out.)

As this person's main job was to lay in a bed pretending to have relations with Eve, I thought it should not be too hard to find a replacement. After all, this is the stuff of fantasy! A half an hour later, I was at an art reception and asked the first person I spoke to -who said yes! Problem solved. Alternatively, this is the web link for the video. 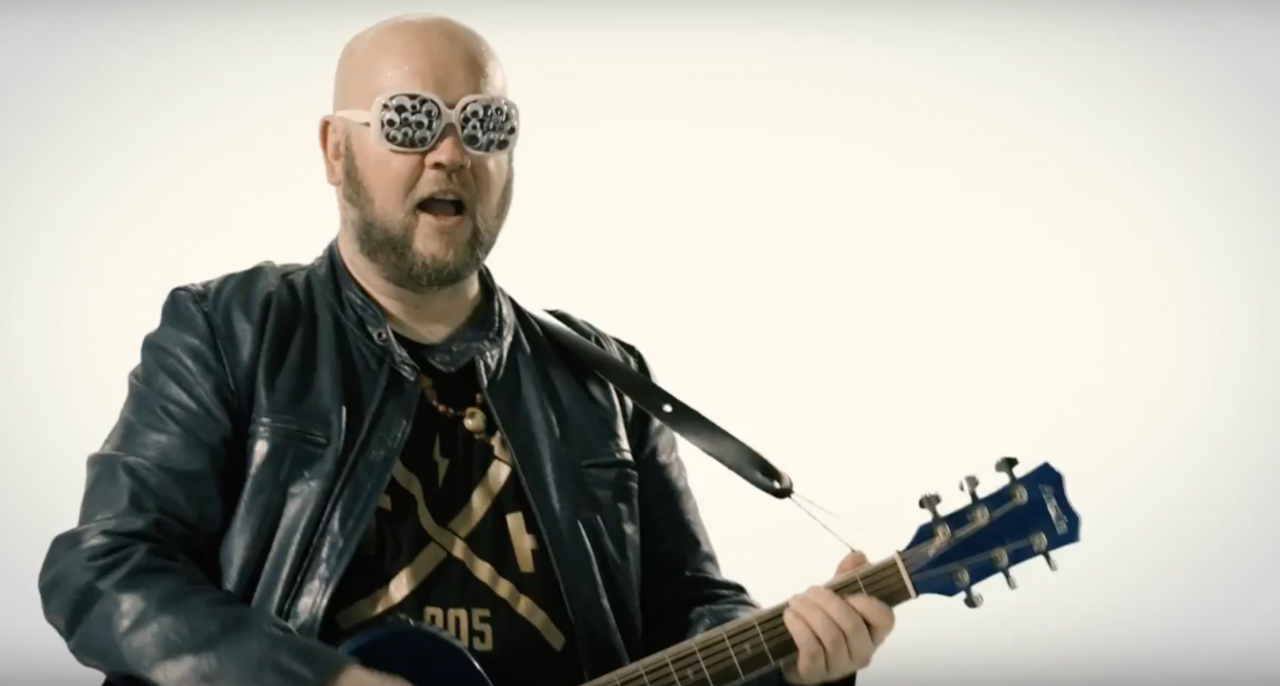 Mackenzie in the Operators video with the google-glasses made by Andrew McPhail.

Then the day of, I get a call from this actress who was supposed to have another important role and the dog ate her homework, her sister was sick, this, that, who knows. At this point, I was questioning my own sanity as everyone had a car breaking down or was lost en route to set and so on. I mentioned all this to Simon who was busy prepping sets and he shrugged this all off. “It will all work out.”

AND they had prepared a full dance routine that we all learned. They sang my own song to me and showed me the moves to the Operator Soul Plane -which really should have become a worldwide trend! 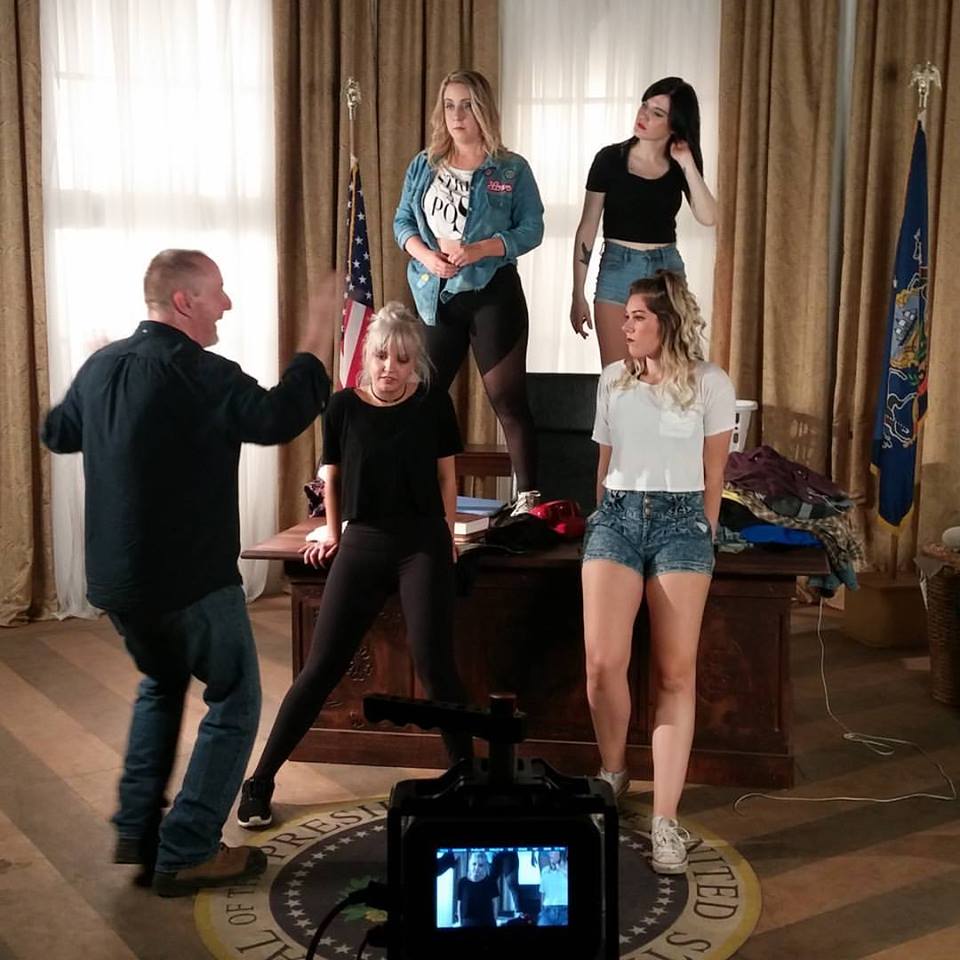 Director Simon Winterson directing the dancers in the Oval Office.

Treat Everyone Well & Make Things Fun for Everyone

We wound up with twenty actors and several professional dancers in all kinds of fun scenes. People were dressed as police, inmates, flight attendants, nurses, surgeons, and on and on. There was a genuine feeling of camaraderie on set as we learned our dance moves (the Operator Soul Plane) and improvised very funny scenes.

At various points, we had multiple sets filming at once and people kept showing up that were friends of friends or that had just heard about this. We used them all. At one point, we were filming a scene in which a surgeon reaches into the heart of the patient and pulls out an old phone that extends out with a cord that almost makes you think of intestines. The actress who dabs the surgeon's forehead was just someone on set that we threw in a costume. She had no idea what was going on and had not been prepped. She told me when she saw the phone come out of nowhere from the body, she almost exploded inside wanting to laugh.

Sometimes people ask if we storyboarded all this and the truth is there was some storyboarding and also a lot of improv based on the people that were actually there -who had a lot of fun. And were well fed. The fun and the feeding came in handy as we soon found out... 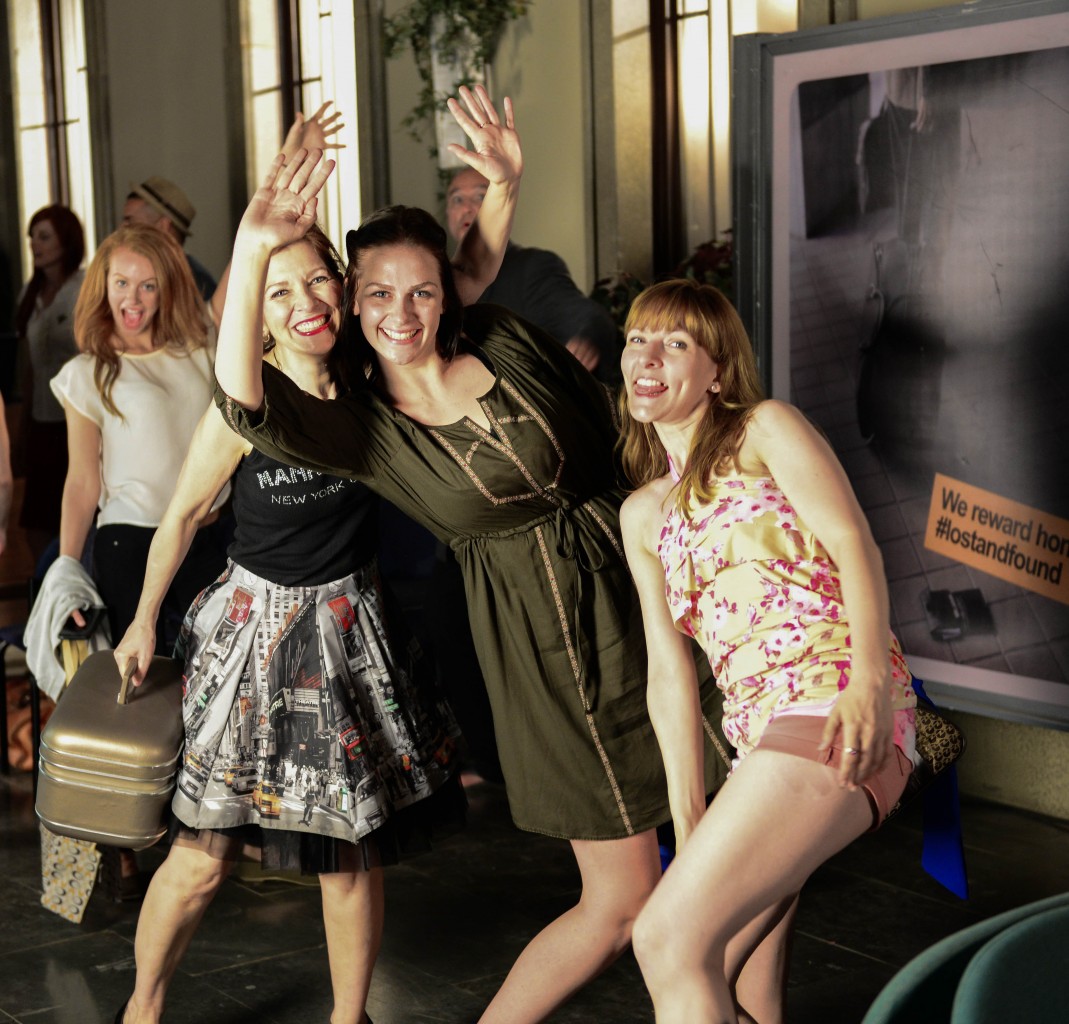 Some of the actors having too much fun on our airport set - which was created just for this video. Photo credit: Mike Skarvinko.

We had planned the shoot for a rare free Sunday when major network film companies were not booking Digital Canaries. As such, it became worrisome when we were not done filming at the end of the day. For continuity, we were going to need these people to all return on an upcoming Monday during the work week. Pretty much all of the talent were volunteers who work full-time so it was shocking to me that ALL of them booked off work to make it back.

Most of them told me it was because they were having such a great time and really believed in the madness of what we were doing.

Have an Innovative Launch

Finally, the video was unleashed to a very gratified audience at a coworking space downtown Hamilton that has nothing to do with music or film but has a neat look and volunteered the space.

When people walked in, they were bombarded with visuals. There was an 8-foot high display featuring the album cover in front of which was a hospital gurney. Simon handed out little hospital surgery hats for everyone at the party to wear. (This is actually where I got the idea for the amateur surgery business I'm launching in back alleys across America. Run for your lives!)

Next, the lights were dimmed and Simon introduced our enthralling video -which the crowd demanded to watch at least three or four times followed by a live show replete with trumpets, strings, glockenspiels, dancers, and comedy.

In many ways, the launch contributed to the almost immediate success of the video as several radio stations covered the event, it was written up in local media, and the many, many people involved in the production took to social media to create a genuine groundswell of interest. One person's aunt told me she felt she was responsible for at least 20,000 views on youtube. 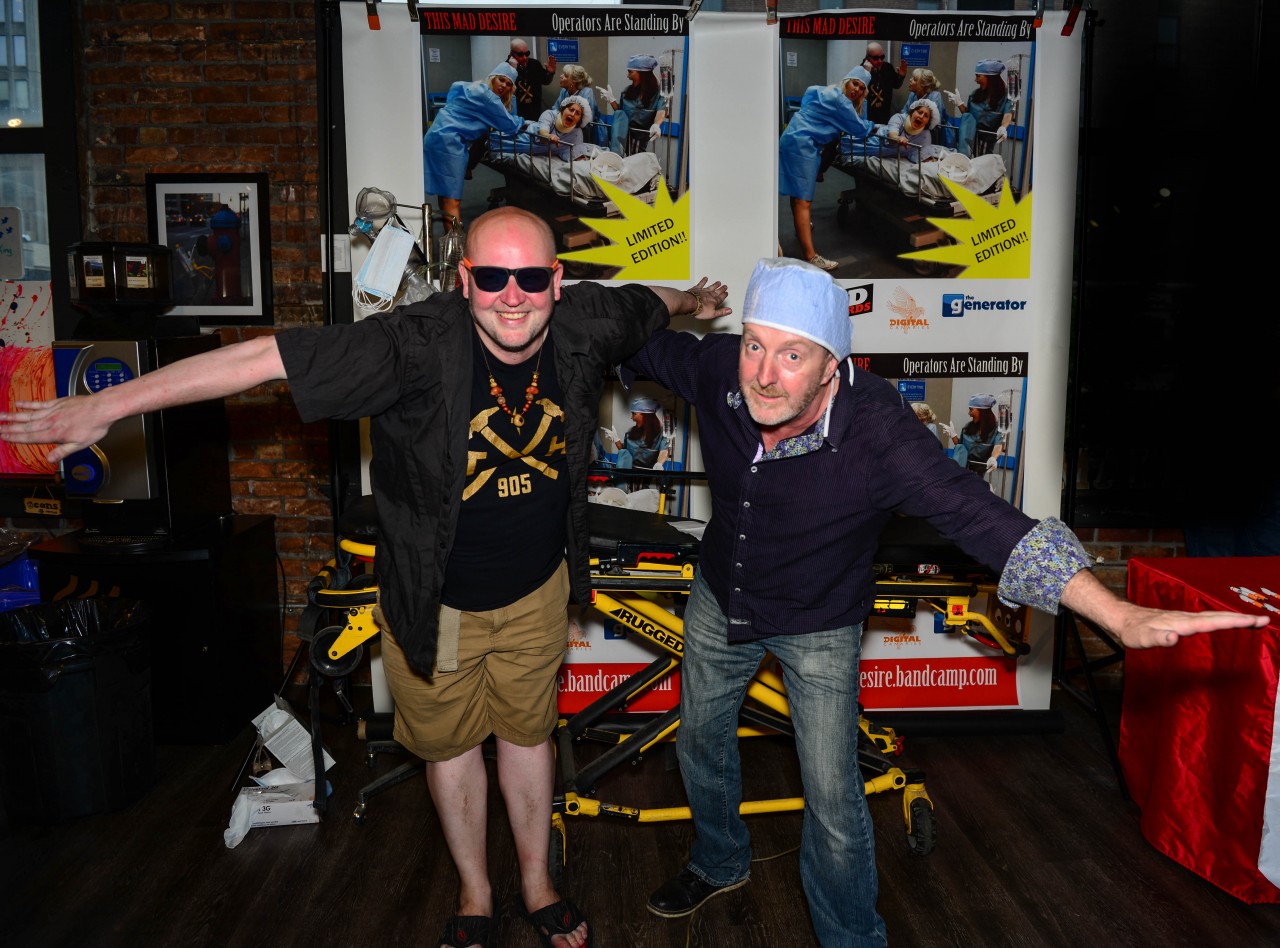 The moral of the story is to keep an open mind, meet quality people, and trust their creative spirit. This creative industry is genuinely nutty and great at the same time. The ability it has to lift the human spirit is unparalleled. And remember, if you need me for anything at all, Operators Are Standing By.

Other Stage 32 Posts by Mackenzie Kristjon:
7 Weird Things to Do At Networking Events [So You Don't Feel Awkward] 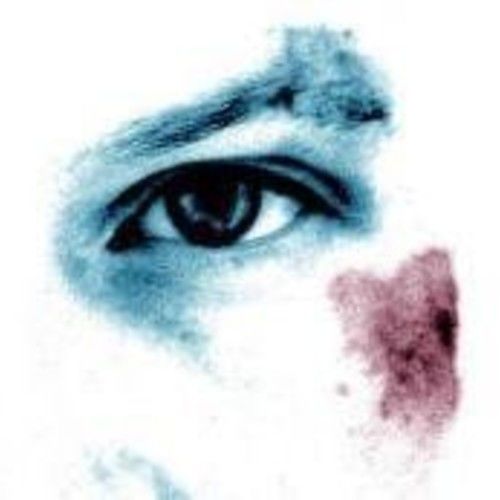 Mackenzie Kristjon is an actor and singer-songwriter whose act This Mad Desire's upcoming album American Dream's new single Antifa and the Supremacists is already out on streaming services. Soon he plans to announce his fake campaign for the American Presidency as he believes the US is ready to elect an Icelandic-Canadian president. Stand Up and Dream Again! More info on that at patreon.com/thismaddesire. His new poetry book “we are all things and all people” is available on Amazon. thismaddesire.net 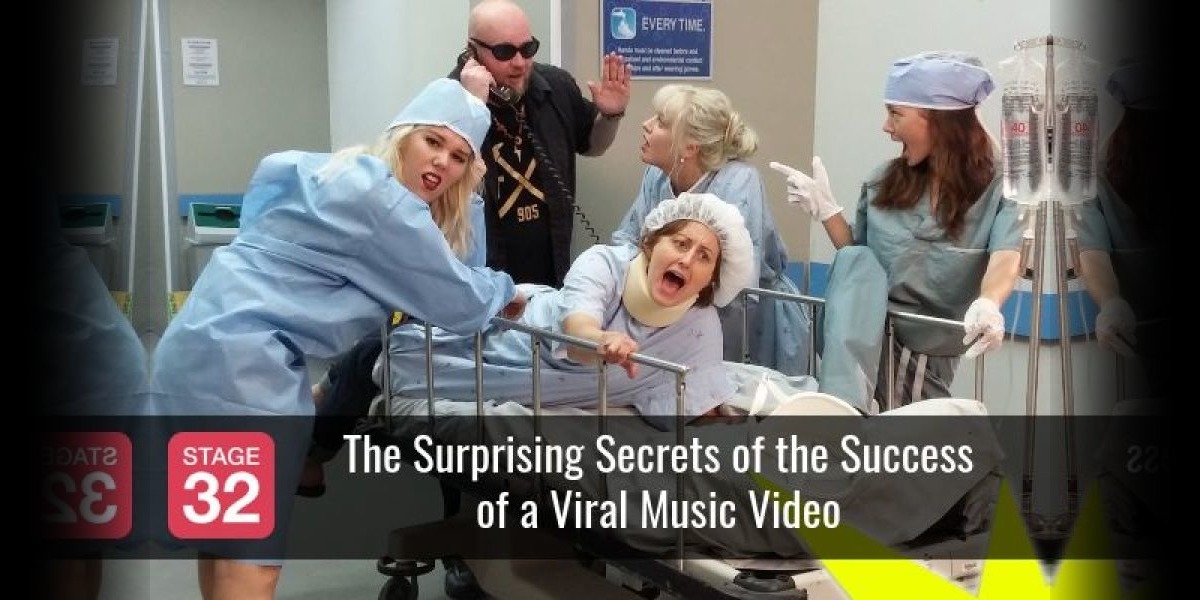