Feature and television projects from diverse writers, and stories with traditionally unheard perspectives, are essential to art, entertainment, and advancing the conversation in a way that has largely been ignored by Hollywood. However, these days, much to our contentment, things are changing. With the powerful evolution of new voices in both features and TV, projects like QUEEN AND SLIM, THE FAREWELL, ATLANTA, CRAZY RICH ASIANS, BLACK-ISH, POSE, LOVE SUGAR, INSECURE are thriving and leading the charge for more stories featuring diverse characters.

In Stage 32's ongoing commitment to find the top undiscovered talent in the world, we are proud to announce our inaugural Diverse Voices Springboard Screenwriting Contest. Since its inception in 2011 when we launched with our "One Love" initiative, Stage 32 has been committed to providing opportunities and a platform for unrepresented and underrepresented creatives from all backgrounds, including people of color, women, LGBTQ+, and those who are passionate about storytelling despite adversity. (Check out our ONE LOVE initiative here)

Now, Stage 32 is conducting a worldwide search for the best screenplays and teleplays from writers of diverse backgrounds or writers with diverse and unique stories.

If you have a diverse and unique story that needs to be told, or if you come from an underrepresented background, now is the time to bring show us what you've got, because our goal is to amplify your voice, give you the access Stage 32 is known for, and springboard your writing career to the next level!

Every industry professional who is judging the contest comes from a diverse background or has worked on diverse stories. Each judge is looking to provide opportunity for writers who have traditionally not had a voice in the industry. No matter if your script is a feature or a television pilot, no matter the budget, no matter the genre, our judges simply want to find and amplify the most talented writers from diverse backgrounds and the most interesting projects from passionate storytellers.
This year we are welcoming another all-star panel of judges from places like Disney/ABC Television Group, NBCUniversal Television Group, MetaMorphic Entertainment, Alta Global Media, First Friday Entertainment, Artists First and more who have worked on and have clients who have worked on BLACK-ISH, MIXED-ISH, SEARCHING, CRAZY RICH ASIANS, GIRLS TRIP, DEAR WHITE PEOPLE and more).

Stage 32 Director of Script Services Jason Mirch interviews Eric Jeske - the winner of the 5th Annual Feature Screenwriting Contest that just got signed through meetings Stage 32 set him up on! 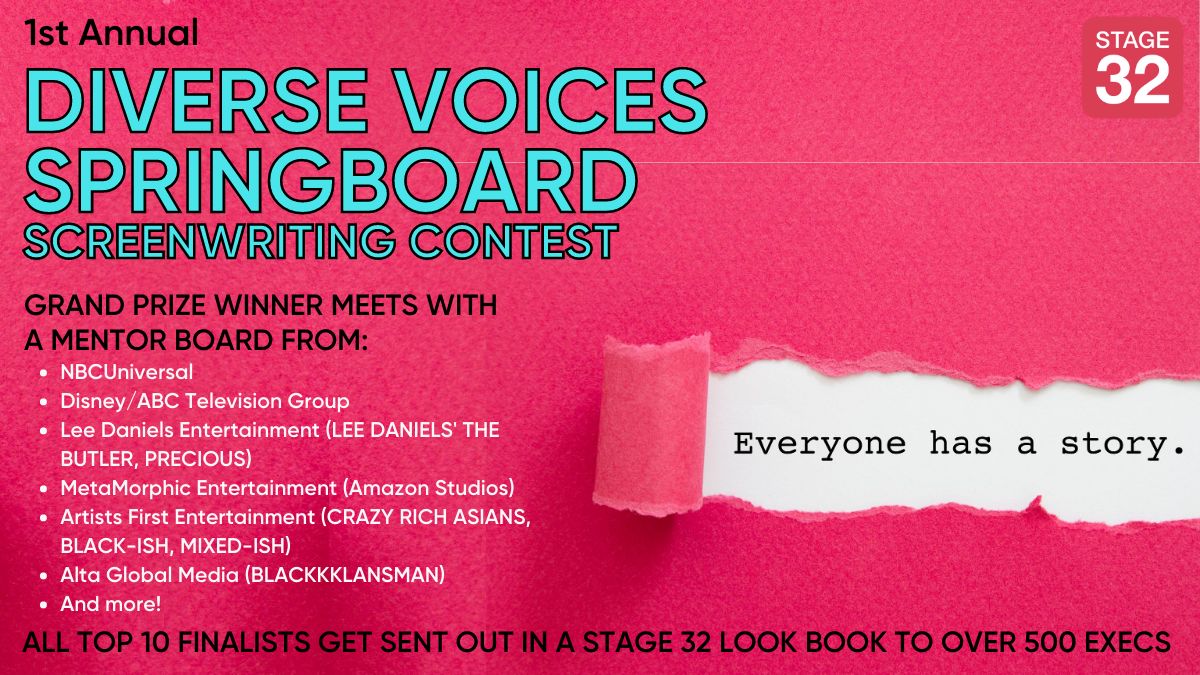