Shorts as Proof of Concept & Surrounding Yourself with Support

The March 2015 edition of On Stage With RB was our best broadcast yet! For 3 hours our Founder & CEO, RB, discussed Stage 32 site updates and had on 2 very special guests, actor Omar Leyva and Manager & Producer Jairo Alvarado!

RB went over the Stage 32 Meetups section, the new Stage 32 You Tube channel, the March Stage 32 membership drive and much more!

He then brought actor Omar Leyva (from Disney's McFarland, USA) on for an inspirational and tear-jerking interview about the support you need as a creative. It is not to be missed. Following Omar was Manager & Producer Jairo Alvarado from Circle of Confusion, who's in the middle of a studio bidding war for Sundays, a short film he's developed as a proof of concept from a filmmaker from Amsterdam.

Don't miss this On Stage With RB, it is the best one yet! 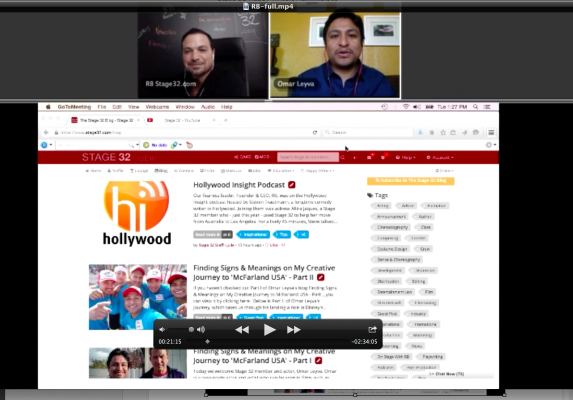 Guest Omar Leyva, who has over 50 credits between film and television, joins RB to talk about what it’s like being an actor. He talks about how he got started in the business, and how having mentors, surrounding yourself with people who are like-minded, and being a self-motivator are keys to being a successful creative. They also talk about how creatives always need support, especially when your family or community doesn’t necessarily support your chosen craft. How do you take rejection from others, and then turn it into a positive? Finally, Omar discusses how being who you are is the most important thing.

Some inspirational quotes from Omar:


Jairo Alvarado joins RB and talks about how he found a new filmmaker from Amsterdam on VIMEO named Mischa Rozema. As his manager, he developed a Kickstarter campaign to help Mischa develop a short film as proof of concept. Jairo discusses how the film industry is much less of a “trust me” business and has transitioned into a “show me” business. He talks about the evolution of DRIVE: how the film at its first pass had a higher budget and different actors, but at the second pass had a smaller budget & had Ryan Gosling attached. Jairo also explains how you rise above the noise as a writer, composer, editor, cinematographer and how aiming smaller can actually be of great benefit to you.

Some inspirational quotes from Jairo:

Questions covered during On Stage With RB:


As always, we welcome thoughts and remarks on ANY of the content above in the Comments section below...