Pre-Production Tips - From Budget to Locations: The Making of WHAT LIES AHEAD (Part 2)

Richard "RB" Botto
On behalf of the entire WHAT LIES AHEAD team, thank you.
The outpouring of good wishes and support from our community regarding the film (and this blog series) has humbled, inspired, and motivated us all. To feel that groundswell of support, it's as if you're taking this journey with us. We couldn't be more grateful.
Part 2 of our ongoing series detailing how the film came together focuses on the budget, in particular how we were able to keep it down utilizing limited locations and other tricks along the way. It's our hope that these stories might serve to educate and encourage others to move forward with their projects.
If you missed Part 1, you can read it here. We'll be releasing a new chapter of our story every week leading up to the theatrical and VOD release of WHAT LIES AHEAD on March 5th.
Enjoy!
RB

Last week we started you on the journey with Part 1 of this series. This week in Part 2, we take you into the production, where the three creators of ‘What Lies Ahead’ talk money, strategy, and family as they drove the backroads of Kentucky in preparation of shooting their film. As a reminder, What Lies Ahead was put together with no less than a dozen Stage 32'ers including writer, William Viglione, director Rob Gardner and on the producing team, Joe Burke, Stage 32 Managing Director, Amanda Toney and Stage 32 CEO, Rich "RB" Botto. 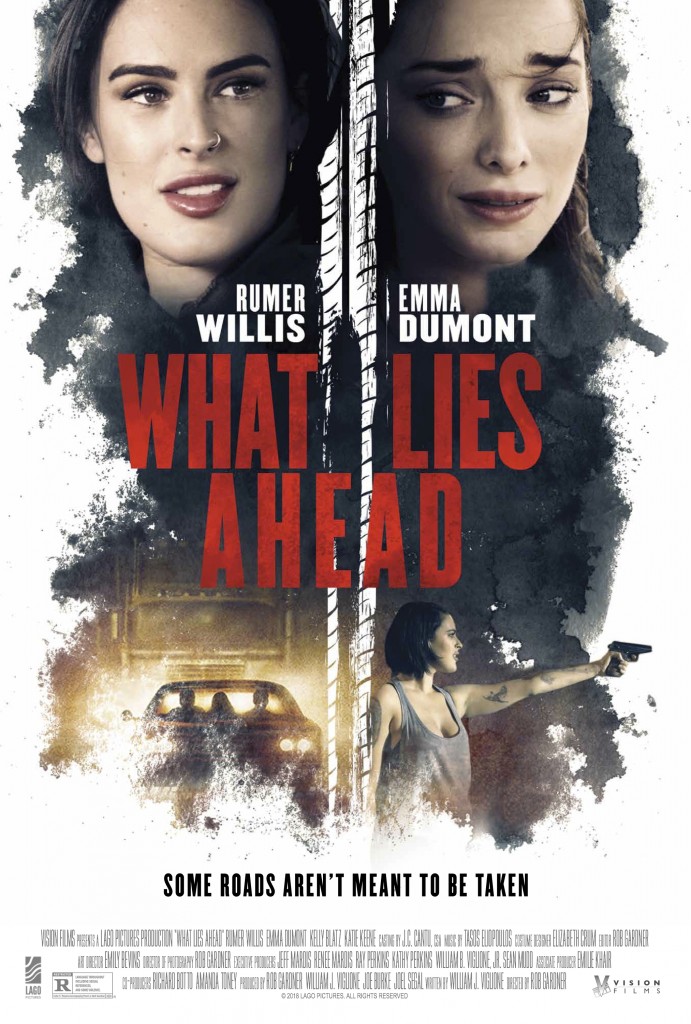 The official poster art for "What Lies Ahead," the feature film written, directed, and produced by Stage 32 members
Rob Gardner, William J. Viglione, and Joe Burke and our very own Stage 32 Managing Director, Amanda Toney & CEO, Rich "RB" Botto. The film opens March 5th in select theaters, On Demand, and on DVD.

Joel Burke “JB”: Bill (William) and I met up in Orange County, about two and a half years before What Lies Ahead went into production. At the time, he had an award-winning script in the hands of two accomplished producers. But the project evaporated on the third option. He then told me about a script he was going to write with the intent to produce it with his friend, director Rob Gardner. The story sounded interesting; a character-driven pressure cooker about two young women on a road trip. But this was no big budget affair. Tom Hardy’s performance in Locke proved that story and performance can carry a film. Bill raved about his buddy Rob, and I knew I could leverage some of my relationships in the business to help elevate the project. By the end of the meeting we had committed to create.

William J. Viglione "WV": Some people have described What Lies Ahead as a “Traveling psychological thriller.” That descriptor is pretty accurate. Growing up, I loved films like Rosemary’s Baby, Wait Until Dark, and Marathon Man. Stories about ordinary people in an ordinary situation until forces outside their control thrust them into the middle of a living nightmare. That was the genesis.

Rob Gardner "RG": I liked the twists that took place in the film, but I was also intrigued with the use of misdirects in the script. We wanted to lead the viewer, but also stay true to the plot, as the characters moved from point A to point B.

WV: We really wanted the viewer to feel like they were physically in the car with these two young women and literally along for the ride. As the story unfolds, we see everything from the perspective of Raven (Rumer Willis) and Jessica (Emma Dumont), and experience the events as the characters do. There’s no omniscient voice or cutaways to reveal story (with one exception). This not only worked for us from a budgetary sense, but as a story device we felt this would create a unique, immersive experience for the audience. 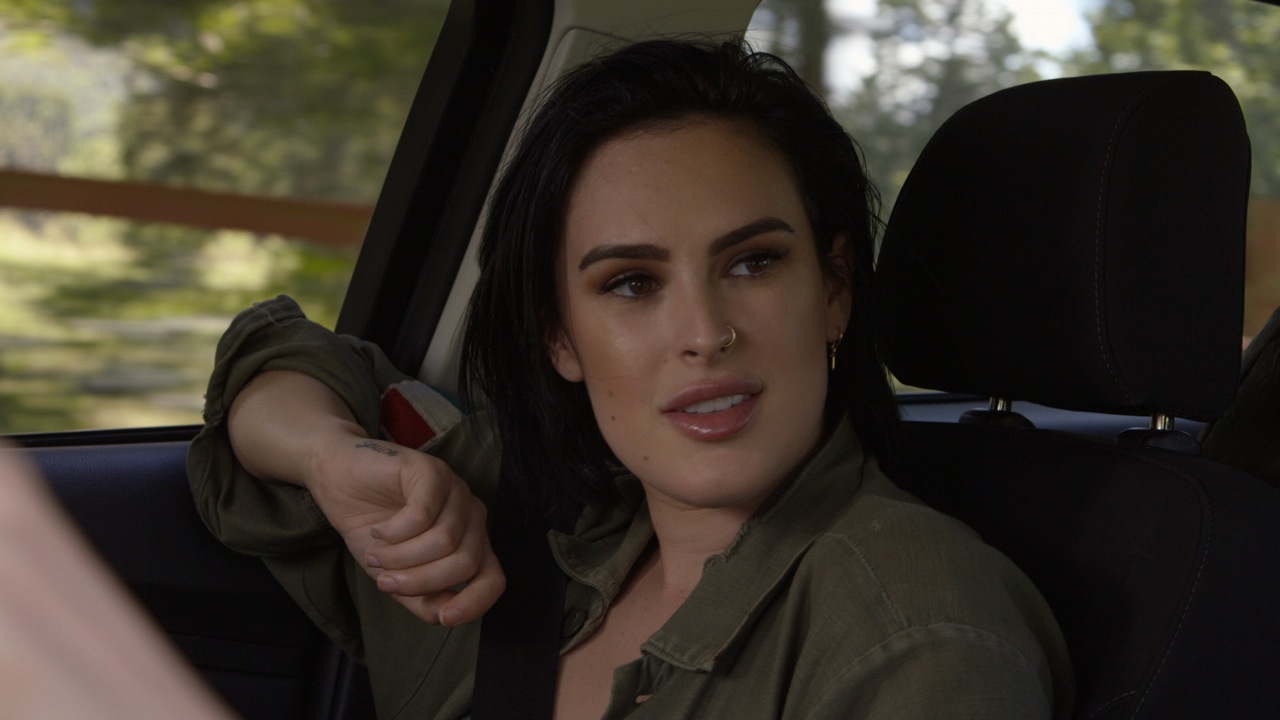 Rumer Willis takes the wheel in the road trip thriller 'What Lies Ahead.'

RG: Rumer and Emma do a lot of heavy lifting in the film, as they are in almost every scene together. They played their characters very well, taking from the script and, at times, embellishing who they were portraying. The audience will most definitely relate to these characters. Either as themselves to some degree, or possibly with someone they may know or crossed paths with.

WV: Rob, Joe, and I all come from broadcast production backgrounds, so before the script was even flushed out, we were extremely conscious of budget and thinking about what we’d be able to pull off. In fact, we were actively scouting some of our locations as the script was being written. 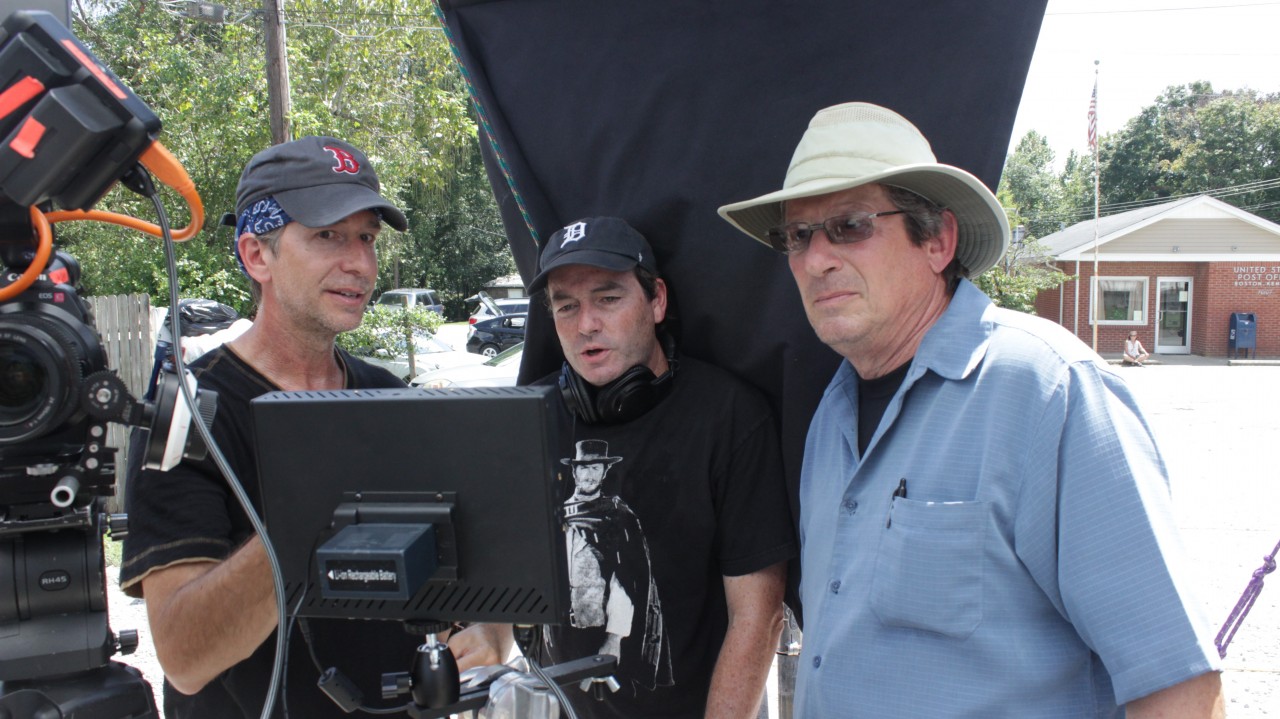 RG: I scout locations every time I get into a car. I am always wondering to myself, “What can I shoot there?” So when we had ideas in the story about environments, we set out to find those locations. We knew we needed all of the locations to be relatively close to one another, because moving too far costs both time and money. I had been shooting for years in the area of Bardstown, KY and felt it was the right place for us with its diverse locations and rural roads. We found it to be a great experience too, as the people and businesses were very welcoming.

JB: All three of us had been involved with projects that fell apart. They either lost funding, lost the cast, or fell victim to inflated egos. What separated this project from the others were three things: We all put a fistful of our own money into the project, we were not afraid to fight over creative, and we were persistent, which pushed the project past the finish line. Rob did a stellar job rallying an entire crew who worked through vicious 100 degree days with 90% humidity. Bill did a killer job with the cast in keeping them focused on the film and the story he wrote to tell. 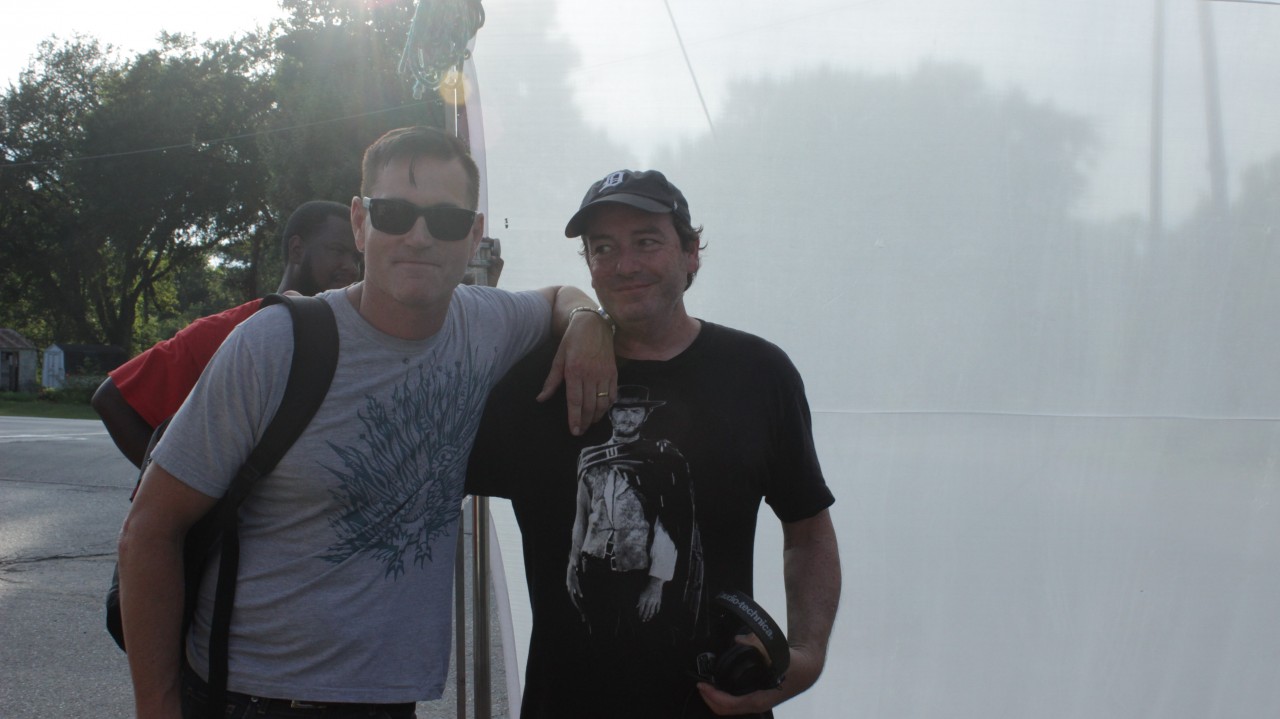 Producer Joe Burke and writer/producer William Viglione on the sweltering hot Kentucky set of "What Lies Ahead."

WV: Rob’s crew was exceptional. Many of these folks I’d worked with before on commercial shoots, with and without Rob. But these weren’t just Louisville commercial crew. Nearly everyone had experience on feature films, including key roles on major films that were filmed at least partly in Kentucky. Movies like Michael Mann’s The Insider, Sam Shepard’s Simpatico, and Secretariat. And then, of course, we had our secret weapon, Rob’s friend Joel Segal, who as an assistant director had worked on shows like Miami Vice and with directors like Tony Bill and James Brooks. Rob will tell you, we sometimes had to pinch ourselves, knowing how lucky we were to have Joel’s knowledge and experience on our side. But from our above-the-line team to our cast and crew, this truly felt like an L.A./Kentucky co-production in every way. It was an interesting mix of people who were all fully invested in this creative endeavor together.

RG: With our script in hand, it was time to begin fully financing the picture. We spoke with a lot of folks about joining the team, and I feel we found some great teammates. Some had invested in films before and some had not, so it was our job to put together information to best inform them. We talked story with them. We talked about the actors and what their presence on the film would bring. We also had a Return on Investment (ROI) study done, so that we could show what other films in our genre with a similar budget accomplished. Our executive producing team was wonderful to work with, and we were very excited to have them show up to set, and even participate as background players. There was also an aspect of family inside the film as we had two husband and wife teams as EP’s. (Jeff & Renee Mardis and Ray & Kathy Perkins.) I personally had two of my clients who wanted to participate in the endeavor, too.

WV: But that’s not where the family aspect ends. My own parents invested in the picture, as did other friends of ours to varying degrees. Rob’s daughter and cousin appear in the film, producer Joel Segal’s son has a significant part, and my own son contributed as a graphic artist. And, as Joe said, we all put our own money into the project so our investors knew, right from the start, that we were all in this together.

JB: At this point we had a screenplay we all loved, a name cast, funding, a principal photography date, and every opportunity to fail. Rob and Bill wisely had mutual creative control over the film. This forced decisions to be made and not “phoned in.” Yes, we could have spent more money on the film, but there was good news about the budget we worked with – Rob and Bill were constantly redirected back to performances. That said, there was a powerful and very real energy between Rumer and Emma, and it comes through scene for scene.

RG: With our script in place, money in the bank, and locations scouted, we were finally ready to schedule and shoot the film. That’s when things slowed a bit. Our actors were juggling many things at the time, so we waited. Until one afternoon when we received a call that the planets had aligned and so did the schedules. It was time to shoot, and it was to commence in two weeks. SCRAMBLE TIME! 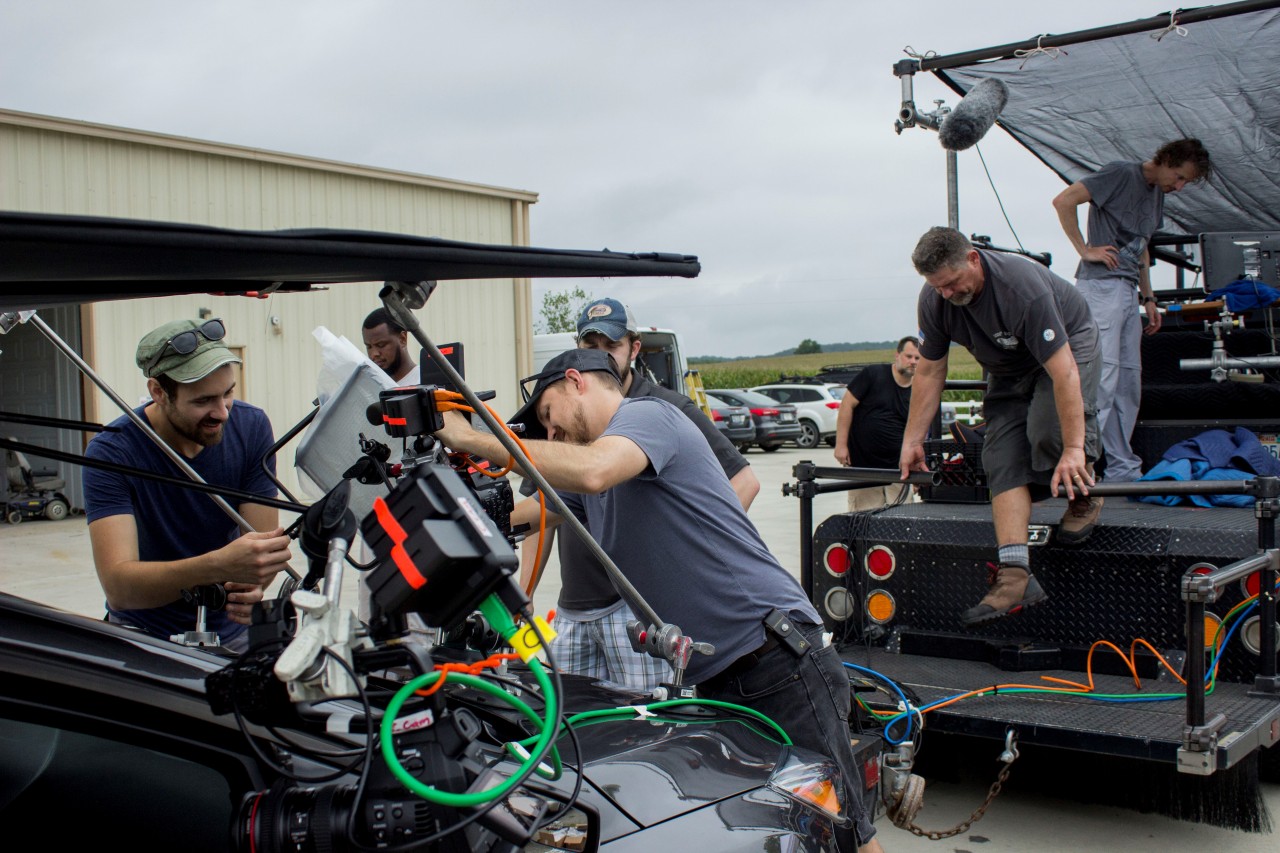 The "What Lies Ahead" crew gears up for the long road ahead.

Next week the filmmakers take you inside the 15-day shoot of the film, as well as give you an early look at the trailer for What Lies Ahead. If you missed Part 1 of the blog series here on Stage 32, Click HERE to take it in. 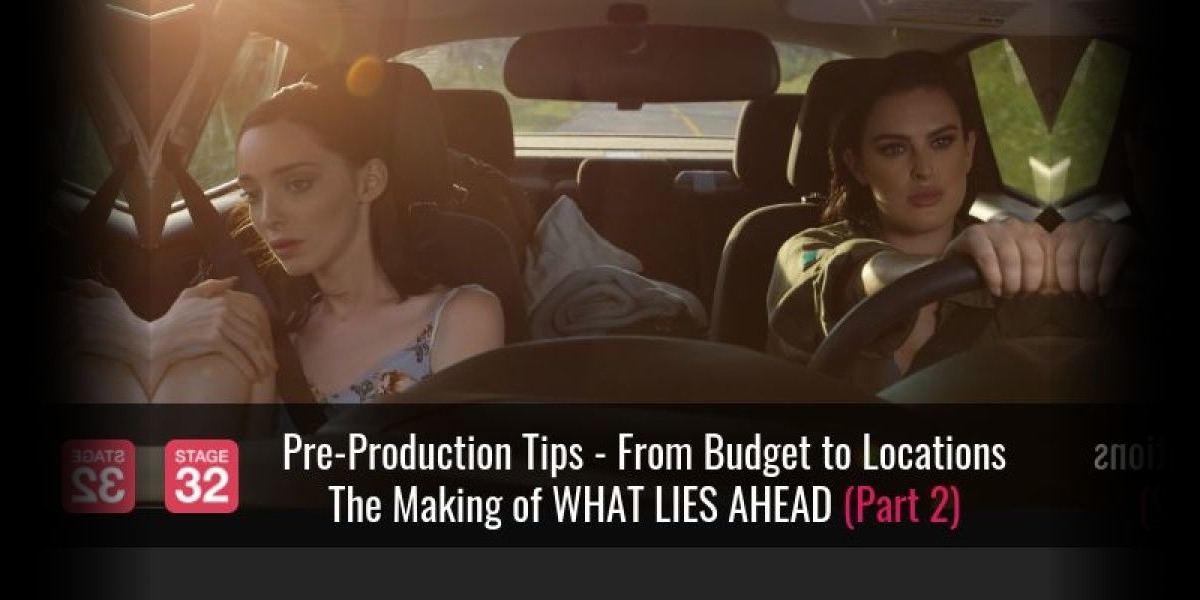