It's that time again...time for a special edition of 'On Stage With RB'!

What happens when you put 2 New Yorkers in Hollywood? Well, we're about to find out next Wednesday, May 24 at 11am as we host a special edition of "On Stage With RB" - featuring our fearless leader, Richard "RB" Botto, and special guest Bradley Gallo, CCO of Amasia Entertainment. As always, the webcast is FREE to the first 2,000 who register so grab your spot NOW! Register Here!

If you're new to Stage 32 and not familiar with our fearless leader, Richard "RB" Botto, is the founder & CEO of Stage 32. Called "LinkedIn for film creatives" by Forbes, Stage 32 has a half million members and over 1,000 hours of education. Prior to Stage 32, Botto was the founder, publisher and editor of Razor Magazine, a national men’s lifestyle magazine, which had a readership of 1.5 million at its peak. Botto is also an actor, producer and screenwriter. His latest screenplay, The End Game, is in production at Covert Media. Botto is a sought-after speaker, teaching and mentoring around the world at Cannes, AFM, SXSW, Tribeca, Sundance and more. He has appeared on such networks as FOX News, CNBC, CBS News, MSNBC and Bloomberg, speaking on the subjects of social media, networking, crowdsourcing, crowdfunding, screenwriting, business, entrepreneurial practices, and more. Botto's book Crowdsourcing for Filmmakers: Indie Film and the Power of the Crowd will be published this year by Focal Press under the American Film Market imprint.

Bradley Gallo is the Chief Creative Officer for Amasia Entertainment. He is the producer behind films like The Call (Halle Berry, Abigail Breslin), and Mr. Right (Anna Kendrick, Sam Rockwell). Amasia Entertainment is a production, finance and management company based in Los Angeles. They're behind films like Careful What You Wish For, Fear, Inc., The Road Within, The Call, and Mr. Right. Amasia is currently in pre-production on FATE, written by Gary Whitta (Rogue One: A Star Wars Story, The Book of Eli) and recently sold the graphic novel My Favorite Thing is Monsters to SONY. Amasia's TV arm, led by veteran film/TV exec Tray Mercer, recently brought in Chicago playwright Joshua Rollins and have optioned his feature film screenplay World Breaker and one-hour drama Doppel.

For this special edition 1-hour webcast we'll be going over all things going on in the industry and open up the floor to you, the Stage 32 community to ask questions about anything - your craft, the industry or just what's on your mind.

On Stage With RB "2 New Yorkers In Hollywood" Webcast 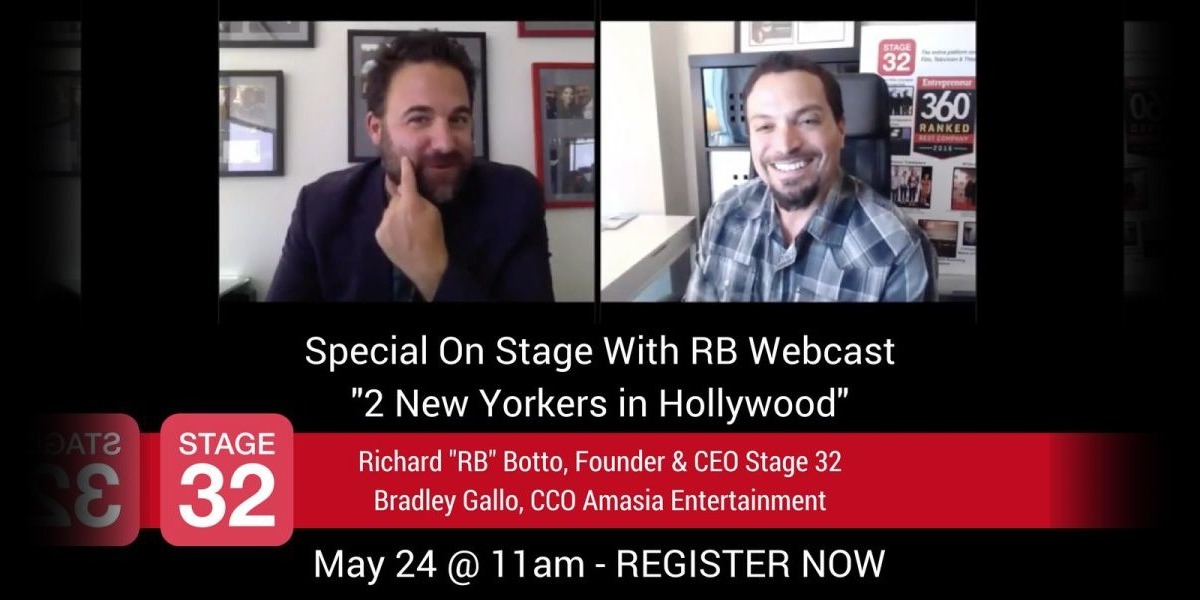