Posted 2 weeks ago by Jason Mirch

Good morning Stage 32 Creative Crew! We’re about to kick off the first full week of June with more great news to come from the Stage 32 community. You have heard me talk about the massive opportunities that exist for all creatives in the industry - including writers, directors, and talent - as more executives and agents transition into management.

Several managers that I know personally have told me they are constantly looking for new clients with unique perspectives and exciting material. One of these managers is Mike Diaz, a Literary Manager who just recently joined ATN Entertainment - a boutique management company founded in 2015 by Jennifer Aurianna Dare who was previously at Bohemia Group.

Mike says, “the goal of ATN Entertainment is to create and contribute to the success, livelihood and happiness of her clients, while servicing them with the highest level of integrity.” It was really exciting for me to get an email from Mike in which he said that he signed 3 new clients after meeting them through Stage 32!

The first client that Mike signed was writer/director Adam Etheridge, who is based in Bristol, UK. See, who says you “need to be in LA” to land representation?! Adam told me, it “was actually [the] Reel Review & 30-minute Talk with an Industry Professional on Stage 32 that originally connected Mike and I” following up with, “I sent him a proof of concept short film for a feature that I’ve written.”

Adam’s logline for the project is very compelling, “Returning to her broken family home in Africa, Kat, an isolated CIA operative, must work with her estranged Father to defeat a ruthless gang of ivory poachers intent on murdering every last elephant in South Africa.”

Mike also signed the writing team of Jonathan Beneke & P.T. Hylton through a connection made through Stage 32. Beneke & Hylton have co-written nine novels and sold over 200,000 books! Wow! Hylton, one half of the duo, gives us a bit of his history saying, “After college, two friends and I started a small production company called Plethora Films. We spent a few years making short films and almost-but-not-quite finishing a feature film.

Hylton continues, “I spent the next eight years putting all my creative energy into making podcasts, most successfully with the long-running guitar podcast Six-String Bliss. I also had some short-lived podcasts, including Guitar New Weekly, Real Dad Fitness, and Time-Traveling Film Critics.”

Then one day, during a conversation with his daughter, she asked, “Do you have any dreams, Daddy?” to which he replied, “I want to be a writer.”

“Then why aren’t you doing it,” she said. That was all it took for Hylton. to launch his writing career in earnest.

The other half of the pair, Jonathan Beneke says, “I'd like to say a big thank you to you and everyone at Stage 32. We are very excited to have a manager.”

Among the many lessons we can take away from these stories, I find the biggest are that, first you do not need to be in LA to land representation; and second, you can pivot many times in your career and find success when you make the transition. 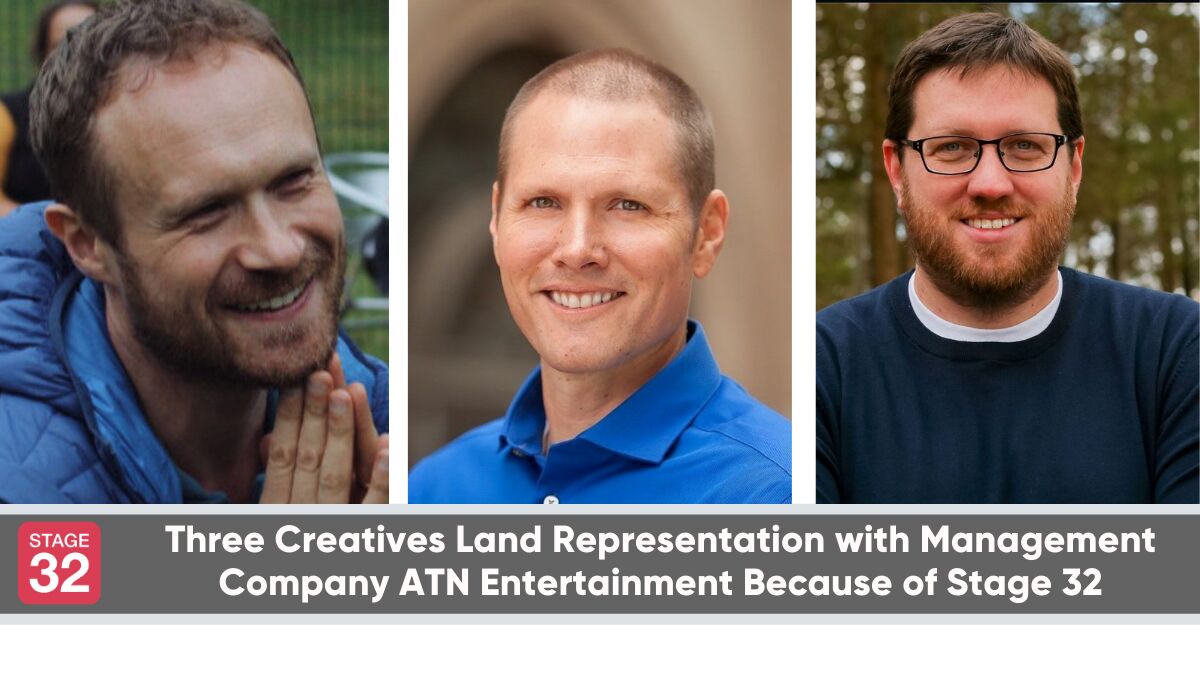