Richard "RB" Botto
Another week, another entry in the WHAT LIES AHEAD journey. Once again, I would like to thank all of you who have dropped notes or made posts on Twitter and IG expressing your support. I've shared your messages with the team and we're all most grateful.
In part 3 of our series we move into physical production. Short preparation time and filming in 90 degree weather in Kentucky presented some massive challenges and had the crew searching for quick, logical and non-costly solutions.
If you missed Part 1 or Part 2 of our WHAT LIES AHEAD series, you and read them here (Part 1) (Part 2). We'll be releasing a new chapter of our story every week leading up to the theatrical release and VOD and Redbox release of WHAT LIES AHEAD on March 1st and March 5th respectively.
Enjoy!
RB

*An important new development with What Lies Ahead: We will now be premiering March 1st in theaters in L.A. and New York. March 5th will still be VOD, DVD, and (we just learned recently) REDBOX!

For the past few weeks, we've taken you on the road with the creators of the feature film, 'What Lies Ahead' starring Rumer Wilson and Emma Dumont. Today we continue with Part 3, where the creators take us behind the scenes of a shoot that came to life beautifully with very little rehearsal time. 'What Lies Ahead' was put together with no less than a dozen Stage 32'ers including writer William Viglione and director Rob Gardner. On the producing team are Joe Burke, Stage 32 Managing Director Amanda Toney, and Stage 32 CEO Richard "RB" Botto. Take a peek at the first teaser created for the film:

Rob Gardner "RG": We were a mere two weeks away from the start of the shoot when my producer and mentor, Joel Segal, brought something to my attention. He said, “Rob, did you know that the date we’re beginning this production is the 16th, and that it’s bad luck?” I told him I had never heard such a tale, but that we were diving in, and that we were going to put an end to that superstition. We were very fortunate to have had most everything work in our favor. Sure, we had some weather delays and some crew members that bounced around due to scheduling conflicts, but we were able to shoot all the principle photography in our 15 day window, and never incurred overtime on the set.

William J. Viglione "WV": No matter how much planning and preparation you do, there’s one force that’s completely outside your control: Mother Nature. More than 80% of what we were shooting was either outdoors or Rumer and Emma inside a moving vehicle. Weather in the Ohio Valley in mid to late August is capricious as hell. The heat can be wicked, and it can also thunderstorm for days on end. Meteorologists really earn their salary here because the weather can turn on a dime. So all you can do is hope for the best. We definitely got that wicked heat, which served the story well because that’s actually how it was scripted. 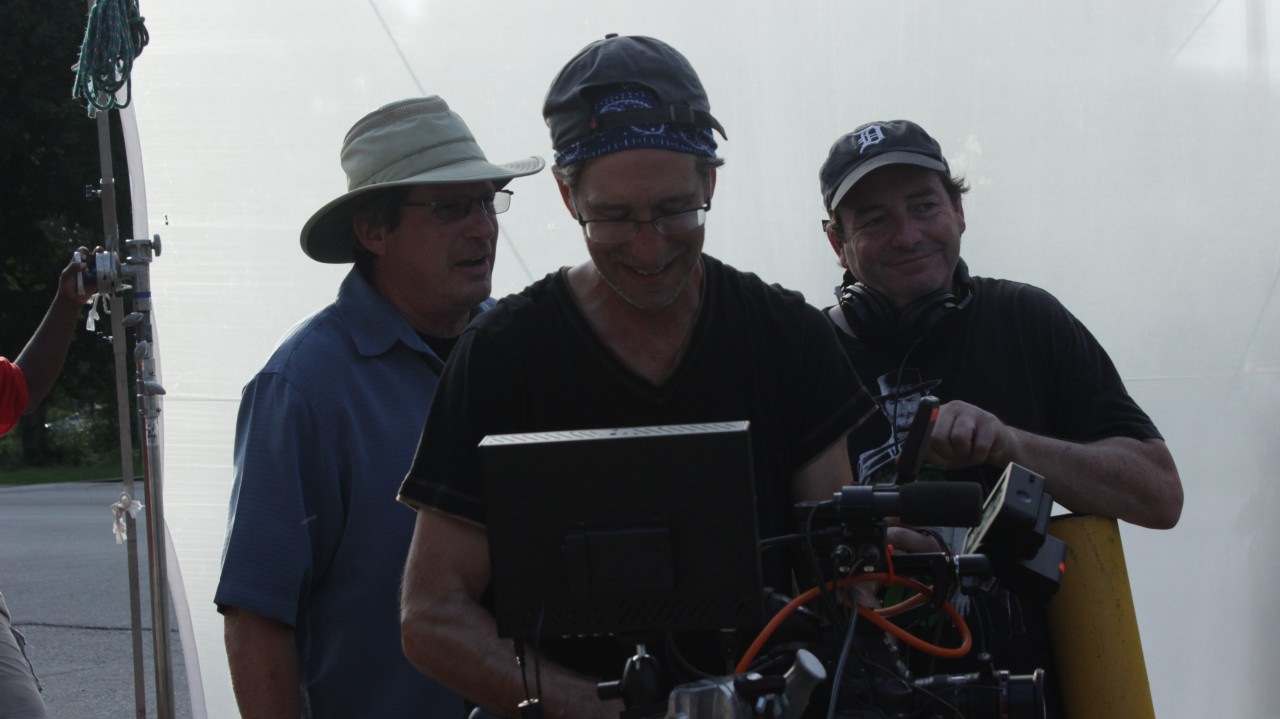 RG: The heat on those August days was brutal, but we took very good care of the gear and kept the heat off as much as we could. We never lost any time due to equipment failure because of the weather.

WV: And we did indeed get some rain. But fortunately, our production was nimble and we could adjust quickly. Our goal was to shoot as chronologically in sequence as possible, but when we knew we’d be confronted with heavy rain on day three, we went indoors for a pivotal scene that took place much later in the story, and Rumer and Emma just crushed it. All in all, as Rob said, we pretty much put to bed the superstition about starting on the 16th being bad luck, because we were incredibly fortunate in a lot of ways.

RG: The title of the film is another example. We thought we had a great name for the film, Blindspot, as it really played up the double entendre.

WV: I’ll never forget being at Comic-Con with my son and seeing a bus roll up beside us with a huge ad for a new NBC show called Blindspot. No! We loved that title and no matter how hard we tried, we couldn’t find another we liked as much or come close to agreeing on one. Until, literally, on our second day of shooting, Emma arrived on set and we started discussing it. She said, “Well, what else have you got?” We tossed out a few to lukewarm response. Then I said, “How about What Lies Ahead?” She said, “Oooh, I like that.” After Rumer joined her on set and we ran it by her, we had new our title. Thanks, ladies!

RG: We didn’t have a lot of time with Rumer and Emma prior to shooting due to their busy schedules. They both flew into Kentucky and had one full day to get acclimated and deal with wardrobe. Bill and I got to spend about an hour with them that day to go over concerns or questions about the script, and review the schedule a bit. I would have loved the luxury of a table read, but we just didn’t have the time. However, it isn’t as if we went in blindly. Together, we were able to Skype and do calls along the way, so we were all on the same page when it came to the characters they were portraying. Rumer and Emma came in prepared and ready to take on the 90 plus pages of the script. 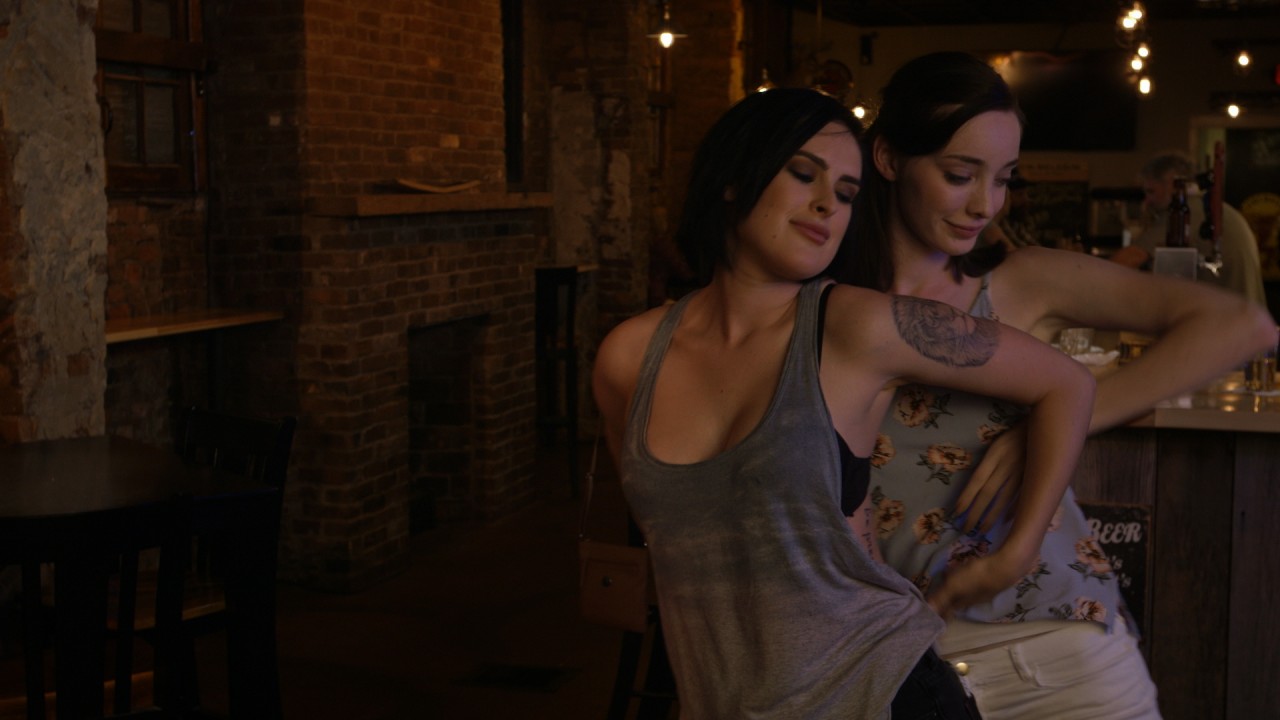 Co-stars Rumer Willis and Emma Dumont show off their moves in "What Lies Ahead."

WV: Watching Rumer and Emma bring these characters to life was an incredible high. Their performance styles couldn’t be more different yet they worked together brilliantly. Emma knew every line inside and out, and seemingly every other character’s lines in the movie. She barely altered a word, yet breathed so much authenticity and dimension into each and every one of them. Rumer liked to explore and question more. She’d twist lines to make them more comfortable for her and she liked to improvise, always taking the dialogue in interesting directions. We were laughing out loud at some of the stuff she came up with on the fly. Her creative instincts are so good and much of her improvised dialogue found its way into the final cut.

RG: They are both very fine actors, and always came prepared for the day. There was one scene where Rumer’s improvisational approach to that particular part of the script challenged the other actors playing opposite her. It was here that I wanted to let Rumer be Rumer, and really turn her loose. So, I took our day player who was more classically trained in theatre, to follow her lead, listen closely to her, and interject in those pauses, as we all knew the linear development of that scene.

WV: To be able to pull this off in 15 shoot days was possible for several reasons, in my opinion. First, the way Rob and Joel expertly planned the production, the shorthand Rob had with his crew, and how we were able to quickly change course when needed. And just as important, the performances from Rumer and Emma, who are both on screen for almost the entirety of the movie. Their preparation and commitment was evident from day one. In the hands of lesser actors, or more needy or temperamental ones, we’d have been in real trouble. 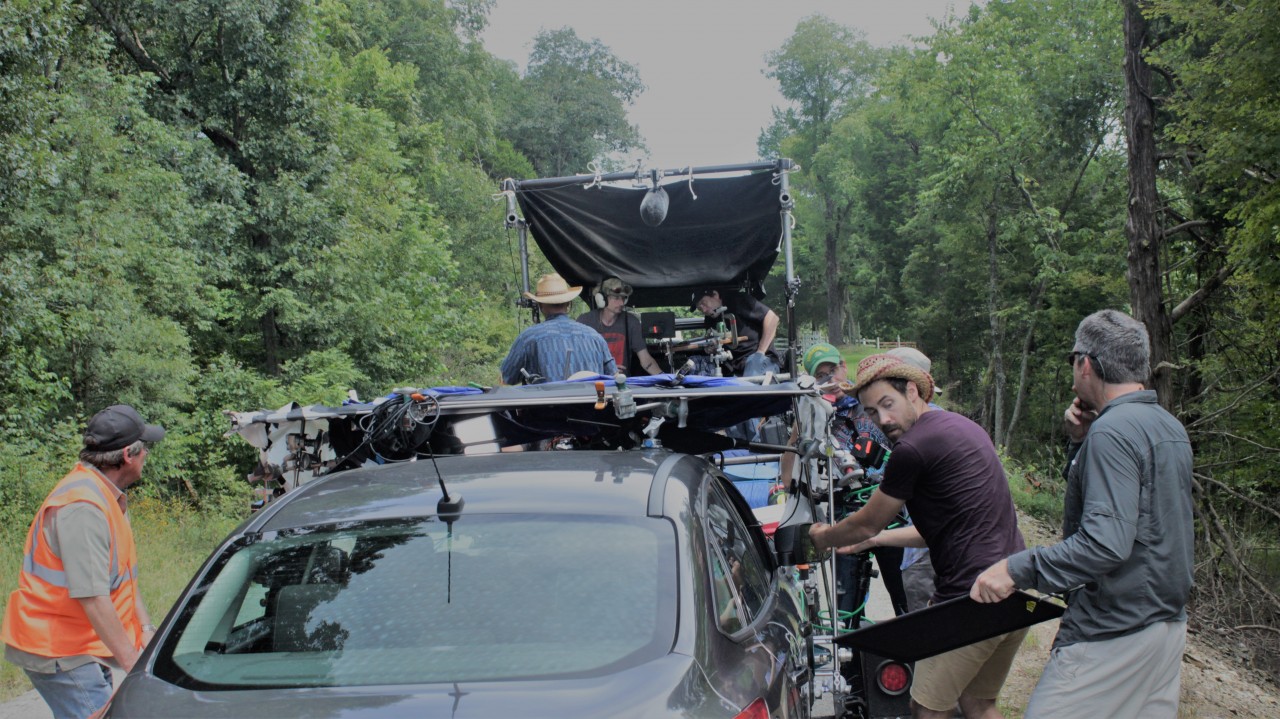 Hitting the back roads of rural Kentucky.

RG: Joel was instrumental in helping us to stay on schedule. As we put the shoot together, the one thing that was most important was to limit company moves. We were very fortunate to have a town that had so many locations in close proximity. We had our base and then would basically walk a block to one of our five locations in that area. We were also able to pull in vendors locally, too, and Laury Christensen, our production manager, did an excellent job of keeping the wheels running smoothly. As for the actual shooting of the film, we utilized up to three cameras in many scenes, and we only shot four scenes with one camera. This approach really helped in getting our coverage, and let us have a number of focal lengths to play with within a scene. This also eliminates issues you might run into concerning continuity.

WV: Some directors, and actors for that matter, like a lot of rehearsal. The fact that we didn’t have that luxury, I believe, worked in our favor in telling the story of two characters who don’t know one another and are forced into this situation together. There was a real sense of discovery from day to day, both in the performances, and in the narrative journey that takes these characters to places neither are prepared for. 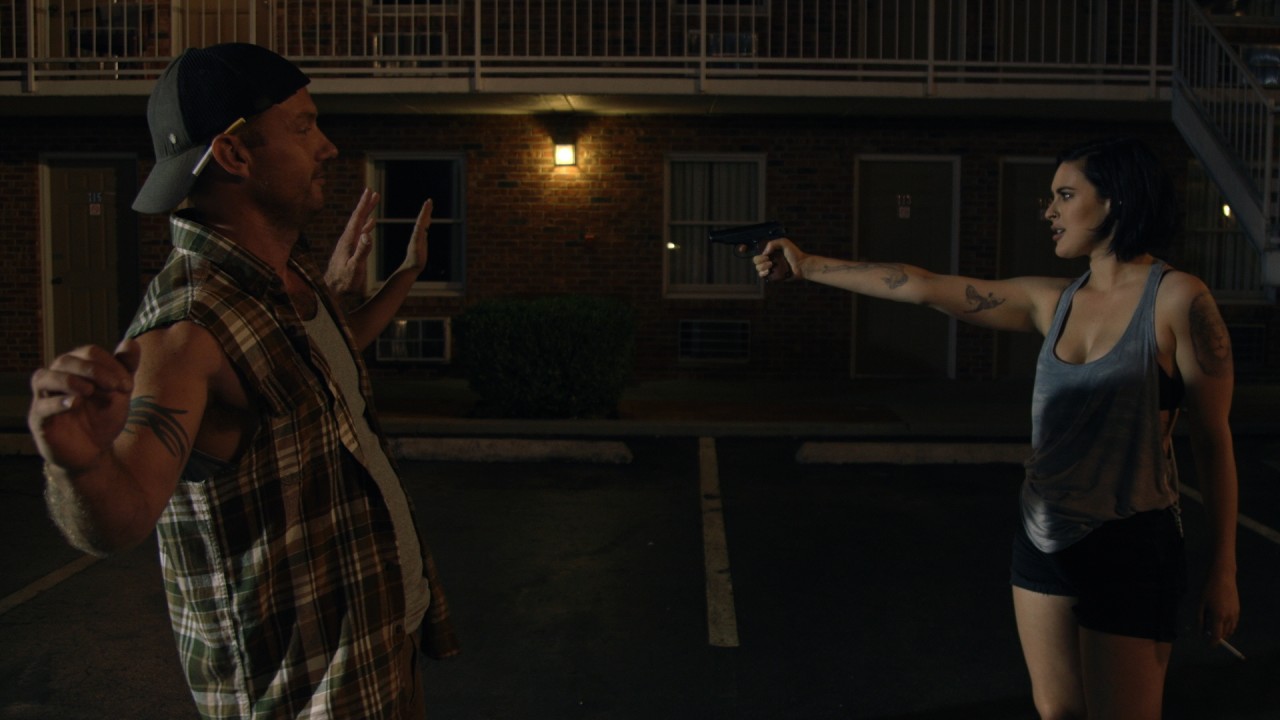 Don't mess with Rumer in the road trip thriller "What Lies Ahead."

RG: I absolutely loved shooting this film, and I’ll say it again, it was the best stress I have ever experienced. The success of this production is due to having a lot of the heavy lifting done far in advance, like finding and shooting test shots of locations, having wonderful producers and production management, an experienced and devoted crew, and lastly, talent that was professional and dialed in, not only our stars, but our day players, too.

Join our filmmakers next week where they’ll take you further inside the production, all the way through the climactic final day of filming. The What Lies Ahead Facebook Page just went live! We hope you support our filmmakers by liking the page and sharing it with your movie-loving friends and family. 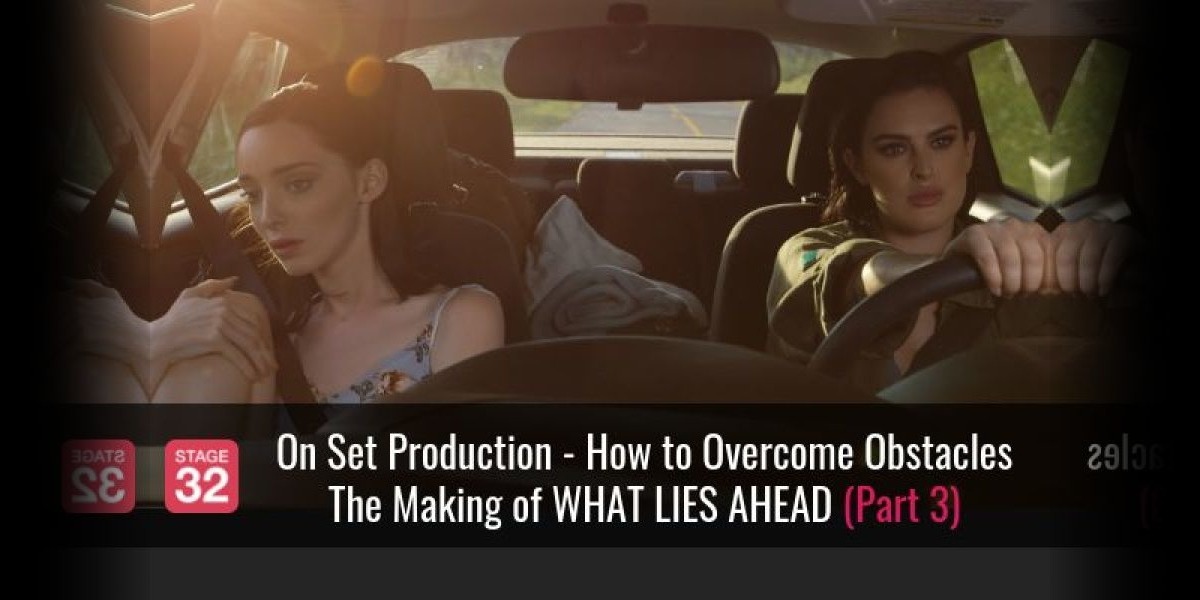