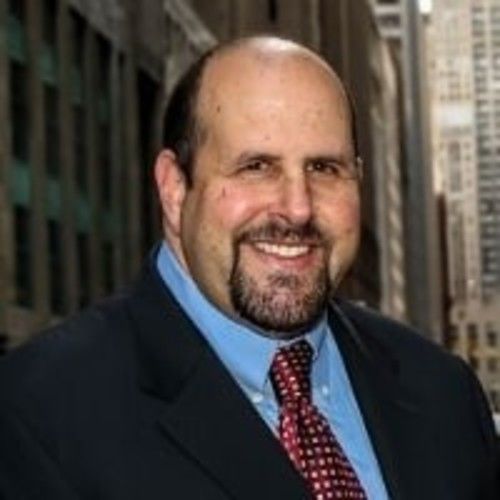 David Abels is a law partner at Abels & Annes, P.C. concentrating in Illinois personal injury, auto accident, work injury, premises liability and wrongful death cases. He often handles bicycle accidents, pedestrian accidents, motorcycle crashes, truck collisions, and many other areas of personal injury law. He has successfully collected millions of dollars for his clients and has focused on handling personal injury cases since 1997.

Dave was born in Chicago and raised in Evanston, Illinois where he graduated from Evanston Township High School in 1987. Growing up he was an avid hockey player and later became captain of Evanston’s high school hockey team.

In college, he continued to play hockey for the University of Wisconsin at Madison on the junior varsity team. In 1991, Dave received his Bachelor of Arts degree from UW Madison.

After college, Dave continued his education at the John Marshall Law School in Chicago. In 1994, he received his juris doctor degree from John Marshall and was sworn in to the Illinois Bar that same year. He is also a member of the Arizona State Bar as well.

Soon after becoming licensed in Illinois, Dave joined The Henry County State's Attorney's Office, in Cambridge, Illinois. There he prosecuted traffic, misdemeanor and felony cases. He tried numerous bench trials and over 20 jury trials while working at the State's Attorney's Office. This experience was incredibly valuable for his legal career. Almost immediately after law school he was gaining experience that most lawyers don’t obtain until many years later. His courtroom battles prepared him well to fight for the rights of those seriously injured in accidents.

After leaving the State's Attorney's Office, Dave returned to Chicago and worked for the criminal defense firm of Kreiter & Gibbons. There he mainly worked on defending felony criminal cases in Cook County, Illinois. Most of his time was spent in the tough criminal courtrooms at 26th & California in Chicago.

In 2008, Dave formed a new partnership with Gary Annes, a well-known personal injury litigator in Chicago. The firm Abels & Annes, P.C. was born with the goal of fighting for the rights of those injured through negligence of others. Partnering with Gary has allowed the firm to provide comprehensive services to its clients from the first day of a case through its resolution. While at Abels & Annes, P.C., Dave has collected millions of dollars in settlements for his clients and has a track record of success.

Dave has represented clients in several high profile cases which have resulted in Dave speaking on several news programs. He is often contacted by the media and asked to provide his opinion when a story breaks with a legal quality. The name Abels & Annes, P.C. has been mentioned in news publications as far away as the Washington Post, the Miami Herald, the San Francisco Chronicle, and online at the Huffington Post. Dave is recognized by his peers as an outstanding Chicago personal injury lawyer, and based on Dave’s history of success, this recognition is well deserved.