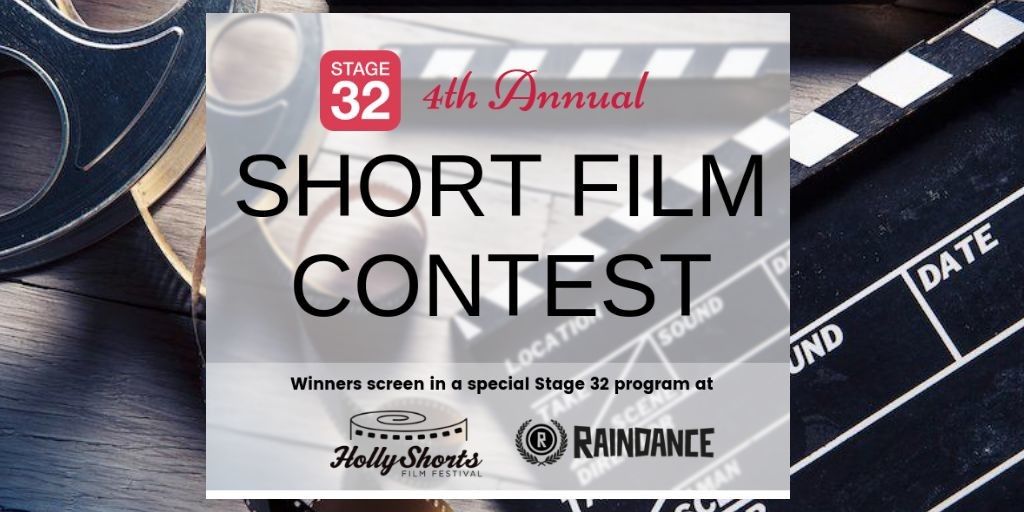 Winners Announced! The 2019 Stage 32 Short Film Program will be screening at the 2019 Hollyshorts Film Festival & the 2019 Raindance Film Festival:

TELL HIM by Virginia Bach

THE MAN WITH A PILLOW FOR A FACE by Carlos Grana

THINGS THAT FALL by Sy Huq

We are proud to open up our call for entries for the Fourth Annual Stage 32 Short Film Contest. Last year's contest produced entries from Stage 32 members in 42 countries and resulted in a curated program of 7 incredible and well received short films (made by filmmakers from 4 countries). The short film program has been featured to critical acclaim in Variety and Indiewire.

The grand prize winning Director will be flown to Los Angeles, CA for the Hollyshorts Film Festival or London, UK for the Raindance Film Festival and Stage 32 will host a Q&A with the Director after the film.

Update on our 2018 Winner, Terez Koncz (The Letters)

Lisanne Sartor, writer & director of Six Letter Word, has taken her short as a proof of concept and finished her feature script. Through Stage 32, her film, Six Letter Word, screened at the 2017 Richmond Film Festival and the 2017 Hollyshorts Film Festival and in front of Lionsgate, Samaco Films, Whitewater Films, Kodak, Legion M and CAA. She is now directing the feature version of this film and are out to actresses to package the project!

Christina Campagnola is a literary manager and producer at Imagine Artist Management, the latest venture of Ron Howard and Brian Grazer’s Imagine Entertainment. Previously, Christina was an agent in the Motion Picture literary department at the Agency for the Performing Arts. She serves on the Dean’s Council of the Florida State University Film School, where she received a B.F.A in film production.

Miranda Bailey is a prolific producer, actor and director, known for producing high quality independent films. Her passion for bringing compelling, well-crafted stories to the screen has been the driving force in her distinguished 15-year filmmaking career. Bailey has produced over 20 films, among them the Oscar-nominated THE SQUID AND THE WHALE and the Spirit Award-winning THE DIARY OF A TEENAGE GIRL as well as James Gunn’s SUPER, the Sundance hit SWISS ARMY MAN and the critically acclaimed NORMAN.

Also in 2018, Bailey teamed with Gurl.com co-founder Rebecca Odes to launch CherryPicks, a groundbreaking aggregate movie review and rating service by female critics for the female audience, which they announced at the SXSW film festival. The aggregate data service will also be useful to a wide range of studios, researchers and other data-mining customers for the purposes of determining ticket sales, box office tracking, and demographics.

Bailey’s cinematic voice was first heard when her directorial debut GREENLIT – a humorous documentary examining the hypocrisy inherent in Hollywood’s “green” movement – premiered at the 2010 SXSW Film Festival to critical acclaim and was acquired by IFC International. The documentary is available on iTunes, Amazon & Hulu.

Bailey’s second documentary entitled THE PATHOLOGICAL OPTIMIST which follows one of the world’s most hated & controversial people, Dr. Andrew Wakefield who lay claim to vaccines creating autism in children, was released theatrically by The Film Arcade and on VOD by Gravitas.

Bailey look set to continue her success in 2018, with producing projects including Rob Zombie’s RAISED EYEBROWS and Camille Perri’s THE ASSISTANTS amongst other titles she is presently developing.

Kevin Parker is a Manager at Artists First (previously known as Principato-Young Entertainment). As a manager, Kevin Parker is dedicated to building his clients’ careers while focusing on their creative, business, and production endeavors in order for them to achieve their artistic goals. His client list includes names such as comedian Billy Sorrells, director and showrunner Bennet Silverman, production company Magic Lemonade, as well as writer and comedian Elna Baker. Prior to being a manager, Kevin Parker worked as a producer for networks such as MTV, CMT, VH1, and NBC and was a writer on the television series Wild ‘N Out. He got his start in the mailroom of Artists Management Group after receiving his BA in Sociology from Morehouse College.

Teréz Koncz is a London based Hungarian film director, graduated with Master's Degree from the University of Theatre and Film, Arts Hungary. After working on blockbusters like Godzilla, Guardians of the Galaxy and Jungle Book for three years in London, she turned back to film directing. Her first short film after graduation ‘The Letters' has won several awards, including the Grand Prize of the Stage32 Annual Short Film Programme.