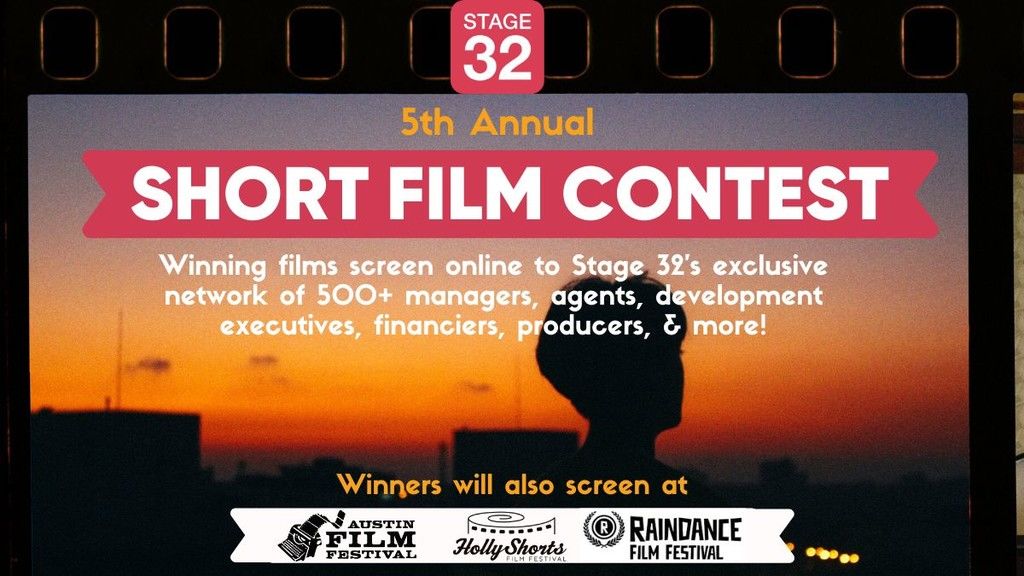 You've made a short film. You've put in your time, effort, blood, sweat, tears, and perhaps even some serious money into your project. Your goal isn't only to get your film seen, but to get it seen around the world and by people who can make a difference in your career. Would being screened by an Oscar qualifying film festival matter? How about having it screened for over 500 executives including managers, agents, producers, film financiers and more? Look no further.

The most prestigious short film competition on the planet is back. For the 5th straight year, Stage 32 is looking for the best short films for our 5th Annual Short Film Program. For the last 5 years, we've screened our winning filmmaker's films at some of the most prestigious festivals around the world, and for our stable of 500+ Stage 32 executives, and this year will be no different.

We welcome entries from filmmakers all over the world. Last year's contest produced entries from Stage 32 members in 42 countries and resulted in a curated program of 7 incredible and well received short films made by filmmakers from 4 countries.

Over the last 4 years, our winning filmmakers have gone on to be signed (UTA, Echo Lake, Verve, and more), financed, and produced. One of our winning screenwriter/directors even went on to have one of the biggest spec sales in recent years, with Warner Brothers winning a bidding war which was based off a short film!

The top 5-10 films will be screened in a special Stage 32 theatrical Shorts Program Showcase at the 2020 Raindance Film Festival, the Oscar-qualifying 2020 Hollyshorts Film Festival and the 2020 Austin Film Festival!

The grand prize winning Director will be flown to Los Angeles, CA for the Hollyshorts Film Festival or London, UK for the Raindance Film Festival and Stage 32 will host a Q&A with the Director after the film.

Update on our winner, Virginia Bach (Tell Him)

Virginia is now in talks with Zero Gravity for representation!

Update on our Finalist Sy Huq (Things That Fall)

Sy is now in talks with Zero Gravity for representation!

We screened Steve Desmond's film Monsters in front of executives from WME, Whitewater, Lionsgate and more and he went on to have a massive bidding war for his spec Harry's All Night Hamburgers, which was picked up by Warner Bros. and now has Ted Melfi attached to direct!

Aaron Bierman's film was screened at the Hollyshorts Film Festival and the Raindance Film Festival and Aaron went on to be represented by legendary agent David Boxerbaum, partner at Verve Literary and Talent Agency after Verve watched his online screening on Stage 32.

Zara's film, Maneater was screened at the Hollyshorts Film Festival and the Raindance Film Festival. After we set Zara up on meetings around town she has signed with UTA and Echo Lake Entertainment!

Dinh's film Monday earned rave reviews and we sent him on meetings around town based on his unique style as a filmmaker. He has signed with Paradigm Agency and Kaplan / Perrone Management and won NBCU's Next Generation Filmmaker and Outstanding Director Awards.

Update on our Winner, Terez Koncz (The Letters)

Lisanne Sartor, writer & director of Six Letter Word, has taken her short as a proof of concept and finished her feature script. Through Stage 32, her film, Six Letter Word, screened at the Richmond Film Festival and the Hollyshorts Film Festival and in front of Lionsgate, Samaco Films, Whitewater Films, Kodak, Legion M and CAA. She is now directing the feature version of this film and is out to actresses to package the project!

Christina Campagnola is a literary manager and producer at Imagine Artist Management, the latest venture of Ron Howard and Brian Grazer’s Imagine Entertainment. Previously, Christina was an agent in the Motion Picture literary department at the Agency for the Performing Arts. She serves on the Dean’s Council of the Florida State University Film School, where she received a B.F.A in film production.

Qasim Basir is an award-winning filmmaker whose first feature MOOZ-LUM was nominated for the NAACP Image Award. MOOZ-LUM stars Nia Long, Evan Ross & Danny Glover and is a coming-of-age tale about a Muslim boy going to college around the September 11 attacks. The film was released theatrically in 2011 and on additional platforms via Starz, Netflix and Amazon. The film gained international recognition, opening in over 25 countries.

Basir recently directed and co-wrote A BOY. A GIRL. A DREAM, starring Omari Hardwick and Meagan Good. The film had its world premiere at the Sundance Film Festival.

He is now on tap to direct the NFL biopic HAWK based on the life of Andrew Hawkins with Andre Gaines producing.

Tyler Gillett is a film, television and new media writer, director and producer based in Los Angeles. One of the founding members of the filmmaking collective Radio Silence, his recent film credits include 20th Century FOX's Ready or Not, Devil's Due, the 2012 Sundance hit V/H/S, and The Orchard's Southbound. He currently has feature projects in development at FOX Searchlight and Rough House Pictures. In addition to his film credits, he has sold three television shows -- a horror anthology to NBC, an action comedy to Comedy Central, and an adventure show to Disney XD. Tyler got his start working with the online comedy group Chad, Matt & Rob whose work has garnered over 100 Million total views on YouTube.