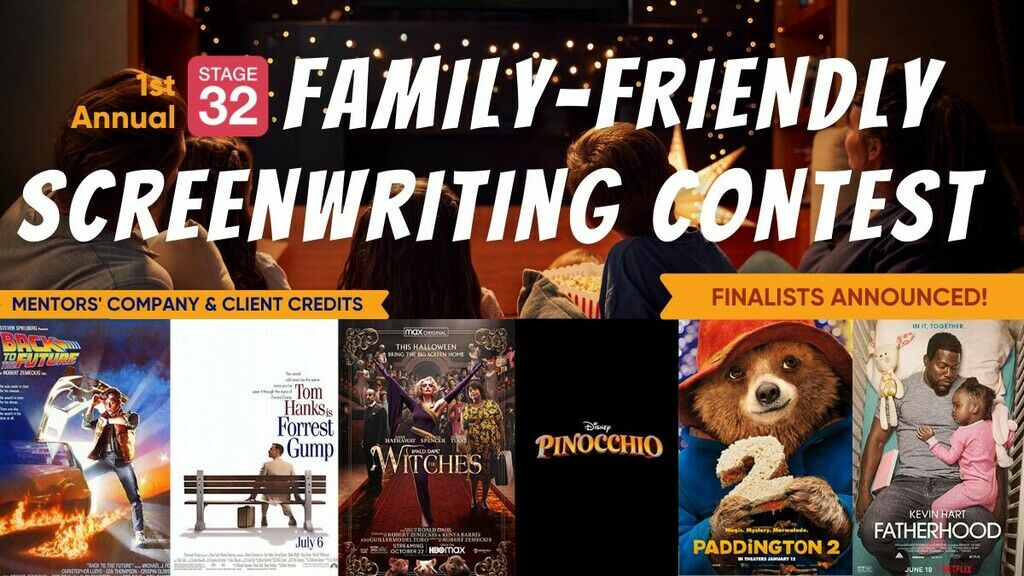 The 1st Annual Family-Friendly Screenwriting Contest is closed for submission

THE WINNER HAS BEEN ANNOUNCED

SCROLL DOWN TO SEE THE WINNER! THE WINNER WILL BE PERSONALLY MENTORED BY DGA-AWARD NOMINATED

Now more than ever we could all use some wholesome, feel-good, entertainment that brings the whole family together. And that is just what audiences are looking for! Inspiring, fun, engaging feature films that are for the whole family - not just for kids!

Thanks to classic films that leave a lasting impression such as BIG, HOME ALONE, PRETTY WOMAN, BACK TO THE FUTURE, THE GOONIES, and new hits such as THE CHRISTMAS CHRONICLES, A DOG’S JOURNEY, SPY KIDS, and more Family Friendly films offer something for everyone.

And as Miguel says in the Pixar smash hit COCO, “We may have our differences, but nothing's more important than family.”

At Stage 32 we want to make sure you are able to meet the market where it is! We recognize that producers, studios, actors, streamers and audiences are clamoring for Family-Friendly films, so we’re going to bring your best scripts right to them!

Nowhere else do you find top judges and mentors like you do on Stage 32. The Grand Prize Winner will meet with an incredible panel of judges from companies that have produced some of the great Family-Friendly films in recent memory including recent hits including FINDING ‘OHANA, FATHERHOOD, THE WITCHES, PINOCCHIO, DUMPLIN’, PADDINGTON, and classics including BACK TO THE FUTURE, FORREST GUMP, ALMOST FAMOUS, CAST AWAY, and more! If you write feature films for the whole family this contest could launch your career! We are looking for family Comedy, Action/Adventure, Drama, Romance, Holiday, Animation, Mystery, Teen, Tween, Fantasy, Sci-Fi, and anything else that is accessible for the whole family!

ImageMovers (BACK TO THE FUTURE, THE WITCHES, FORREST GUMP)

Congratulations to our Winner!

Congratulations to our Finalists!

Congratulations to our Semifinalists!

Congratulations to our Quarterfinalists!

We're looking for Family-Friendly films of all genres!

All genres of feature film screenplays are welcome. Please no series or shorts.

Casey Malone, Creative Executive, ImageMovers (BACK TO THE FUTURE, THE WITCHES, FORREST GUMP)

Casey Malone is the Creative Executive at ImageMovers the production company of feature film Writer/Director/Producer Robert Zemeckis.
Most recently she's worked on FINCH with Tom Hanks for Amblin Partners, Warner Bros.'s THE WITCHES, NBC 's "MANIFEST", and Disney's live-action PINOCCHIO.
She also has several original series and feature ideas in development. Casey meets with writers, directors, actors, producers, and is always searching for new and incredible stories to tell. And with a penchant for horror, she'll never say no to a good ghost story!
Prior to working at ImageMovers, Casey worked in production and at CBS Television. She worked at "THE PRICE IS RIGHT" and then made the jump to scripted TV and film at ImageMovers.

Michael Schulman currently works at Netflix in the Independent Original Film (IOF) division. There he does story analysis for submission made to Feature Film Acquisitions Department in a variety of media, ranging from screenplays, novels, non-fiction manuscripts, and and others in both English and French.

Prior to his role at Netflix, Michael spent nearly a decade in the story department at CAA where he found projects for CAA clients.

Michael began his career in the notorious mailroom of the William Morris Agency and subsequently became the trainee to the Worldwide Head of Talent, before moving to ICM where he were promoted to Agent in the Motion Picture Literary department representing writers, directors, and producers. There he found the script GROUNDHOG DAY, which he pitched to Harold Raimis, and became a family classic.

Michael has also held numerous studio creative executive positions at Orion, TriStar, and Disney where he worked to develop film and television projects with some of the top talent in the industry.

Will McCance is currently Vice President of Production for Ian Bryce, producer of blockbusters like SAVING PRIVATE RYAN, ALMOST FAMOUS, the TRANSFORMERS franchise, and most recently Michael Bay's SIX UNDERGROUND for Netflix. At Ian Bryce Productions, Will oversees the company's entire development slate.

After UTA, he moved into development at Original Film's TV department, working on hit shows such as THE BOYS (Amazon) and PREACHER (AMC), as well as on SWAT (CBS) and HAPPY! (Syfy).

This Literary Manager is based in one of the most well-respected, A-List management companies in the industry. The company represents exceptional talent and literary clients across film and television.

As a Literary Manager, he capitalizes on his relationships with producers and studio executives to cultivate writer and director careers. He represents clients across features and television. He started his career at UTA where he worked with some of the most well-known names in the comedy space

Mike Sammaciccia is the founder and producer at Afterglow Pictures. Most recently, Mike produced the Action Thriller “SURVIVE” for Jeffrey Katzenberg, which starred Sophie Turner and Corey Hawkins.
Afterglow Pictures specializes in content guaranteed to leave a lasting impression on the audience long after the glow of the screen fades. Afterglow has over 15 projects in development including a documentary and tv series with Will Smith's Westbrook Studios.
Mike began his career with Robert De Niro’s Tribeca Productions and Miramax Films. From there, he became Walden Media’s first creative executive, bringing in the book HOLES and serving as the executive in charge of production. He was SVP of live-action movies and series for Nickelodeon for many years, producing 4-5 live action and animated movies per year. This content consistently broke audience benchmarks and propelled the careers of many young stars.