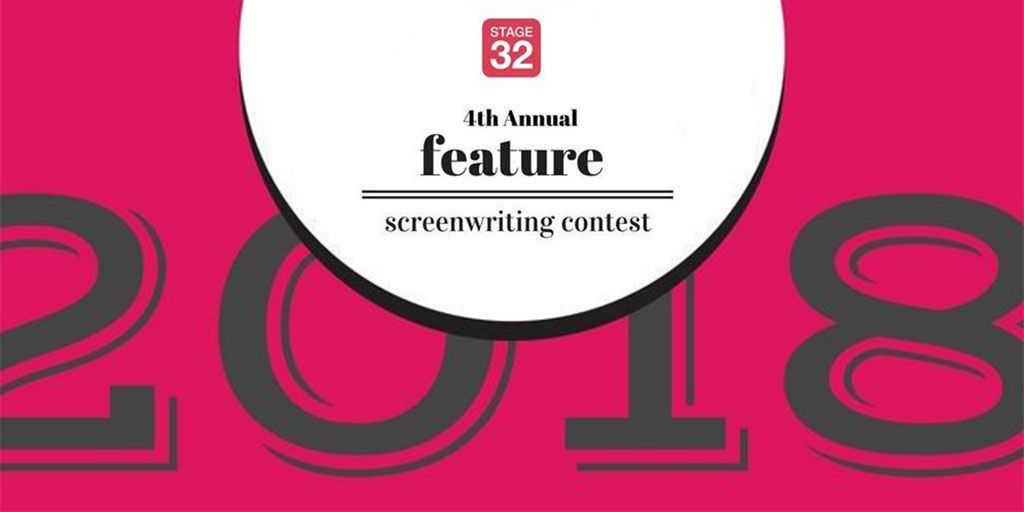 THE GRAND PRIZE WINNER AND RUNNER-UPS HAVE BEEN ANNOUNCED! SEE BELOW!

Last Year’s Grand Prize winner, Jonathan Jordan, was sent on 8 meetings all around Hollywood. One of these meetings led to Jonathan getting a deal with Verve for his winning script, Golden Girl.

***UPDATE*** - Through the meetings we sent Jonathan on and his deal with Verve, he just signed a deal to write a screenplay for two international producers, beating out 2 Nicholl finalists in the process! He is also going in for a 2nd pitch to one of the industry's biggest studios!

Over the last 4 years, Stage 32’s screenwriting contests have gained a reputation as one of the “most worthwhile screenwriting contests to enter.” The reason for this is simple: We provide unparalleled access to industry executives and work directly with our winning writers in an never ending quest to help them find success.

9 of our past contest finalists have either been signed, optioned or had their projects put into development!

In short, we care about your career! It’s the only thing that matters.

And now we’re back with our biggest, most inclusive contest of the year – Our 4th Annual Feature Screenwriting Contest.

This contest has proven to produce some of the most sought after material from our finalists and winners. Requests for our finalists scripts have increased year over year and our winners have met face to face with a who’s who of working industry executives and gatekeepers.

So no matter what your genre, no matter how small or big your budget, whether you write indie or studio, small scale or blockbuster, it doesn’t matter. This contest levels the playing field. Our judges simply want to find the most talented writers producing the coolest, most interesting talent!

Our grand prize winner will be flown to Hollywood to have in person meetings with all our judges and other executives. ALL of our finalists will have their loglines presented to the hundreds of executives we work with in a private section of Stage 32. More access, more exposure, more reads, more success!

All genres are welcome, as long as the screenplay is a feature screenplay.

For an additional fee of only $49 (50% savings!) you can receive full coverage from our industry readers on your screenplay or teleplay. Just check "coverage" upon checkout. Coverage will be returned once the winners are announced.

The Grand Prize Winner will be flown to Hollywood and set up on meetings with the contest judges! Stage 32's executive team will send out your screenplay title, logline, writer bio & script synopsis to over 500 development executives, producers, managers & agents who work with Stage 32. If an executive requests the script or a meeting, we will facilitate the delivery.

All finalists will have their screenplay title, logline & writer bio sent to over 500 development executives, producers, managers & agents who work with Stage 32. If an executive requests the script or a meeting, we will facilitate.

Nick Terry is a Manager and Producer at Zero Gravity Management, a management and production company with over 500 clients and over 20 productions under their belt. They've recently begun producing TV projects with Netflix's "Ozark" and have worked on features including THE ACCOUNTANT, A FAMILY MAN, and RUNNING SCARED.

Zero Gravity's clients include major stars like Maggie Grace, Katherine Heigle, Angela Lansbury and more who have worked on film and television including JUMANJI: WELCOME TO THE JUNGLE, KNOCKED UP, "Law and Order", "Supernatural", BIG DADDY, "Grace and Frankie", THE CABIN IN THE WOODS, "Jane the Virgin", "The Goldbergs", "NCIS", "The Big Bang Theory", "Will & Grace", "iZombie", WHISKEY TANGO FOXTROT, and RESIDENT EVIL: VENDETTA.

Nick is currently Executive Producing JT Mollner’s 18 WHEELS AND A DOZEN ROSES, and Producing the horror/thriller REFLECTED, written by client Joe McClean. He also set up a TV development project early this year at Studio L (Lionsgate) for two development clients and in negotiations to package a feature for two clients (a Producer and Writer).

Nick began his career at Paradigm Talent & Literary Agency, working his way up from the mail-room. Prior to joining Zero Gravity, he partnered with Rob Zombie’s long-time Manager and Producer Andy Gould to work with and develop writers & directors.

Mr. Jonathan Halperyn is the founder of Hero Squared Productions in Budapest, Hungary. Hero Squared offers production servicing solutions across the CEE region (and beyond), as well as development and production of its own original film and TV content.

Recently, as an in-house producer with Korda Studios, he helped attach financing, sales, distribution, and cast elements to projects by utilizing his network of some of the industry’s most well-known banks, sales agents, private equity, and agency partners. He further helped international projects right size their budgets via the cost savings and incentives in the region.

Previously, as Managing Director of Focus Features International, he oversaw all aspects of the FFI business, including finance, financial planning, strategy, and distribution of the FFI library of Focus produced and third-party films. In prior years, his focus was on individual film modeling, analysis, and P&L’s, as well as interfacing with international producers and distributors.

Throughout 11 years with Focus Features, and 15 years in media and entertainment, he has worked on films such as Lost in Translation, Eternal Sunshine of the Spotless Mind, and Brokeback Mountain, and recently served as an Executive Producer on Season 2 of Ransom, seen on CBS in the US.

Jonathan holds an MBA from NYU’s Stern School of Business.

Evan is the development executive for Team Downey, Robert Downey Jr.'s production company, where he works on project development in both features and TV. Team Downey has several movies in development set-up at WB, Focus, and Annapurna, and TV shows set-up at HBO, Hulu, TNT, and other projects in development. In the unscripted space, the company is currently producing a doc-series on Artificial Intelligence for Youtube Premium. Evan attended USC and studied theater and screenwriting.

Viviana Zarragoitia began her career in the entertainment industry working in production accounting at Millennium Films and Bold Films.

In 2013, she joined Three Point Capital, a boutique firm that specializes in senior lending on film and television projects. While at Three Point Capital, Viviana has been involved in the financing of over 70 independent films, and worked with such producers as Cassian Elwes, Rob Barnum, Anthony Bregman, James Schamus, Aaron Gilbert, Kimberly Steward, Nicolas Chartier and Kevin Frakes, among others. As Vice President, Viviana closes the financing on every film that the company is involved in, as well as manage the company's operations in its satellite offices (Ohio, Kentucky and Louisiana). Viviana has received over a dozen Executive Producers credits on titles she has financed.

As lead producer at Third, Samm has eight feature credits to his name, these include coproductions with Sweden, Germany and Australia. These have premiered in Cannes, Venice, Sundance and SXSW and have featured at London, AFI, MoMA Docs as well as countless others. Recently, in 2018, his feature Island of the Hungry Ghosts won best Feature documentary at Tribeca. He is a member of BAFTA, EAVE and ACE. He sat on the Short Film Jury in Berlin 2010 to award the Golden Bear. He is a group leader for EAVE, Feature expanded and the Venice College Cinema. He also delivers training for Creative England, Film London, Arts Council England and FACT. Samm has been a patron or board member at several film festivals and is also a film academic.

Adréana Robbins is the Literary Managing Director for Bohemia Group, an international talent management company. She represents screenwriters, filmmakers, producers, directors, playwrights and authors throughout the world. In addition to managing clients, she works collaboratively with the project development and production arm of the company, Bohemia Group Originals (BGO) with a focus on developing literary talent, producing, and pitching film, television and documentary projects.

Adréana began her career in entertainment PR and has worked in newspaper and magazine publishing. She has written over fifty articles and is the author of the novel Paris Never Leaves.Born in Cannes in the picturesque south of France, Adréana is the daughter of the late author and book adaptation to movie magnate, Harold Robbins. Adréana grew up in the film industry of Cannes and in Hollywood. She believes in the power of passion, storytelling and teamwork.

Raquelle David has worked across independent film and television as a producer as well. Her multiple film credits have garnered a number of accolades including nominations for Palme d’Or at the Cannes Film Festival, Australian Academy Cinema and Television Arts (AACTA) Award and the Screen Producers Australia Award. Raquelle previously worked for Goalpost Pictures, Seven Network, Screen New South Wales in Australia and Rhombus Media in Toronto, Canada, under the tutelage of producer Niv Fichman (THE RED VIOLIN, ENEMY, BLINDNESS).