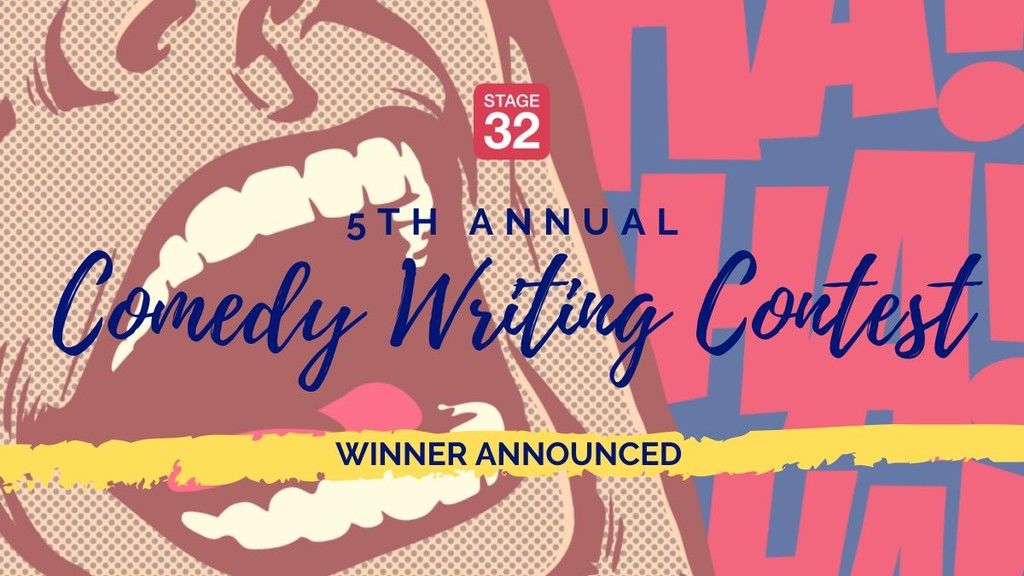 The 5th Annual Comedy Writing Contest is closed for submission

THE WINNER HAS BEEN ANNOUNCED! SCROLL DOWN TO SEE!!

All finalists' loglines will be sent out to over 500 industry executives in a Stage 32 look book! If an exec requests your screenplay or a meeting, we will facilitate!

So you think you're funny, do ya? Well your timing is spot on. Comedy screenplays are hot again!

Thanks to the success of such films as Game Night, the $10MM+ festival sales of indie comedies such as Late Night, The Big Sick and this year's Sundance record breaker Palm Springs, plus the pure fact that every major streaming platform is investing big dollars in the genre, comedy screenplays are back in high demand!

For the last 4 years, Stage 32 has helped uncovered some of the freshest new voices in comedy (success stories below). If you have a comedy feature or television screenplay ready for action, we want it!

Our panel of judges are not only experts in the field of understanding comedy writing, but are on the hunt for new comedy writers and material.

In short, Stage 32 contests offers screenwriters unprecedented access to some of the industries leading industry players who are launching careers and getting projects made!

The winning screenwriter will be flown to Hollywood for multi-day meetings with executives.

ALL finalists will have their loglines sent out to our extensive list of executives who work directly with Stage 32. If an executive requests your screenplay or a meeting, we will contact you to facilitate!

Some Success Stories from our previous 4 Comedy Contests:

We’re looking for any and all original comedy based screenplays and teleplays.

Everything from broad comedy to rom coms to parodies to dramedies to horror comedy to indie comedies and beyond will be accepted!

30 or 60 minute Original Comedy Pilots. Please no spec scripts based on existing shows.

Will be flown to Los Angeles to meet privately with the contest judges! But that isn't all! The Grand Prize winner will also meet with executives from:

The Stage 32 Comedy contest has resulted in numerous success stories for our winners and finalists!

Check out his video here:

Our 2018 winner Diana Wright was signed to The Cartel and Abrams Artists Agency!

Check out her video here:

Our 2017 winners, Anthony Guidubaldi & Keith Strausbaugh (Shorebreak), were flown to LA and sent on a whirlwind of meetings with executives and production companies resulting in:

Prior to her work on "Workin' Moms", Lisa worked on the AMC series "American Gods."

Jonathan Kite is an American actor and comedian from Skokie, IL and has a Bachelor of Fine Arts degree in Theatre from the University of Illinois at Urbana-Champaign.Best known as "Oleg," the hilarious, lovable, sex-crazed Ukrainian cook, opposite Kat Dennings and Beth Behrs on the CBS hit comedy, "2 Broke Girls," Kite credits Wilt Chamberlin and Ukrainian porn star Vlad, the Impaler as major influences when he created his character. In addition, he has been seen in a number of notable supporting roles on television including FOX's "Family Guy", "American Dad", "Raising Hope", and the Jamie Foxx produced sketch show "In the Flow with Affion Crockett", Netflix's "Boss Baby" and "Cleopatra In Space", and Adult Swim's, "Black Dynamite: The Animated Series" where he voiced many of the color impaired characters. Aside from a busy acting career, Kite is an expert impressionist boasting over 120 celebrity impressions that include: Tom Hanks, Anthony Bourdain, Ryan Reynolds, Vince Vaughn, Seth Rogen, Adam Driver, Christian Bale, Jeff Bridges, Robert Downey Jr., and John Lithgow.He is also a national and international headlining comedian having performed in top clubs all over the world. He recently filmed his first stand up comedy special,"Jonathan Kite's Back to School Special" at his high school alma mater Niles North, where it all began.

Travis is the Creative Executive at Smart Entertainment, a production and management company based in Los Angeles whose projects have grossed over a billion dollars. Most recently the company produced the wildly successful Ted franchise, with Seth MacFarlane and Mark Wahlberg, Blades of Glory starring Will Ferrell, Jenna Fischer and Amy Poehler and Anger Management starring Adam Sandler, Jack Nicholson and Marisa Tomei.

These projects have given Smart Entertainment the opportunity to work with other amazing companies including DreamWorks, Paramount, Disney, Universal, Blumhouse, Fuzzy Door Productions, Bluegrass Films

Prior to Smart Entertainment, Travis worked at CBS where he worked on shows including "Price is Right", "American Idol", "Baby Daddy" and "Melissa & Joey," before moving to the industry-leading talent agency Innovative Artists.

Joe Ferrante is the Development Producer at Verite Entertainment.

Joe got his start in entertainment in Japan where he wrote and produced two shows for Fuji TV. He has developed for series with Comcast, MTV Networks and Warner Bros. He has sold projects and developed series with Bernero Productions, as well as writing several award winning scripts.

Verite has worked on projects with Disney, Warner Bros., Dreamworks, Nickelodeon, and Amazon. They have produced high quality work for a long list of clients in Hollywood and around the world.

This executive has also worked in the Diversity Department of the Writers Guild of America, where he helped produce a Pitch Learning Program with the National Hispanic Media Coalition. The program became a model for teaching writers the skills needed for pitching.

Elisha Yaffe is an award-winning actor, writer, producer, and director. As an Executive Producer and Writer, he's been commissioned to write 1/2 hr comedy pilot scripts for TBS and Super Deluxe. He was the Co-Showrunner on an 8 episode 1/2 hr comedy series for go90 and Complex Networks. He's developed shows for Warner Bros. Studio 2.0, Warner Horizon, Ron Howard's NewForm, MSN, as well as an interactive show for Eko Studios. Currently, Elisha's an Executive Producer on a studio comedy project being taken out to cable networks. As an executive producer, he's found success developing and executing short films and web series with the aim of having them double as proof of concepts for long-form projects.
As a development executive, Elisha works with writers to sharpen their take on each project with a focus on plot and character development. He's also a highly sought after pitch coach, specializing in performance and copy editing.
In the short-form space, Elisha's been nominated for a YouTube Comedy Award, been awarded 5 Vimeo Staff Picks, and featured on the prestigious website "Short of The Week" twice.

Joe Riley is a Manager and Producer at Zero Gravity Management.

Zero Gravity Management is a progressive entertainment company whose strength lies in the development and representation of screenwriters, directors, and actors. Zero Gravity maintains a list of some of the industry's most established professionals in all arenas.

The firm is also a well-respected full-service production company handling the development, finance, execution and sale of projects in film, television and new media. Zero Gravity works with all the major and mini-major studios on a consistent basis, producing feature films and TV series, selling spec scripts, and sourcing open writing, directing and acting assignments.

In the literary world, Zero Gravity’s reputation has been built upon its hands-on development process, working intimately with their clients to generate the most elevated and unique material possible. After twenty-five years of building relationships in the entertainment sector, Zero Gravity has the distinctive skills, experience, and connections to package, produce and finance projects.

They have a tremendous track record of bringing clients’ scripts to screen, and possess a relentless commitment to the projects and people they believe in.