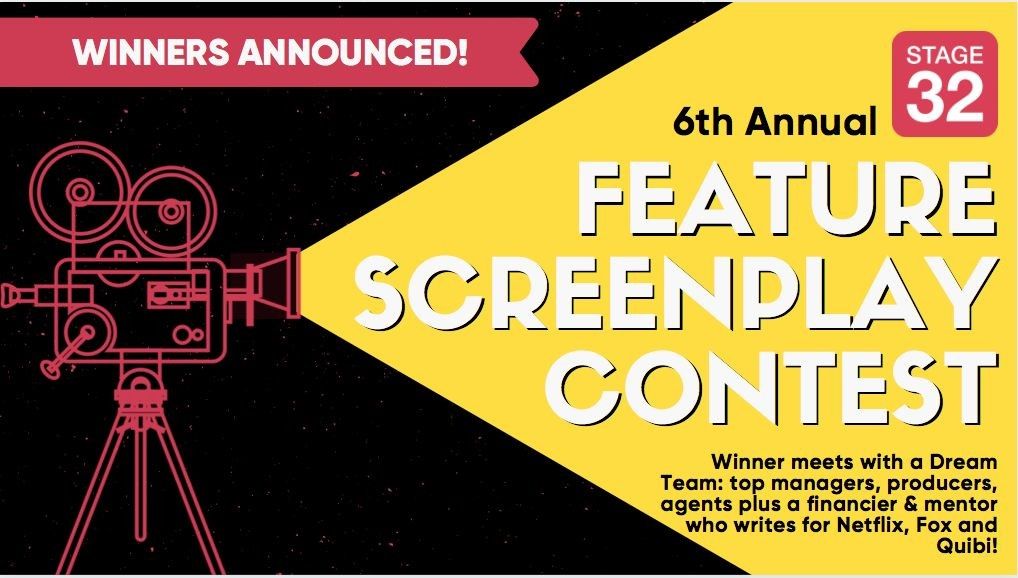 The 6th Annual Feature Screenwriting Contest is closed for submission

THE WINNERS HAVE BEEN ANNOUNCED! SCROLL DOWN TO SEE!!

In addition to meeting industry-leading judges, winners will receive:

One-on-one mentorship from professional screenwriter Tripper Clancy writer of STUBER (FOX), I AM NOT OKAY WITH THIS (Netflix), VARSITY BLUES & DIE HART (Quibi)!

All finalists loglines mailed to over 500 industry executives including, managers, agents, producers, development executives, and financiers!

The competition that has launched screenwriting careers is back! Over a dozen of our past winners and finalists have been either signed, optioned, or are now working screenwriters in the industry! Last Year’s Grand Prize winner, Eric Jeske, in currently negotiating an option for his winning script with a major international producer based off a meeting set by Stage 32!

This year we are welcoming another all-star panel of mentors from Circle of Confusion, Verve, Wonderstreet Entertainment, TCA Mgmt, Cold Iron Productions, Good Fear Management, and Intrinsic Value Films! Our judges have sold dozens of spec scripts and some currently work with writers they've found on Stage 32 (see more info below).

In addition to meeting with the judges, the winning writer will meet one-on-one with screenwriter Tripper Clancy (STUBER, I AM NOT OKAY WITH THIS, VARSITY BLUES, DIE HART) for professional mentorship!

And this is our biggest, most inclusive contest of the year. This contest has produced some of the most sought after material from our finalists and winners. Requests for our finalists scripts have increased year over year and our winners have met face to face with a who’s who of working industry executives and gatekeepers.

No matter what your genre, no matter the size of your project's budget, whether you write indie or studio, small scale or blockbuster, it doesn’t matter. Our judges simply want to find the most talented writers and the more interesting projects from around the world! And this year, it could be you!

Our grand prize winner will be flown to Hollywood to have in person, one-on-one meetings with all our judges and other executives. ALL of our finalists will have their loglines presented our network of over 500 executives we work with in a private section of Stage 32.

All genres of feature film screenplays are welcome.

Here's an update from our 2018 winner Jonathan Jordan:

Tripper is a screenwriter who dabbles in tv and film, comedy and drama. His credits include STUBER for 20th Century Fox, I AM NOT OKAY WITH THIS for Netflix, and two new shows for Quibi: DIE HART, an action-comedy starring Kevin Hart and John Travolta, as well as VARSITY BLUES, a modern day reimagining of the original movie. A graduate of Wake Forest undergrad and The University of Texas grad school, Tripper lives in Los Angeles with his wife, Maggie, and their daughters, Olive and Ruby.

Tracy Christian is a veteran talent agent with more than twenty years in the industry working in both the literary as well as talent space. She currently represents a list of talent that includes Jeremy Piven, Jason Mitchell, and Tisha Campbell. Past clients include Oscar winners Melissa Leo, Octavia Spencer, Mo’Nique, Emmy and Golden Globe winner Elizabeth Moss. Within the lit space she’s personally responsible for more than 1,000 hours of on air primetime programing.

“Early on I remember discovering an agency called IFA. Just five agents representing a list of top tier talent. Until then I didn’t know that it could be done. I thought that as I grew my client’s careers that I’d have to move with them to larger agencies. So that’s why I created TCA. We’re doing something special at TCA; we’re repping talent that we’re insanely passionate about and keeping the list intentionally small so we can give the same attention as a manager with the aggressiveness, access, and deal making skills usually found at larger agencies.”

Kyle Jensen an agent in the Motion Picture Literary department of Verve Talent & Literary Agency. Founded in 2010, Verve has established itself as a premiere literary agency. The company represents writers and directors in the film, television and digital space. The company's philosophy of “artist-first” representation delivers a more personal and hands-on experience.

Prior to Verve, Kyle was a Manager at Maker Studios, a division of the Walt Disney Company, where he led development and oversaw production and programming of multiple simultaneous digital media projects on varying distribution platforms. Created content and innovated multiplatform launch and marketing strategies for new programs based on audience data analysis and trend research. Facilitated cross-functional collaboration with sales, business affairs, and marketing to ensure necessary project support.

Rachel Crouch is the Director of Development at Cold Iron Pictures.

Zach joined Circle of Confusion in 2006 and has worked as a manager since 2011. Zach responds to great character-driven stories regardless of genre and believes great storytelling is a gift that can be honed but not outright taught.

Aimee Schoof is a feature film producer and the co-founder of Intrinsic Value Films with Isen Robbins. She has produced more than 35 feature films. Of those, 10 have premiered at the Sundance Film Festival, 4 at the Tribeca Film Festival, 3 at SXSW, and one each at LA Film Festival, Toronto, Venice, New York FF, New Directors/New Films, and Berlinale.
The company develops, produces and sells independent films that have been distributed worldwide, have won many awards and been honored with numerous nominations. Accolades include winning two Sloan Sundance awards, a Sundance Special Grand Jury prize, and being nominated 5 times by Film Independent as producers. She is both a Sundance and Film Independent Fellows, has worked in international sales attending all major markets, and regularly lectures on film finance and production.
Select produced films include TESLA with Ethan Hawke the upcoming release for IFC, AMERICAN SATAN with Malcolm McDowell, Boo Boo Stewart, and Denise Richards, MARJORIE PRIME with Jon Hamm, Tim Robbins, Geena Davis for Film Rise, EXPERIMENTER with Peter Sarsgaard, Winona Ryder, Jim Gaffigan, and John Leguizamo for Magnolia, BLUE CAPRICE with Isiaiah Washington, Tim Blake Nelson, and Joey Lauren Adams for IFC, RUN with William Moseley, Kelsey Chow, Adrian Pasdar, and Eric Roberts for Millennium Entertainment, ALPHABET KILLER with Eliza Dushku, Cary Elwes, Timothy Hutton for Starz/Anchor Bay, DEATH OF A DYNASTY with Kevin Hart, Rashida Jones, and Chloe Sevigny through TLA Releasing, XX/XY with Mark Ruffalo for IFC.

His client Darren Lynn Bousman is the director of the #1 film in America SPIRAL starring Samuel L. Jackson and Chris Rock.