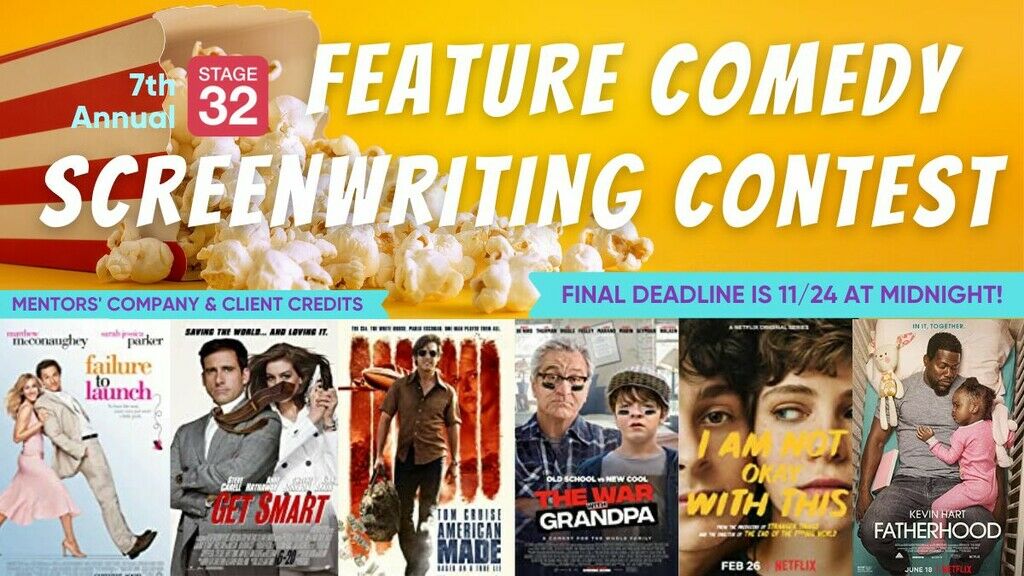 THE WINNER WILL BE PERSONALLY MENTORED BY

Audiences could all use a good laugh right about now! That is why some of the most popular films this year have been comedies, including Kevin Hart’s FATHERHOOD which hit #1 in over 80 countries on Netflix and FREE GUY which premiered at #1 in the US Box Office. Producers, film financiers, agents, and managers are looking for fresh, unique, and inventive Feature Comedy.

As audiences begin to return to movie theaters, everyone is hoping for the same thing: to leave feeling uplifted and with smiles on their faces. And what better escape than a theater filled with laughter? Films like FREE GUY have viewers rolling in the aisles. Streaming services are specializing in quirkier films like SHIVA BABY, AFTERLIFE OF THE PARTY and VACATION FRIENDS, to round out the exciting 2021 comedy scene.

Is your Feature Comedy ready for the most successful comedy screenwriters, producers, executives and managers in the business? Stage 32 is going to bring it straight to them.

Nowhere else do you find top judges and mentors like you do on Stage 32. The Grand Prize winner will be personally mentored by Feature Comedy writer Tripper Clancy (STUBER) and meet the Executive Producer behind FATHERHOOD, and executives at companies behind AMERICAN MADE with Tom Cruise, SIDEWAYS, THE INFORMANT!, THE FAMILY STONE, the screenwriter behind GET SMART, FAILURE TO LAUNCH, and THE WAR WITH GRANDPA, and many more! If you write Comedy this contest could launch your career! No matter if you write Broad Comedy, Romantic Comedy, Family Comedy, Action Comedy, Horror Comedy, or any other subgenre, our judges want to see it!

Matt Ember, Screenwriter (GET SMART, FAILURE TO LAUNCH, THE WAR WITH GRANDPA)

Grant Torre, Stampede Ventures (10 THINGS I HATE ABOUT YOU)

Bring the hysterical moments, hilarious dialogue, and above all - your unique Comedic voice.

Comedies not only prove laughter is the best medicine, but they’re also uniquely suited to show viewers new perspectives and ideas. Be part of the next wave of brilliant, insightful comedy films - and let us help you get your voice heard!

We're looking for Comedy films of all genres, including Broad Comedy, Romantic Comedy, Family Comedy, Horror Comedy, Bromance, Action Comedy, and any other sub-genres you can think of!

All sub-genres of Comedy feature film screenplays are welcome. Please no series or shorts.

Tripper Clancy, Writer/Producer (STUBER, I AM NOT OK WITH THIS)

Tripper is a screenwriter who dabbles in tv and film, comedy and drama. His credits include STUBER for 20th Century Fox, I AM NOT OKAY WITH THIS for Netflix, and two new shows for Quibi: DIE HART, an action-comedy starring Kevin Hart and John Travolta, as well as VARSITY BLUES, a modern day reimagining of the original movie. A graduate of Wake Forest undergrad and The University of Texas grad school, Tripper lives in Los Angeles with his wife, Maggie, and their daughters, Olive and Ruby.

Multi Emmy Award-winning filmmaker and author Shane Stanley has worked in almost every capacity on and off the set with hit shows like ENTERTAINMENT TONIGHT and SEINFELD and producing films like Sony Pictures’ GRIDIRON GANG a #1 box office hit starring Dwayne ‘The Rock’ Johnson. For three years, Shane was Vice President of Sheen/Michaels Entertainment where he produced several motion pictures starring Marlon Brando, Mira Sorvino, Thomas Hayden Church, Donald Sutherland, Marisa Tomei, Sean Penn, John Travolta, and Charlie and Martin Sheen. Shane continues to produce and direct independent films of all levels, including the action thriller BREAK EVEN and action comedy DOUBLE THREAT, currently in production. Shane recently released his book What You Don’t Learn In Film School, which covers filmmaking from concept to delivery and has already landed on required reading lists at several universities across the country.

Danyelle Foord is establishing herself as a driving female force in the entertainment industry. She began her career working for Aaron Kaplan at Kapital Entertainment, where she helped develop numerous television shows, including "LIFE IN PIECES" for CBS, "SANTA CLARITA DIET" for Netflix and "DIVORCE" for HBO.
Danyelle then went on to work at Brian Grazer and Ron Howard’s Imagine Entertainment, where she worked on films such as LOWRIDERS, which opened the 2016 LA Film Festival, and AMERICAN MADE, starring Tom Cruise and directed by Doug Liman.
In 2017, she helped establish Big Cat Productions with founder Alexandre Dauman, and holds the title of Vice President of Development & Production. Danyelle developed and co-produced Big Cat’s first feature film, SUMMER ’03, which premiered at the SXSW Film Festival and was released theatrically by Blue Fox Entertainment in September 2018. Danyelle then went on to co-produce THE DOUGHERTY GANG which wrapped production in November 2018.

Matt Ember is writer/producer who got his start writing for television in the 1990's. He wrote episodes for THE FAMILY MAN, STEP BY STEP, and HARRY AND THE HENDERSONS before turning to producing. He rose up the ranks of television producing on shows like THE WAYANS BROS, LUSH LIFE and THE DREW CAREY SHOW.

Matt returned to writing in the early 2000's, this time in comedy features. His first feature film, FAILURE TO LAUNCH, was a huge hit. The romantic comedy stars Matthew McConoughey and Sarah Jessica Parker, and is still a classic today. He followed it up with another smash, GET SMART, an action-comedy feature based on the classic television show. Stars Steve Carrell and Anne Hathaway made the film an instant success.

Next, he wrote two animated features, EPIC and HOME. Matt returned to producing television in 2019 with THE CONNERS, a spinoff of ROSEANNE. He currently has two more features in production.

This executive is the Creative Executive at a finance and production company whose credits include the Oscar-winning film, MILK along with critically and commercially successful films THE VISITOR, TRUMBO, WIN WIN, along with television series "THE MAGICIANS" and "THE ASTRONAUGHT WIVES CLUB"

She was previously an Acquisitions Executive at Gunpowder & Sky, which has acquired several high profile independently produced projects. Recent projects have been nominated, or won awards, at the Toronto International Film Festival, SXSW Festival, and AFI Fest, among many others.

She is dedicated to creating content with emerging and established talent that impacts pop culture conversations, by empowering creators to take risks in the pursuit of novel stories and formats.

She was formerly an exec at Warrior Poets, the production company of veteran filmmaker Jeremy Chilnick, that produced projects for companies including Roadside Attractions, Magnolia Pictures, and Sony Pictures Classics.

Prior to Warrior Poets, she was at the award-winning production company Scott Rudin Productions, and the production and finance company, Mad Riot Entertainment.

Grant Torre is the Director of Development & Production at Greg Silverman’s media company Stampede Ventures. Starting at the company as a founding employee, his responsibilities include working on development, packaging, and production across the company’s feature slate.

Coming out next is GOING PLACES, a coming-of-age action comedy that Grant produced. Grant began his career in the CAA mailroom the company’s Motion Picture Literary Department.

Andrew Kersey is a Literary Manager and the head of Kersey Management.  Andrew just sold his client's Sci-Fi spec script to Universal with Mike De Luca, the Oscar-nominated producer behind THE SOCIAL NETWORK and the FIFTY SHADES OF GREY movies! You can read more here.

Currently, his client’s comedy VACATION FRIENDS is in production at Broken  Road for Hulu starring John Cena and Lil Rel.

Kersey's incredibly talented clients are working on projects at all the major studios and streaming outlets including Netflix and Amazon, and the networks and cable channels ABC, Fox, NBC, CW, Disney Channel, and Nickelodeon.