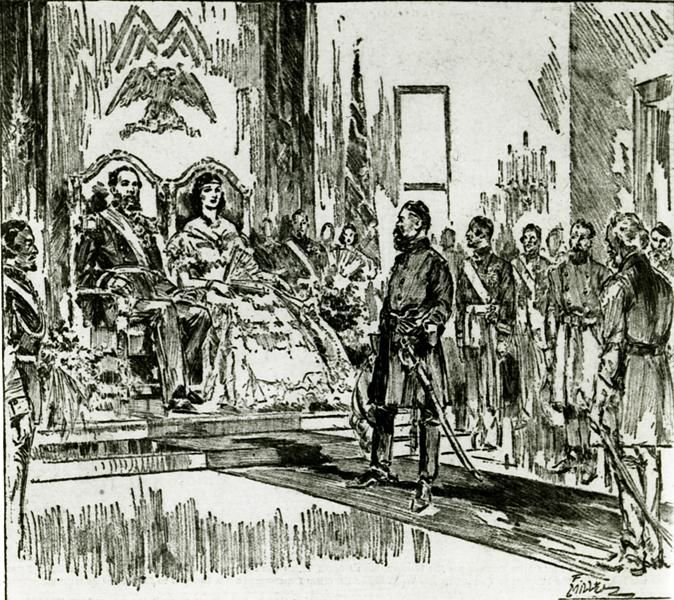 In this true story, at the end of the Civil War, an undefeated Confederate general leads Southern statesmen and officers deep into Mexico with the hope of starting over, only Mexico is embroiled in its own civil war and now its the color of his skin that threatens everything.

"Jo Shelby's Last March" is a true story inspired by firsthand accounts of events recorded by a war correspondent who traveled with General Jo Shelby into Mexico. It is an action-adventure, military drama, historical period piece, exodus story and biopic all rolled into one. It has the American in post-Civil War Mexico grit of Clint Eastwood’s “The Good, the Bad and the Ugly” and the chivalrous heroism of “Dances with Wolves”.

This is a hero driven story about a man who stands fast by his honor and ideals, only he chooses lost causes. He starts out a chivalrous, invincible leader, but becomes the antithesis of his ideals during his time in Mexico. Although he continues to win battles, in the end, he realizes the ideology of the South was wrong and not worth dying for.

ACT I: At the end of the Civil War, Shelby marches south through Texas rescuing towns from renegades, banks from robbers, and horses from Union thieves - all the while out-foxing a Union army hot on his tail. On the way he learns of an American woman being held prisoner by a robber baron in Mexico.

ACT II: We follow Shelby one thousand miles deep into Mexico as he suffers considerable losses. When he finally reaches Monterrey, he finds that instead of receiving reinforcements and being paid, that his contract with the French has been countermanded because the French have decided to pull out of Mexico all together, leaving their puppet Emperor Maximilian to fend for himself. Without French support, Shelby is left high and dry with no money, food or adequate ammunition. Still he manages to find and rescue Miss Inez Walker, with whom he forms an uneasy bond. She warns him to return to the States before he becomes what he despises.

MIDPOINT: Ironically, instead of hiring Shelby and his men to replace the leaving French, Emperor Maximilian offers them a valley in which to establish a colony – but only if Shelby and his men agree to lay down their arms and exemplify to the “modern way of doing business and farming”. But Shelby is no farmer, he's a soldier with no way of supporting himself other than fighting.

So Miss Inez – who has befriended Queen Carlotta - insists on paying Shelby for rescuing her which gives him the start-up money needed for a wagon freight business. Afterwards, as Carlotta Colony begins to show signs of prosperity, families are brought down including Shelby’s wife and sons.

End of ACt II: The rainy season destroys crops and roads and nearby bandits threaten them while Escabedo and Juarez are easily defeating Emperor Maximilian's insufficient forces and proclaiming death to all gringos, Shelby being at the top of their list. Feeling the end is near, there is a mass exodus of foreigners from Mexico City and Carlotta Colony which includes Shelby’s family. But Shelby’s pride and refusal to submit keeps him there. He comes extremely close to death when his wagons are ambushed by Mexican guerrillas outnumbering him by the hundreds but is saved at the last minute by one of the last remaining French legions which happens to be a black unit from Africa. Shelby must now lead this legion to rescue a French officer he abhors. Shelby is greatly impressed by these Chasseurs de Afrique and surprised their captain reads Shakespeare. General Jeanningros promises to pay Shelby for this service later in Cuba. Having money to look forward to and only four men left, Shelby decides to sell his business and head home, no longer believing in the South’s ideology or that there is any future in Mexico.

ACT III: But before his wagons and mules can be sold, what is left of Carlotta Colony is brutally attacked by Escabedo. Shelby and Miss Walker (who are in bed together) barely escape and head for the Port of Veracruz where Escabedo traps them at the end of a pier. Miss Walker makes it to an American ship while Shelby keeps Escabedo at bay. Shelby contemplates suicide but instead dives in among the dead bodies being tossed about by stormy waves. In the still of the next morning, bearing the heavy cloak of guilt over what has happened, he rides a donkey to Mexico City and finds his four friends still alive. Maximilian is glad to see him. In parting, Max gives Shelby his Golden Cross of Guadalupe as “one king of a lost cause to another.”

RESOLUTION: Shelby meets Jenningros in Cuba, gets paid and sets sail for home - far wealthier than when he started out, no longer believing in slavery or judging a man by the color of his skin, and still never having surrendered to another man, just one particular woman.

Dénouement: Actual photos of the major characters with short explanations as to what happened to them.