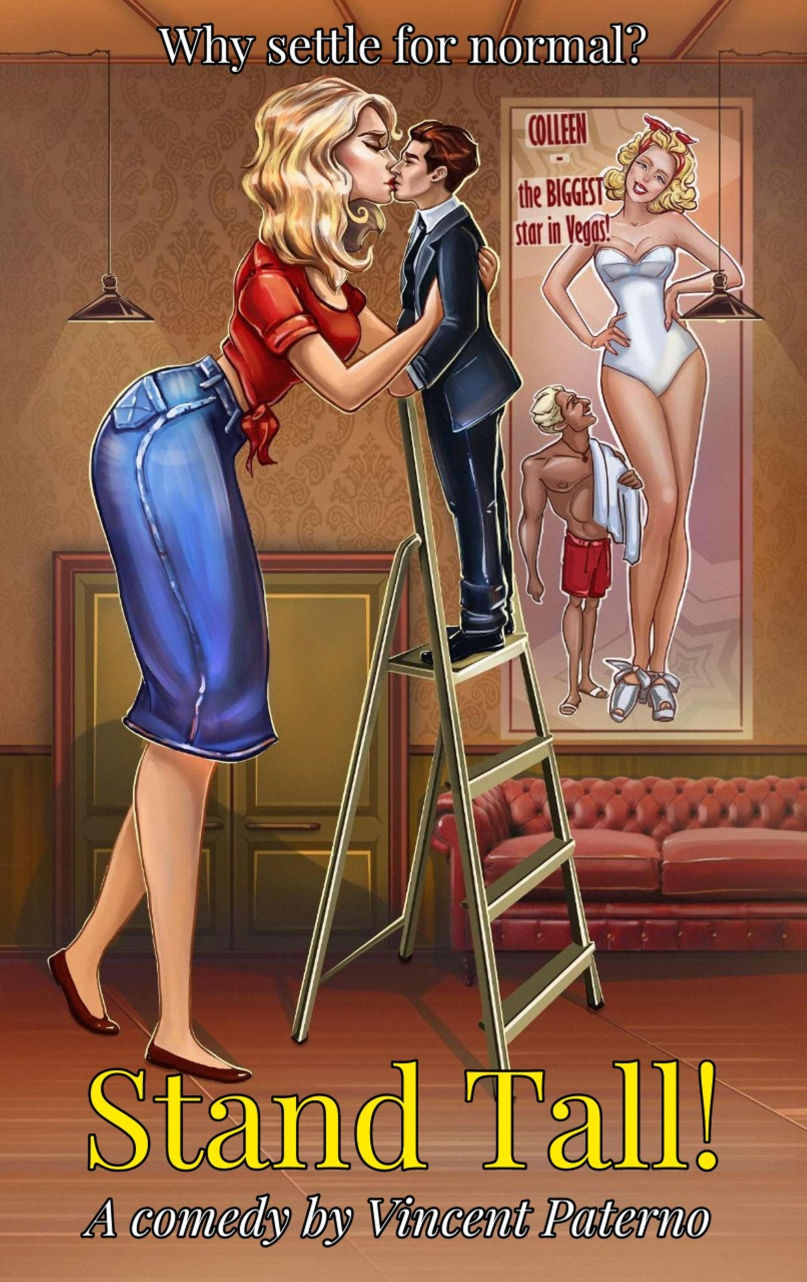 Colleen Cossitt, a pert singing-dancing Las Vegas casino waitress who stands 5-foot-4 3/8, intends to undergo an experimental enlargement from scientist/customer Keswick Fletcher so she can grow to 6-foot-2 (15 percent taller) and become a member of a rival casino's new showgirl troupe secretly run by a blackmailing mobster. Colleen dotes on her 10-year-old nephew because abuse from her ex-husband, who also drained her finances, prevents her from having children. But an accident throws Keswick’s machine (the Resizer) awry, making Colleen's entire body and clothes three times larger. Now 16-foot-1 1/8, she hides in his lab, a converted trucking warehouse, as he and his female aide try to reverse her growth. An old high school flame whom she planned to date discovers Colleen is now a giant and rejects her. After her older sister and nephew move in and it’s discovered her new size won’t kill her, she and Keswick -- who'd been in a fling with a wealthy, vacuous "cougar" ex-showgirl running the troupe -- fall in love.

Colleen is discovered by the casino's eccentric owner, who’d planned to fire her. Instead, coerced by her, he signs Colleen to a $1 million deal to headline at his showroom, with Keswick as her manager to ensure she isn’t exploited. After a disastrous debut where Colleen stumbles over props, leading guests to flee, she briefly considers quitting but publicly apologizes the next day. She soon becomes a star beloved in Sin City, a happy, gentle giant, and repels a romantic challenge from the “cougar," who has teamed with Colleen's money-hungry ex and the mobster. Keswick secretly owes the rival casino owner $154,000 in gambling debt, and is kidnapped by his henchmen after he and Colleen have a falling out and she fires him.

Colleen discovers where Keswick is held from her pal, a dancer who’s the mobster’s girlfriend, and plans to save him but is told rescuing him as a giant could endanger him. She reduces herself to 5-foot-4 3/8 in the new, upgraded Resizer, though it potentially risks her showbiz career. The aide, Colleen's sister (who the casino owner is now smitten with) and her pal join forces to rescue him. They return to the lab, the bad guys in pursuit. Colleen entangles them in her enlarged lingerie, then the Resizer reduces the mobster, her ex and the "cougar" to one-third scale. The now-puny mobster agrees to waive all of Keswick’s debt.

Colleen glumly finds she can't grow back, decides to retire and accepts Keswick's backstage marriage proposal before her benefit farewell performance. While singing him a love song to close the final show, the new Resizer’s shrinking effect wears off and she returns to triple scale (as the three villains back at the lab, locked inside a covered crib and playpen, grow back to normal size). Keswick tells Colleen he'll live up to his word and marry her, just as she earlier promised to protect him. She proudly announces both her return to performing and their engagement to a delighted crowd, as Keswick gets a call seeking the re-grown Colleen to star in a movie.

Vincent, thanks for posting!

Did you ever make this Vincent? I think it looks fun!

Not yet. Need to find a producer, as well as an actress who could capture Colleen -- people adore her character!