Sam Alper is a screenwriter who worked on FX’s "Better Things" Seasons 1-3. He has also worked as a Writer’s Assistant, Showrunner’s Assistant, AP, Researcher and Script Coordinator on productions for Amazon, CBS, ABC and HBO! Sam just signed onto the new AMC series, "Kevin Can F*** Himself." Jason Mirch is Stage 32's Director of Script Services and host of the Writers' Room. Outside of this role, he is a feature film, television, branded entertainment, and digital content producer and executive with over 15 years experience. Most recently, he produced a 3D animated feature film starring Jacob Tremblay, Christopher Lloyd, Mel Brooks, and Carol Kane. Full Bio » 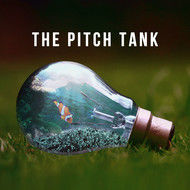 Sam Alper is a screenwriter who worked on FX’s "Better Things" Seasons 1-3. He has also worked as a Writer’s Assistant, Showrunner’s Assistant, AP, Researcher and Script Coordinator on productions for Amazon, CBS, ABC and HBO! Sam just signed onto the new AMC series, "Kevin Can F*** Himself."

Jason Mirch is Stage 32's Director of Script Services and host of the Writers' Room. Outside of this role, he is a feature film, television, branded entertainment, and digital content producer and executive with over 15 years experience. Most recently, he produced a 3D animated feature film starring Jacob Tremblay, Christopher Lloyd, Mel Brooks, and Carol Kane.

HAPPY 100TH WEBCAST! We're jumping in the Writers' Room Pitch Tank for #100 with special guest, Literary Agent Ariella Carmell of PureFlare Talent! Ariella has been specifically tasked with building the literary department from the ground up! PureFlare is one of the fastest growing bi-coastal, boutique talent and literary agencies, representing talent nationwide. They are known for cultural diversity and represent clients across film, television, theatre, and more. Clients have appeared in projects such as GUARDIANS OF THE GALAXY, GREY'S ANATOMY, LEGALLY BLONDE, NO COUNTRY FOR OLD MEN, THE OFFICE, LETHAL WEAPON, and many more. Previously, Arielle held positions at 21 Laps Entertainment and Red Wagon Entertainment. She was named the 2019 Michael Collyer Memorial Fellow in Screenwriting by the Writers Guild of America, East. During this pitch session we heard from writers across the world who pitched a variety of projects including a supernatural and psychological thriller, a sports comedy, a historical series about the Slavic Dark Ages, a "MomCom", and many more!

We're diving into the Writers' Room Pitch Tank with special guest, Producer Colleen Marshall! Colleen Marshall is a producer who focused on high-concept, character-driven content. Colleen produced the indie film THE BACHELORS, starring Academy Award winner J.K. Simmons, as well as the sequel UNBROKEN: PATH TO REDEMPTION for Universal 1440 Entertainment.  She has a number of projects in development and just sold a series to a major streaming platform. Prior to launching her development and production venture, she first worked in the literary department at the Gersh Agency in Beverly Hills. She then helped open the LA-based office of Random House Studios, focusing on book-to-television adaptations.

We've got another fantastic Pitch Tank Webcast with special guest, Senior Coordinator Janean Jeffries of ViacomCBS! Janean works directly with the Executive Vice President Head of Production for MTV, VH1, CMT, Paramount TV, Logo, Smithsonian Channel, MTV Studios, TVLand, Pluto TV, Comedy Central, and Pop. Janean has over 15 years experience in the entertainment industry, giving her a broad knowledge of what executives want and need on their screens. Previously, Janean worked for Love Life Entertainment & CBS Films. During the webcast we heard excellent pitches across the spectrum, from Action Adventure and Sci-Fi to Character-driven Drama and even TV-series.

Producer Tiegen Kosiak joins our Panel as we listen and read your pitches live to help educate the Writers' Room screenwriters on what is and isn't working in their pitch.

In this Pitch Tank webcast, we welcome producer Aimee Schoof of Intrinsic Value Films. Aimee has produced more than 35 feature films! Of those, 10 have premiered at the Sundance Film Festival, 4 at the Tribeca Film Festival, 3 at SXSW, and one each at LA Film Festival, Toronto, Venice, New York FF, New Directors/New Films, and Berlinale. Among many of her notable films, she produced TESLA with Ethan Hawke, AMERICAN SATAN with Malcolm McDowell, MARJORIE PRIME with Jon Hamm, EXPERIMENTER with Peter Sarsgaard, BLUE CAPRICE with  Isiaiah Washington, Tim Blake Nelson, DEATH OF A DYNASTY with Kevin Hart and Rashida Jones, and XX/XY with Mark Ruffalo. She has expanded into television and currently has a slate of scripted and unscripted projects and feature films in all phases of production. And on top of all of that, Aimee is also a partner in the comic book publishing company Red Giant Entertainment, developing comic book properties for film and TV! During the webcast, we hear pitches that range from Sci-Fi to Supernatural in both film and television! Aimee provides some incredible insights and provides her 2 key pieces of advice to keep in mind while pitching!