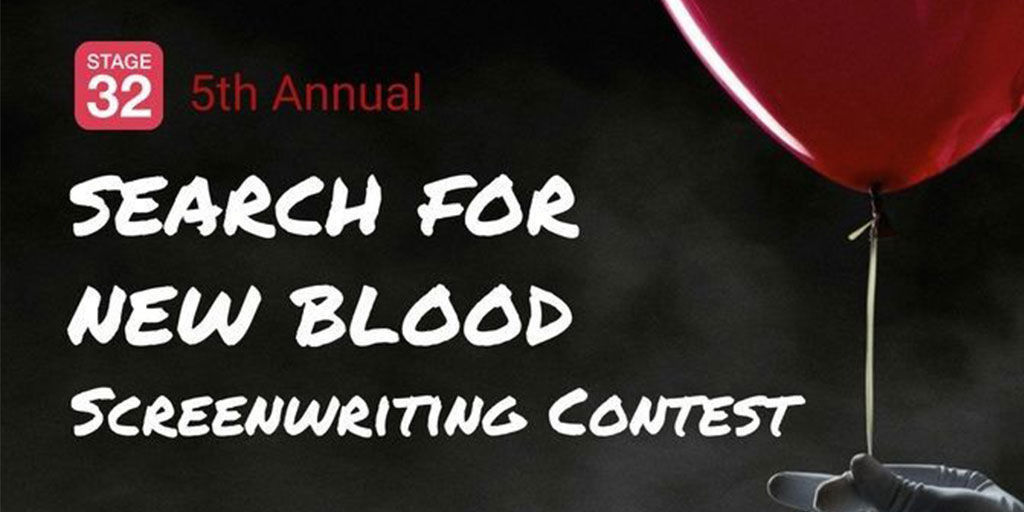 THE GRAND PRIZE WINNER HAS BEEN ANNOUNCED! CONGRATULATIONS TO CHRISTINA PAMIES AND HER SCRIPT 'A GOOD DEED'!

Winner gets a mentorship with the writer of Jigsaw, Pete Goldfinger, PLUS gets flown to Hollywood and set up on meetings with executives from Blumhouse, Darren Aronofsky's Protozoa Pictures, and producers who have worked on Halloween, Haunt, Freddy vs. Jason and more!

ALL finalists get their material exposed to executives!

Winners and finalists from the last 4 New Blood contests have been produced, signed or in development! (See more below!)

It’s back! The thrills, chills, the horror of it all. The most popular horror and thriller screenwriting contests is here! It’s the 5th Annual Search for New Blood Contest.

We’re looking for the next A Quiet Place, Get Out, Hereditary, Witch, Red Sparrow, Unsane, John Wick, It Comes at Night, Happy Death Day, 47 Meters Down, The Meg, Atomic Blonde, The Shallows or whatever horror or thriller concept your twisted mind can dream up.

We're giving one deserving writer the opportunity of a lifetime. Our Grand Prize Winner will not only be flown to Hollywood for meetings with industry executives at Blumhouse, Darren Aronofsky's Protozoa Pictures and more, but he or she will also be mentored by the writer of Jigsaw, Pete Goldfinger.

Plus ALL our finalists will have their material exposed to a full list of industry executives. Last year's finalists were requested by The Cartel, Gotham Group, Good Fear Film + Management, Bohemia Group Originals and more.

How's that for opening doors and creating opportunity?

You can see why so many executives who work within the horror / thriller / suspense genre love the Search for New Blood!

Stage 32 is looking for scripts in all areas of horror, thriller, and suspense. We welcome all feature screenplays in the horror / thriller genre. All micro-budget, low budget, mid level budget and blockbusters screenplays welcome. If your script fits in with any of these examples below, it’s a fit for this contest! **Please note this contest is for full-length screenplays only. No short scripts or teleplays will be accepted.

For an additional fee of only $49 (50% savings!) you can receive full coverage from our industry readers on your screenplay or teleplay. Just check "coverage" upon checkout.

The Stage 32 Search for New Blood contest is not associated with The Blood List.

"I have nothing but high praise for the folks at Stage 32. Because of meetings they set me up on I am now working with Mike DeTrana from Anvil Entertainment, have director John Poloquin from Grave Encounters 2 attached to my script, and an option for financing from Three Point Capital. One of the meetings was with Daniel Bekerman, the producer of The Witch. I wrote a horror screenplay and I got to talk with the producer of one of the greatest horror films the last decade. That's got to be viewed as something good. He didn't agree to produce the film, but he did offer his company to assist us with securing grants and tax incentives if we shot up in Canada. Again, that's a pretty damn good measure of success for a contest."

“It’s surreal. It’s changed our work life and we’re working in a professional realm that we’ve never worked in before. We’ve been struggling writers for a long time and when we found out we won, we were super stoked. Stage 32 put us out there on a bunch of meetings with production companies, managers and agents. We signed with HG5 Entertainment and are writing 2 scripts, which 1 is going into production this year. It’s changed our life.”

"Speaking as a screenwriter to all my fellow writers, I highly recommend submitting to any and all Happy Writer's Writing Competition. I came in 2nd in the Search for New Blood Horror competition and it at very least exposes you and your work to industry professionals. To get that kind of eyes on something you've written, whether you end up selling your screenplay or not, is a great experience. All my best to all!"

"My only wish was to find this site sooner for the sake of saving time, discovering in-depth educational value, and making legitimate connections. I have to tip my hat at RB and the gang for changing the game and helping shape my future in filmmaking. I’m honored to be swimming in a community of like-minded individuals. I’m proud to be Stage 32’s HAPPIEST WRITER right now!"

- Frank Ponce, Stage 32 Happy Writers Search For New Blood Contest, 2014; Signed with 3 Arts Entertainment and his script has been picked up for development by Atlas Entertainment (The Dark Knight, American Hustle)

The Stage 32 Happy Writers Search for New Blood contest is not associated with The Blood List.

Pete Goldfinger is an incredibly successful feature and television writer in Hollywood perhaps best known for penning the two newest features in the SAW horror universe, including JIGSAW, which grossed over $100 million, and SPIRAL, starring Samuel L. Jackson and Chris Rock, which debuted at number one at the box office this year. Other credits of Peter’s include SORORITY ROW, PIRANHA 3D and TV shows like TEENAGE MUTANT NINJA TURTLES and AVATAR: THE LAST AIRBENDER. When he’s not writing for the screen, Pete is running and hosting his own screenwriting retreats, in-person workshops, and Zoom classes.

Nick Phillips is the Producer and Director at the production company PBR Streetgang. A former studio executive with over 20 years experience in both creative development and physical production, Nick has done extensive location work all over the world and recently expanded into directing.

Nick started his career in New York with a nine year stint under the Dimension Films label. While there, he was involved in franchises including SCREAM, HALLOWEEN, HELLRAISER, THE CROW, and HIGHLANDER. He moved to the Dimension LA office in 2003, during which time he appeared on Season 3 of "Project Greenlight", which aired on Bravo, helping shepherd the film FEAST through production and launching a new franchise in the process. By the time he left Dimension, he had risen to the post of Vice President of Production.

In 2005, Nick went to work for Sony Pictures Entertainment where he helped create the micro budget genre division Stage 6 Films, under Peter Schlesell. While there he worked on successful sequels to 30 DAYS OF NIGHT and VACANCY, among others. He soon after moved into a position at Sony Screen Gems, working under Clint Culpepper, where he was involved with franchises including UNDERWORLD and RESIDENT EVIL.Nick then went on to serve as EVP of Revolver Picture Company, a fully financed independent genre label he co-­founded in 2012 with veteran casting director Kelly Wagner (THE GRUDGE, HOSTEL). During his time there, they produced the genre features PET, HAUNT, BENEATH, and DEVIL'S BACKBONE, TEXAS and co-­financed and produced the horror reality TV pilot "Fight of the Living Dead" with Alpine Labs and Blackbox TV.

Rachel Foley is a producer for Darren Aronofsky's Protozoa Pictures. Protozoa is responsible for films such as Mother!, Aftermath, Jackie, Black Swan and more.

Ben Stillman is Senior Vice President of Black Bear Pictures, where he has worked since the company’s formation.

Ben has been a part of the creation and production of a number of films while at Black Bear. Most recently, Ben produced BARRY, directed by Vikram Gandhi, which sold to Netflix after premiering at the 2016 Toronto International Film Festival. He is Executive Producer of GOLD, directed by Steve Gaghan and starring Matthew McConaughey, Co-Producer of BROKEN CITY and A.C.O.D., and Associate Producer of AT ANY PRICE. He was also actively involved in the development and production of eight-time Academy Award-nominated THE IMITATION GAME, directed by Morten Tyldum and starring Benedict Cumberbatch and Keira Knightley.

In 2016, Ben was named one of Variety’s Ten Producers to Watch. He has also served on the Board of Directors for prominent Canadian distributor Elevation Pictures.

Prior to Black Bear, Ben worked at Cinetic International, selling international distribution rights for such films as EXIT THROUGH THE GIFT SHOP, MEEK’S CUTOFF, and Diego Luna’s ABEL.

Ben earned a Bachelor of Arts in Film Studies and English with a concentration on Creative Writing from Stanford University. He lives in Los Angeles.

Doug recently served as Line Producer and Production Manager overseeing extensive re-shoots on IM Global's "Fifty Shades of Black". Curtis also served as Executive Producer and Unit Production Manager on Relativity Media's "Shark Night". He was also Executive Producer on a number of New Line Cinema Feature films including: "Shoot 'Em Up", "Cellular", "Freddy vs. Jason", "Friday After Next", "All About the Benjamins" and "Next Friday".

Douglas Curtis' extensive career in the entertainment industry covers a wide variety of genres ranging from science fiction to horror to comedy to action films.

Curtis was co-producer and Unit Production Manager on Zide-Perry Entertainment's "Repli-Kate", MTV/Paramount Pictures,' "The Wood" and HBO's "Shadow of Doubt". He also worked as a co-producer/Line Producer on Paramount Picture's "Save the Last Dance". As a producer, his credits include MGM/Rysher Entertainment's "The Eighteenth Angel", "Gunfighters Moon" and "Judicial Consent". For Trimark Entertainment Curtis produced "The Philadelphia Experiment II". For New World Pictures he produced "The Philadelphia Experiment", "Black Moon Rising" and "Nice Girls Don't Explode". He both produced and directed "The Sleeping Car" and "The Hazing". He has also served as 2nd unit director on a number of his films including "Black Moon Rising" and "Judicial Consent". Among Curtis' other credits are "Madame Claude 2", "The Night the Lights Went Out in Georgia" and "Take This Job and Shove It on which he served as a production supervisor for Avco Embassy Pictures. Curtis currently serves as CEO-Founder of Quarter Town Films (QTF) a Los Angeles based development and production company where he is developing a number of feature film projects including "The Money Cave", a family film, in the vein of Goonies and Stand by Me, which was written by and will be directed by Thomas Koveleskie, his partner at QTF.